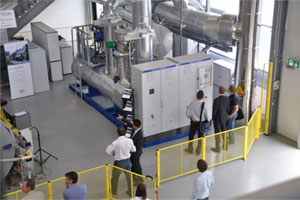 as manufacturers seek processes that are more energy efficient. Renewable options include technology such as Organic Rankine Cycle (ORC) — a process that uses waste heat to generate electricity through an evaporation process — where manufacturers can direct the electricity back to their own manufacturing or send it to public power grids.

ORC systems from can be used with many different sources of waste heat, including stationary combustion engines that run on renewable resources such as biogas systems, gas turbines or wood-fired furnaces. In a multi-year field trial coordinated by the Fraunhofer Institute UMSICHT, Oberhausen, Germay, nine ORC field test systems of Dürr Cyplan have been running flawlessly, some for three years, showing stability in continuous operation of the technology.

Another milestone is the first system from Dürr Cyplan to be fully optimized for CHP operation (combined heat and power), which started operations in a biogas plant in October.