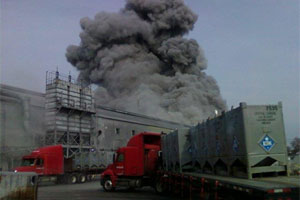 The U.S. Chemical Safety and Hazard Investigation Board (CSB) will hold a public meeting on February 7 to present the findings from its investigation into the March 21, 2011, fire and explosion that occurred at the Carbide Industries facility located in Louisville, Ky.

The accident fatally injured two workers, and two others were hurt when an electric arc furnace (EAF) over pressured and emitted powdered debris, hot gases and molten calcium carbide. The hot gases and debris blown from the furnace broke through the double-pane reinforced glass window of the control room, severely burning the two workers inside. They died within 24 hours from burn injuries.

“The CSB’s public meeting will present the formal findings and safety recommendations resulting from this tragic accident," says Rafael Moure-Eraso, CSB chairperson. "I encourage members of the public to attend the CSB’s meeting.”

The meeting will take place at the Seelbach Hilton, located at 500 Fourth St. in Louisville, in the Medallion E&F Salon at 6:30 p.m. EST.

The meeting will include a public comment period, where members of the audience may comment on the board’s findings and recommendations.