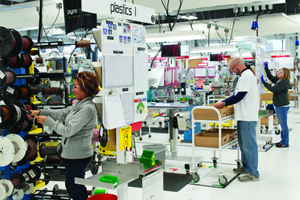 Fort Wayne-based Pyromation Inc. was recognized by the state’s Chamber of Commerce as one of the 2013 “Best Places to Work in Indiana.”

Company representatives including President Pete Wilson, attended the award ceremony and dinner held at the J.W. Marriott in downtown Indianapolis in early May. Wilson accepted the award for Pyromation, which was the highest-ranked medium size business from Fort Wayne. Medium-sized businesses were classified as those with 75 to 249 U.S. employees. Pyromation was one of the few manufacturing operations recognized in 2013.

Each year the Indiana Chamber recognizes companies throughout the state “that have set the standard for workplace excellence.” This is the eighth year the "Best Places to Work" program has recognized in-state companies. In 2013, a record 100 companies were honored as part of the “Best Places to Work in Indiana” rankings. For the first time, winners were selected in four categories according to number of employees. Pyromation was ranked 19th among the 28 companies that made the list in the medium group.

Pyromation received the award in a year in which it is celebrating the 10-year anniversary of the application of lean principles, which have improved enterprise efficiency and also enhanced team member involvement. As part of lean, the company developed idea programs that encouraged the company’s team members to provide more than 23,000 ideas that have improved operating efficiencies and reduced waste over the past decade. Some of the gains realized by Pyromation’s success are distributed through a team member bonus program.