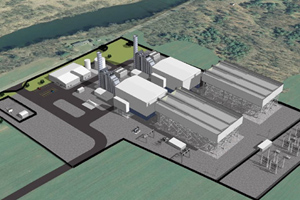 Siemens has received an order for two power plant blocks for the Liberty combined cycle power plant in Pennsylvania.

Siemens will deliver two H-class gas turbines, two steam turbines, two generators, two heat-recovery steam generators as well as the electrical equipment and the control system. The order includes a long-term service agreement and has a total value for Siemens of approximately $400 million.

The gas turbines and generators will be manufactured in the Siemens North American manufacturing hub in Charlotte, North Carolina. Siemens Financial Services is providing financing to aid in the project’s construction through a $50 million term loan.

With a combined cycle output of approximately 829 MW, Liberty will be one of the most advanced gas-fired power plants in the northeastern United States when it goes into commercial operation in 2016, says the company. Glastonbury, Conn.-based Gemma Power Systems LLC, an affiliate of Panda Power Funds in Dallas, is the engineering, procurement and construction contractor.