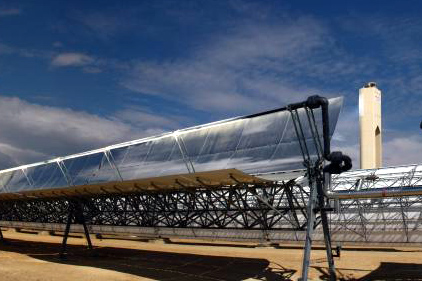 Abengoa was selected by the Department of Energy of South Africa to develop Xina Solar One, a 100 MW parabolic trough plant with a five-hour thermal energy storage system using molten salts. The project will form the largest solar complex in Africa together with Abengoa's plant KaXu Solar One, currently under construction in the country.

The new project will be constructed close to Pofadder, a city in the north of the Northern Cape Province, next to KaXu Solar One. These two 100 MW plants will jointly shape the largest solar complex in Africa.

The parabolic trough technology employs parabolic-shaped mirrors that are set on a structure so they can track the movement of the sun and concentrate solar radiation onto a receiving tube. Inside the tube, a heat-absorbing fluid flows and reaches high temperatures. This fluid transfers the thermal energy to a heat exchanger, and then it is used to heat water into steam, which ultimately drives a turbine to generate electricity.

Additionally, the plant uses the thermal energy storage technology that ? with a set of thermal storage tanks filled with molten salts ? gives the plant the ability to generate electricity after the sunset or in transitory cloudy periods as well as the ability to adapt energy production to the peaks of demand. Xina Solar One will produce the clean energy equivalent to that needed to power approximately 90,000 households.

Xina Solar One was awarded to Abengoa in the third round of renewable energy projects organized by the Department of Energy of South Africa, which is part of the national strategy to introduce up to 17,800 MW of renewable energy by 2030. Abengoa is currently building two other concentrating solar power (CSP) plants in South Africa. Abengoa currently has 1,223 MW in operation and 430 MW under construction, using both, concentrating solar power (CSP) and photovoltaic technology.

Xina Solar One's construction is expected to begin in 2014. Xina Solar One will belong to a consortium, 40 percent of which is controlled by Abengoa. Other constituents of the consortium are the Industrial Development Corp. (IDC), the Public Investment Corp. (PIC), and KaXu Community Trust.