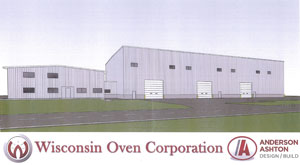 Marking its 40-year anniversary with record shipments and record growth, Wisconsin Oven Corp., East Troy, Wis., plans to kick off the next 40 years with a plant expansion.

In mid-November, the East Troy Village Board granted approval for Wisconsin Oven to proceed with construction of a nearly 29,000 ft2 addition to its Young Street facility.

The building expansion will measure 120 by 240 by 50 feet, and it will house two 20-ton cranes and two 10-ton cranes to accommodate large equipment orders. Wisconsin Oven plans to have the expansion ready for manufacturing by April 2014.

The approval comes as Wisconsin Oven celebrates its 40th anniversary. The company was founded by Henry Kubicki on November 16, 1973, at 2027 Young St., East Troy, Wis. The first order taken was from an OEM customer, Systemation, and was destined for Canada. By the end of the month, four people were employed.

The entrepreneur ran the company for 30 years and passed in March 2003. He developed a business model in which the employees and management purchased shares, and upon his passing, the company became employee owned. Since 2003, Wisconsin Oven has overcome former shareholder debt and accomplished record growth. In 10 years, the company has doubled its revenue and shipments.

Dave Strand, president and CEO, has been employed at Wisconsin Oven for over 27 years. He credits the growth and success of the company to a “culture of champions.” The company recognizes and rewards employees who possess a “whatever it takes” attitude and achieve champion performance.