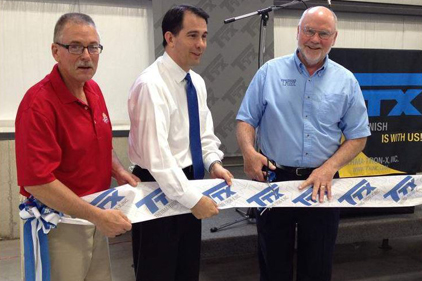 A Sturgeon Bay, Wis.-based manufacturer of complete finishing systems welcomed Gov. Scott Walker to its ribbon-cutting ceremony for a nearly 27,000 ft2 addition, which marks the fourth addition in three years. Therma-Tron-X Inc. added a 4,000ft2 to its environmental division was completed in 2011; a 940-ft2 addition for its engineering team in 2012; and a 15,080-ft2 manufacturing addition in 2013. The company also has added 50 new jobs since 2012.

“The growth of this family-owned business is a testament to the strength of the company and their commitment to the community and the state,” Governor Walker said during the event. “This is just one of the many economic success stories that we are seeing in northeastern Wisconsin as well as the entire state.”

During the ceremony, Therma-Tron-X owner Brad Andreae noted how he never imagined the company’s growth when he first moved to Sturgeon Bay in 1971 and was temporarily living out of a tent. In the beginning, according to Andrae, his father, Otto Andreae, and co-founder Rusty Sherman, had little time for anything but work.

In addition to manufacturing custom-built industrial ovens, the company designs and builds custom water and wastewater systems, as well as paint systems.