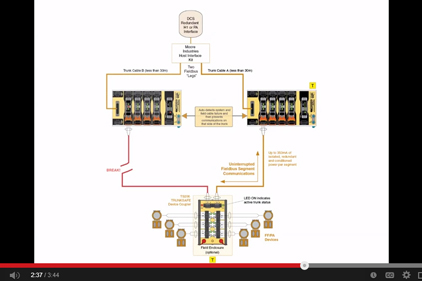 The video describes how a fieldbus-induced shutdown at an oil refinery can cost up to $500,000 an hour. According to Moore Industries, before its Trunksafe product was released, engineers at oil refineries, natural gas sites and other locations had to duplicate each piece of the segment, including H1 cards, power conditioners, device couplers and field devices, to ensure a fault-tolerant, redundant fieldbus solution. The relatively costly approach also required special software and programming.

The video shows how the fault-tolerant fieldbus system uses two physical trunk cable legs to ensure that no single point of failure will shut down an entire network. The system’s power conditioners detect, report and isolate a faulty fieldbus leg while allowing system communications to continue on the healthy leg. Simultaneously, system's device coupler detects the absence of DC power on the faulty leg and activates its automatic segment terminator. This allows normal fieldbus communications to continue while internal blocking circuitry prevents a short-circuit on one leg from affect the other leg.

The video uses a demonstration panel and animation to show how the system works. It is one in a series of videos produced by Moore Industries for its video library. It can be viewed on the company's website or its YouTube channel.