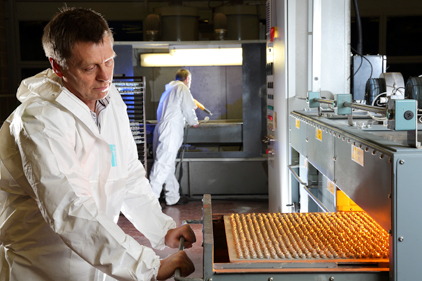 A three-zone, carbon infrared medium-wave oven from Heraeus Noblelight is helping SFS Intec, Leeds, United Kingdom, to improve the flexibility and quality of its powder coating operations. It has allowed the company to change its powder curing operation from a continuous to batch. The pyrometer-controlled oven delivers a more consistent coating quality yet is more energy efficient and requires less space than the previous curing system.

SFS Intec is part of a Swiss-owned international group involved in many industrial activities. The Leeds site, which has produced fasteners for more than 100 years, develops and manufactures stamped parts and supplies multifunctional thread rolling screws and subassemblies for use in the construction industry.

As part of the manufacturing process, the screw heads must be coated to resist corrosion. In the former system, the powder coating was cured using an electrically heated oven, through which the screws passed continuously on a conveyor belt. This was energy intensive because the oven had to be heated up to temperature and held at that curing temperature for some time. For SFS Intec, the continuous operation lacked flexibility. It could not respond quickly to changes in color or to customer demands for the quick delivery of a limited numbers of screws. This often happens in the construction sector, especially in the closing stages of a construction contract.

To solve these problems, SFS Intec contacted Heraeus, which designed, manufactured and installed a carbon infrared medium-wave curing system. It is a three-zone oven with seven 4 kW medium-wave infrared emitters in each zone. Medium-wave radiation is readily absorbed by powder coatings and allows rapid and efficient curing.

In operation, trays of coated screws are now manually loaded into a selected zone and the emitters are switched on. The curing temperature of 356°F (180°C), monitored by an integral pyrometer, is achieved in a matter of seconds, rather than the 30 minutes or so required by the previous system, and a digital timer is then set to determine the time that the screws need to be held at the curing temperature. All three zones are individually loaded and controlled so that three different batches of screws can be cured simultaneously, if required.

Bob Mrozik, the technical services manager at SFS, said that the process allows the company to respond more quickly to last-minute customer requests. He also noted that the pyrometer control gives a more consistent cure compared to merely controlling the oven air temperature.