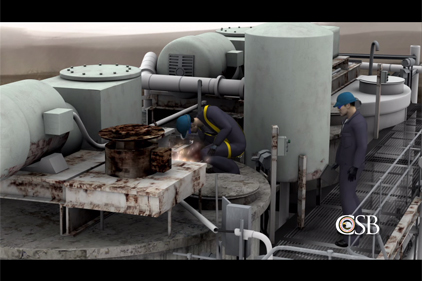 The danger of hot work on tanks that contain organic or biological material were the focus of remarks by U.S. Chemical Safety Board chairperson Rafael Moure-Eraso, made in response to a tank explosion at an Omega Protein facility in Mississippi that killed a contract worker and injured another on July 28.

The CSB continues to draw attention to the special safety precautions necessary for hot work. Among its recommendations are to require atmospheric monitoring inside tanks before and during any hot work as well as to require all process piping, including vent lines on tanks, be positively isolated before authorizing hot work. The CSB produced several videos relating to hot work explosions it has investigated. In addition, its “Dangers of Hot Work” safety video uses 3-D computer animations to depict three of the hot work accidents.

As relates to the Omega Protein incident, a team of investigators deployed by the CSB discovered that the incident occurred during hot work on or near a tank containing 8" of a slurry of water and fish matter known as stickwater. In the explosion, the lid of the 30' high tank blew off. Laboratory testing ordered by CSB investigators found signs of microbial activity  such as volatile fatty acids and off-gassing of flammable methane and hydrogen sulfide in samples of the stickwater in the tank. Because the water inside the storage tank was thought to be nonhazardous, no combustible gas testing was done on the tank contents before starting the hot work.

“This tragedy underscores the extreme importance of careful hot work planning, hazard evaluation and procedures for all storage tanks, whether or not flammable material is expected to be present,” said Moure-Eraso’s in a statement. “Hot work dangers are not limited to the oil, gas and chemical sectors where flammability hazards are commonplace.”

The CSB has examined three fatal hot-work incidents that involved tanks of biological or organic matter. Three workers were killed at the Packaging Corp. of America in July of 2008 as they were performing hot work on a catwalk above an 80' tall tank of white water, a slurry of pulp-fiber waste and water. CSB laboratory testing identified anaerobic, hydrogen-producing bacteria in the tank. The hydrogen gas ignited and ripped open the tank lid.

In February of 2009, a welding contractor was killed while repairing a water clarifier tank at the ConAgra Foods facility in Boardman, Ore. That tank held water and waste from potato washing. A CSB investigation found that water and organic material had built up beneath the base of the tank and decayed through microbial action, producing flammable gas that exploded.

Mixtures of water with fish, potatoes or cardboard waste could understandably be assumed to be benign and pose little safety risk to workers. Chairman Moure-Eraso noted that it is vital that personnel and companies recognize that in the confines of a storage tank, seemingly non-hazardous organic substances can release flammable gases at levels that cause the vapor space to exceed the lower flammability limit. Under those conditions, a simple spark or even conducted heat from hot work can prove disastrous. CSB recommendations include combustible gas monitoring in places when welding or other hot work is planned near storage tanks or adjacent places.

"I urge all companies to follow the positive example set by the DuPont Corporation, after a fatal hot work tragedy occurred at a DuPont chemical site near Buffalo," Moure-Eraso. "Following CSB recommendations from 2012, DuPont instituted a series of reforms to hot work safety practices on a global basis, including requirements for combustible gas monitoring when planning for welding or other hot work on or near storage tanks or adjacent spaces."