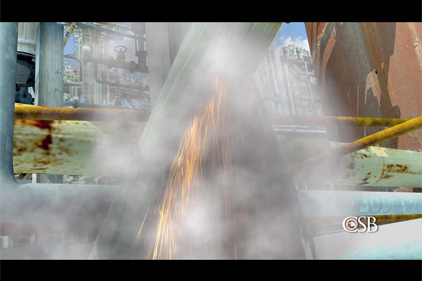 A report on catastrophic pipe rupture at the Chevron U.S.A. Inc. Refinery in Richmond, Calif., in 2012, is the focus of a public hearing on January 28. The U.S. Chemical Safety Board will present its third and final investigation report and safety recommendations from the August 6, 2012, crude unit fire. The fire endangered 19 workers and sent more than 15,000 residents to the hospital for medical attention. The CSB released a safety video detailing the root causes of the incident.

The draft report has been released for review by stakeholders. It focuses on gaps in current industry guidelines and shortcomings in Chevron’s safety culture and emergency response. The CSB's previous reports on this incident identified safety deficiencies that occurred over the years prior to the vapor release and fire as well as root causes and safety recommendations.

According to the CSB, the investigation report details failures in Chevron’s emergency response on the day of the incident, asserting that Chevron did not effectively identify a likely piping damage mechanism and the possibility of catastrophic rupture. In addition, Chevron had no leak response guidance or formal protocol for operations personnel, refinery management, emergency responders or the Incident Commander to refer to when determining how to handle a process leak.

In addition, the CSB found shortcomings in industry standards related to comprehensive inspection, effective facility upgrades and the need for minimum safety requirements. The American Petroleum Institute (API) have published several codes, standards, and recommended practices on sulfidation corrosion and response to hazardous process fluid leaks; however, the guidance is inconsistent and permissively written. Based on the investigation findings, the draft report makes recommendations to the American Petroleum Institute to establish and strengthen minimum requirements for preventing potentially catastrophic sulfidation corrosion failures and leak response safety guidance.

The report’s draft recommendations to Chevron seek to ensure more effective corporate oversight in the implementation of internal safety guidance and industry good practice. The draft recommends to Contra Costa County and Richmond, California improvements to their Industrial Safety Ordinance (ISO) to provide stronger regulatory oversight with community involvement to the existing safety culture review program for covered facilities such as the Chevron refinery.

The hearing is free and open to the public.  It will be held at 6 p.m. at 440 Civic Center Plaza in Richmond. At the conclusion of the public comment period, the board will consider whether to approve the final report and safety recommendations.