When an important calculation for a new controls solution was overlooked, the result threatened to keep a new aging tank for a brewery offline. Substituting solenoid valves with built-in power management brought the equipment online.

By Don Launder, Asco by Emerson

Not many Americans like warm beer — except, of course, process cooling engineers who work for breweries. They know that maintaining elevated temperatures within a metal tank in the brewhouse is critical throughout much of the fermentation process. Only at the proper time is coolant — often a mix of glycol and water — circulated by a programmable controller that opens and closes valves, directing flow through a tank jacket. The resulting temperature drop stops fermentation and readies the brew for the next step.

As cooling processes go, it is not particularly complicated. However, sometimes trouble can arise. This article will explore how selecting valves for an expansion project at a regional craft brewery raised issues that may interest engineers working in other process cooling applications.

With the ascension of craft beer in the past few decades, the beer business is booming. The industry’s success extends beyond the brewing behemoths that used to own almost all the beer aisles in the local liquor store to include a small but increasingly significant portion of the industry: the craft brewery. Companies in this segment — today perhaps 15 percent of the U.S. beer market — usually are defined as relatively small enterprises that are independently owned. Craft breweries typically use traditional ingredients and fermentation processes — though often with innovative twists.

One particular brewery in New England was an early entrant in the market for fresh, local craft beers. It recently found that rising consumer demand for its products required an expansion of its facility. The traditional manufacturing systems it had in place were well established. But to add more capacity — and make room for fresh, innovative products — the planners needed new equipment.

As chemists like to say, “Technically speaking, beer is a solution.” The vast majority of beers are made from a few ingredients — grain, hops and yeast — mixed into water. (Added flavorings such as pumpkin spice are optional or heretical, depending on your viewpoint.) An increasingly bewildering variety of beers combine these elements according to different recipes. The New England brewer routinely produces ales, stouts, India pale ales (IPAs), ciders, porters and lagers as well as occasional or seasonal offerings such as bocks or barleywines.

While beer variants incorporate specific changes based on the style being brewed, in general, a brewery follows a common set of brewing processes:

Tank temperature is an important variable in beer fermentation and storage. To control coolant flow to the insulating jackets of the uni-tanks used in the rest of the plant, brewery managers had standardized on two-way normally closed solenoid diaphragm valves, Model 8210 Series from Asco. These general-service valves provide long service life, low internal leakage, high flow and ultra-high reliability. Tied into a PLC running multiple tanks in the brewery’s plant automation system, the valves provided good results for years. 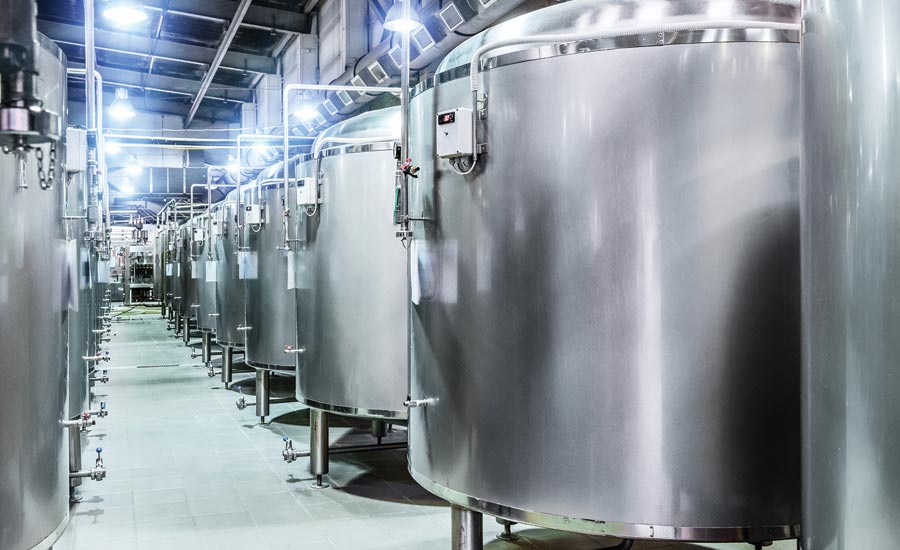 Only at the proper time is coolant — often a mix of glycol and water — circulated by a programmable controller that opens and closes valves, directing flow through a tank jacket. The resulting temperature drop stops fermentation and readies the brew for the next step.

When the New England brewer decided to expand, increasing fermentation and storage capacity by adding another uni-tank became a focal point of the process automation action. Like others in the brewery, the new tank would be an approximately 5,283-gallon (20,000-liter) stainless steel model. It would be located outside the plant with a coolant-supplied insulating jacket. The jacketing would maintain the optimum brewing temperature in the face of New England’s hot summers and extremely cold winters.

For the new tank, brewery managers specified the same two-way normally closed solenoid diaphragm valves used on its predecessors. However, the managers soon realized that the existing PLC lacked sufficient input/output capacity to control this additional equipment. Adding an entire new PLC would represent expensive overkill for automating a single tank. Instead, the team purchased and installed a smaller, considerably less costly micro-PLC.

As the project neared completion, timing was tight — especially given the issue of tank scheduling. In a thriving craft brewery that has grown large enough to produce multiple products, scheduling can demand as much skill as more traditional parts of the brewer’s art. Ongoing distributor deliveries, seasonal releases and fresh product introductions must be balanced with available tank capacity — and with the different timing needed to craft each variety of beer according to the complex biochemical requirements of its creation. For example, grain-to-glass duration may be only a few weeks for most ales but several months for most lagers.

In this case, by the time that the tank, micro-PLC and valves were installed, complex scheduling constraints meant that the new system had to be ready to begin fermenting its first batch in two weeks. If not, the brewery’s entire production schedule would suffer. 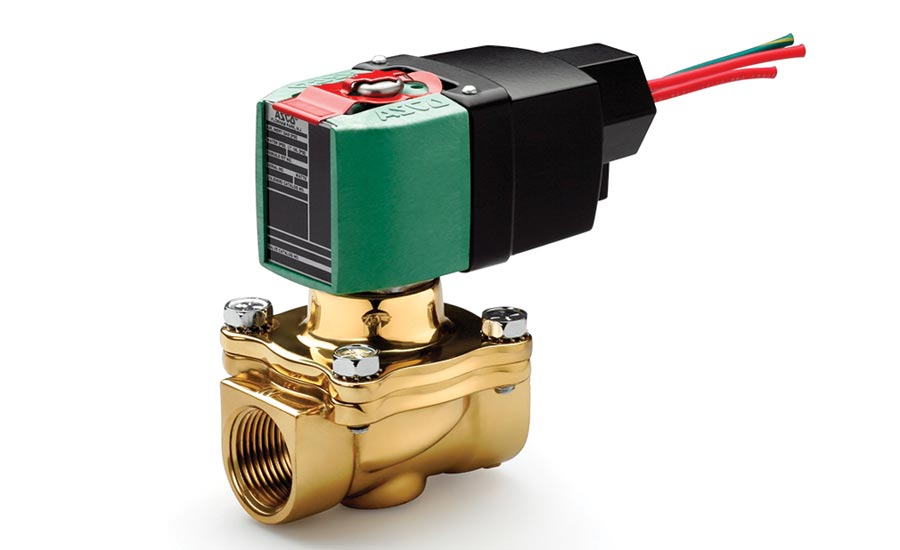 The Next Generation solenoid valves include built-in power-management technology and advanced electronics for voltage ranging. These features mean the valves can accept both AC and DC voltages without affecting performance.

At almost the last minute, trouble arose. When final testing commenced on the new tank, it was apparent that coolant would flow normally if only a single valve were energized. However, if more cooling was needed and the loop’s second and third valves were opened, the fuse on the system’s circuit would immediately be blown. Stressed, the project manager called the team at Asco responsible for valve solutions. Could they figure out the problem? Was some flaw in the valves causing the short circuits?

After a troubleshooting visit and investigation, the team determined that there was nothing wrong with the new tank’s valves. When tested one at a time, each of the three operated normally. Energizing all three of them simultaneously, however, tripped the circuit. A representative from the valve maker suggested the microPLC could be at the heart of the problem. Consulting the manual for the microPLC quickly revealed the problem.

Before purchasing the downsized controller, the brewery’s project manager had confirmed that it possessed the right complement of function blocks to perform the needed valve control. But the manager lacked the representative’s specialized familiarity with process automation, and calculating the amperage totals for any associated equipment had been overlooked.

Unfortunately, unlike the familiar standard PLC used for the main plant automation system, the micro version was rated for 20 W. Because each valve drew 17 W, operating more than one exceeded the controller’s maximum amperage rating.

Once the source of the circuit tripping was identified, the challenge was clear. How could the system be altered to get the tank up and running in less than two weeks? 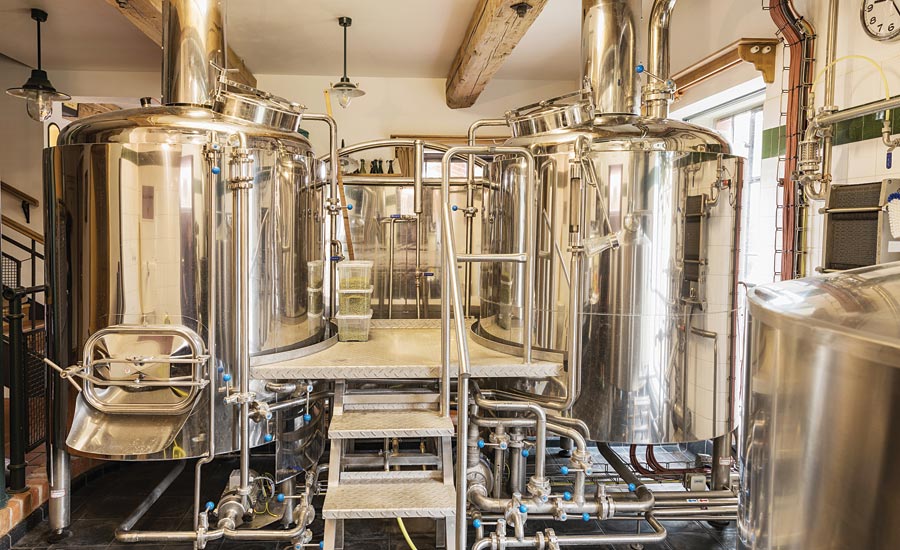 In processes such as those at a brewery, maintaining elevated temperatures within a metal tank in the brewhouse is critical throughout much of the fermentation process.

The project manager considered putting in a rush order for a full-fledged PLC to do the job. But again, that seemed like costly overkill for this relatively modest control task.

Fortunately, the valve-maker’s representative had a better idea. After a quick consultation and a look at product specifications — including a calculation of amperage totals — the project manager ordered three solenoid valves, Asco RedHat Next Generation.

But for the brewery, this valve selection meant something even more important. Instead of the 17 W draws required by the valves on their other tanks, the new valves only draw 2 W of AC power consumption each.

This low power rating allows users in many applications to reduce the size and cost of other system elements such as power supplies. By swapping out the valves, it ensured that the existing micro-PLC could handle the total amperage when the three valves controlled coolant flows on the new tank. This low power consumption even contributed to the facility’s overall “green” initiatives, reducing the brewery’s carbon footprint while helping to cut energy costs.

The valves were available via a quick-ship program. To meet the brewery’s tight timeline, the valves were delivered overnight. After quick installation and successful testing, the tank was up and running in time to accommodate the brewery’s expanded product schedule. From the first call about the issue to successful startup of the expanded system, the entire process took less than 10 days.

You might say that a small bottleneck almost tanked the project. Fortunately, the brewery had process automation expertise on tap.

Don Launder is a life science, food and beverage specialist with Emerson. He is based in Florham Park, N.J., and can be reached at 800-972-2726 or visit www.asco.com.