In its first year of business in 2012, Lakewood Brewing Co. produced just less than 3,000 barrels of craft beer. Now, only five years later and with rapid building and production expansion behind them, Lakewood is brewing more than 10,000 barrels per year. Management at this Texas brewery attributes the fast growth to their “do it right the first time” philosophy — combined with beers that offer a unique flavor.

Born in Belgium, Wim Bens graduated from the Southern Methodist University and the American Brewer’s Guild. Soon after, Lakewood Brewing’s president and founder decided to open a family-owned craft brewery where he could create his own distinctive blends. After a year and a half of planning, building and installing equipment, he opened Lakewood Brewing in a growing community in east Dallas.

In the planning stages, one important decision for the new brewery was to choose a cooling system for controlling the fermentation tank temperature and other parts of the process. “At that time, we looked around to see what everybody else was doing,” explains Billy Bettencourt, Lakewood Brewing’s facilities manager, who has been on board since the beginning. “Our primary goal for choosing a system was one that didn’t condensate. We also wanted it to be easy to install. From talking to people in the industry about their experiences, we quickly learned what we did — and didn’t — want to use. When someone was displeased with a product they had, we knew right off the bat we didn’t want to go that route!”

From their research, Lakewood found that some of the established breweries had installed the Cool-Fit ABS Plus system from GF Piping Systems. The corrosion-free preinsulated plastic piping system can handle water-based coolants from -58 to 104°F (-50 to 40°C) at an operating pressure of up to 10 bar within diameters of 0.75 to 12” (d25 to d315). The system’s core pipe is made of a proprietary ABS that is insulated with high density closed-cell polyurethane foam and protected with a watertight, UV-resistant black polyethylene jacket. The entire system is vaportight and shows no thermal bridges, which minimizes energy loss along the lines. Because of its properties, the piping is suited for beer production as well as food and beverage production environments. 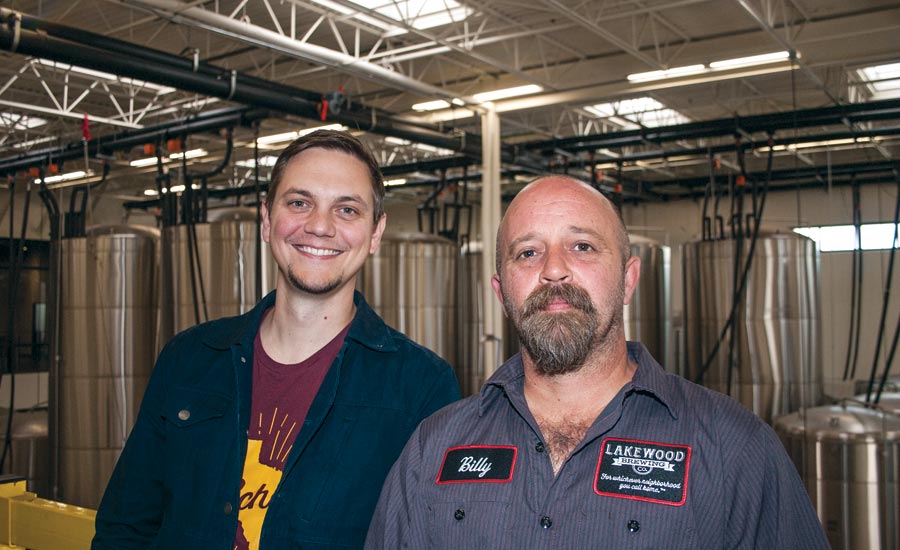 Lakewood Brewing Co.’s Wim Bens (left), its president and founder, and Bill Bettencourt (right), Lakewood’s facilities manager, attribute the brewery’s success to their “do it right the first time” way of thinking.

The piping system at the original Lakewood brewery was installed primarily by Bettencourt and other Lakewood personnel following training from GF Piping Systems’ Doug Winkler, an area sales manager. “It was very easy to learn,” recalls Bettencourt. “The training covered the proper way of pipe cementing, cutting out for add-ons.” The system was set up to convey chilled glycol through approximately 350’ of ~ 2.95” (75 mm) pipe with a dead-end-type circle-flow design.

A larger brewery facility was built two-and-a-half years later and the ABS piping system was expanded. The flow design is a “first in, last out” concept with a bypass from the end of the supply to the return.

“With this design, we’re able to chill every tank down to exactly where we need it as quickly as it can be done. From what I understand, no one else has had a better system design than what we have now. Since then, a lot of breweries are mimicking what we’re doing and how we’re operating,” says Bettencourt.

The expanded piping system in Lakewood’s new buildings includes about 1,000’ of pipe. This consists of 170’ of 6” pipe for the main line that comes out from the chiller. From there, it runs through the middle of the building, teeing off and stepping down periodically to five 150’ lines with 3” diameters that run down to the actuators. Each turn goes to the end of the building and comes back to the main header, keeping the first in, last out design concept. Once past the actuators, the piping system switches to a 1” flexible pipe that connects to each tank.

The piping system conveys food-grade glycol at 26°F (-3°C). It is used on the fermenting vessels and the bright tanks where the beer is produced as well as at the cold water tank. Lakewood currently has 25 tanks, 10 of which are 180 BBL tanks. Most of the remaining are 90 BBL tanks.

Bettencourt says that all that is needed for maintaining the preinsulated piping system is a quick monthly check. “There’s a lot of vibration going on in the buildings, so we do go through the tanks to make sure the threaded connections to the tanks keep snug and tight,” he explains. “There is some maintenance, but very little.” 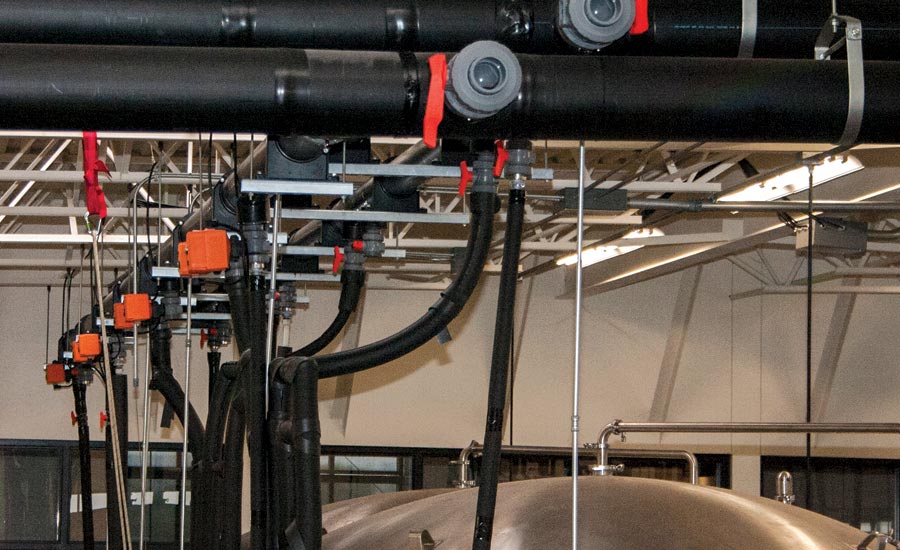 Lakewood Brewing installed preinsulated plastic piping and fittings for cooling the beer production process in 2012. The system was later expanded to meet the brewery’s exponential growth. Today, the system conveys cold glycol at temperatures of 26°F to supply and maintain fermentation and bright tanks temperatures at about 34°F.

Startup Success Starts with a Plan

Because Lakewood Brewing is one of the largest independently owned brewery in Dallas, other brewery startups turn to them for ideas. Bettencourt has some specific advice for them, most of which fall under the advice of “do it right the first time.” 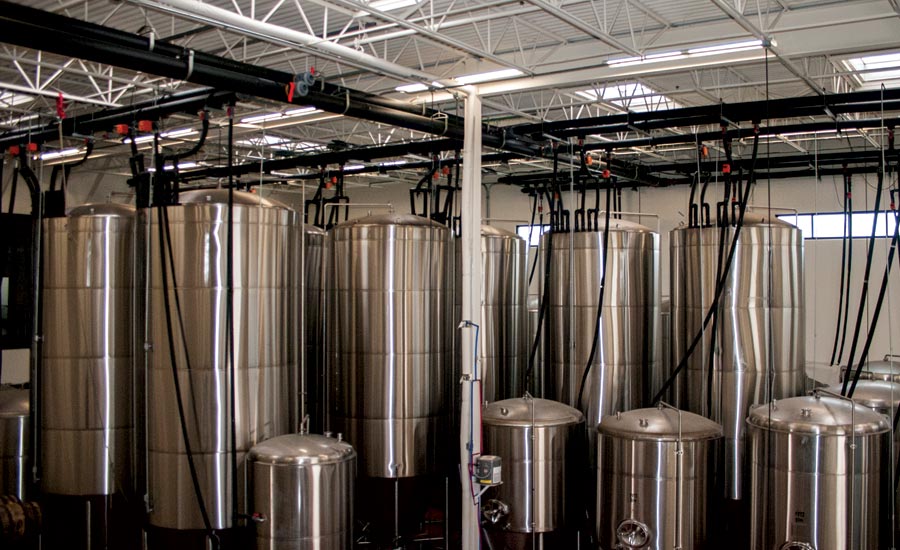 From the main 6” pipe coming from the chiller, the pipe drops to smaller 3” lines. The cooling system conveys food-grade glycol at 26°F to the fermenting vessels, bright tanks and cold water tank.

“Rather than skimping here and there to save immediate expenses, do it right the first time even if it requires a larger outlay initially. That type of thinking pays off in the long run. Typically when you buy a pipe-cooling product, you have to pay to have it wrapped. By buying cheaper pipe, but then paying to have it wrapped, you end up paying more. It’s more cost-effective in the long run to go with the Cool-Fit preinsulated pipe,” he said.

With Lakewood’s expansion, the property now encompasses four different buildings. The original brewery is attached to the new buildings and still houses canning, bottling, kegging, the brewhouse and the original taproom. The newer part of the property includes a taproom that accommodates 300 people and a beer garden complete with a stage and picnic tables that seat 160 people. 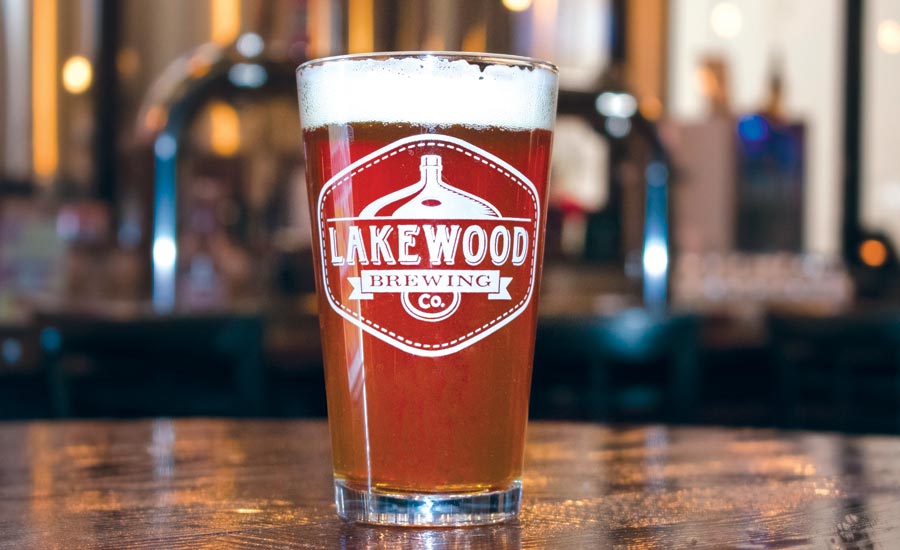 Because Lakewood Brewing has almost doubled every year since it has been in business, brewery management is now taking a step back to re-evaluate the rapid growth before deciding on any more giant leaps. The evaluation will include questions like: What can we do to become more efficient? What can we do to make our employees’ jobs easier? What can we do to make even better beer for consumers? Again, doing it right the first time will undoubtedly pay off for this smart-thinking craft brewery.