As part of a development project for a large gas block off the Malaysian coast, the package had to be safe, light in weight and employ proven technology.

Following an order in 2016, a 1,030 bbl/d bespoke produced-water treatment package was delivered to an integrated oil-and-gas services company in Malaysia. The package was supplied as part of a development project for a sizeable gas block located approximately 50 miles (80 km) off the Malaysian coast.

The oil-and-gas services company required a final package that was inherently safe and employed proven technology while offering low weight and expedient delivery. The package selected made use of design configurations of oil-water separation technologies to provide a solution that met — and exceeded — the oil-and-gas services company’s stringent specifications (figure 1).

The package receives 4 ft3/min (6.8 m3/hr) of produced water from the upstream production separator at a pressure of 117 barg with a maximum inlet oil in water concentration of 3,000 ppm. The process consists of three stages of oil-water separation. The first stage consists of de-oiling hydrocyclones for bulk oil removal. The second and third compact flotation unit (CFU) stages are for further polishing. The CFUs make use of dissolved gas present in the influent water for flotation of oil droplets. Degassed and de-oiled produced water then is passed to overboard, with a daily average oil concentration of no more than 20 ppm.

Due to the high operating pressure and hazardous nature of the process fluid, the package was designed with safety as the foremost consideration. The oil-and-gas services company’s operational staff underwent training in the operation of the package, carried out by specialist engineers from the equipment supplier.

De-Oiling Hydrocyclone. Hydrocyclones are enhanced gravity-separation devices that exploit the immiscibility of oil and water and the difference in density between the two liquid phases. According to Stokes’ Law, the settling rate of a particle (or droplet) in a continuous liquid phase is directly proportional to the gravitational acceleration. A hydrocyclone effectively increases the gravitational acceleration on the droplet (up to 2,000 times) by inducing a centrifugal force. The hydrocyclone consists of no moving parts and instead relies on the liner geometry to induce swirl and induce the centrifugal force for the removal of oil droplets from the continuous water phase.

Figure 2 outlines the principle of operation of the hydrocyclone. Influent liquid enters through a tangential inlet. The liquid then passes down the liner, which tapers towards the bottom. The swirl induced by the tangential inlet and the liner geometry forces lighter oil droplets to the center and heavier water to the outside. Liner geometry is optimized to induce swirl and allow the formation of a stable oily core in the center. Oily reject passes out through the top of the liner through a reject orifice while cleaned water passes out through the bottom.

De-oiling hydrocyclones are a desirable technology where there is high inlet pressure available because the differential pressure across the hydrocyclone liner provides the driving force for separation. The small size of the hydrocyclone liners helps to reduce the overall dimensions of the package. Additionally, the low liquid holdup volume in the liners leads to a low operating weight. These factors make the de-oiling hydrocyclone especially suitable for applications involving removal of oil from produced water downstream of a production separator on offshore facilities. 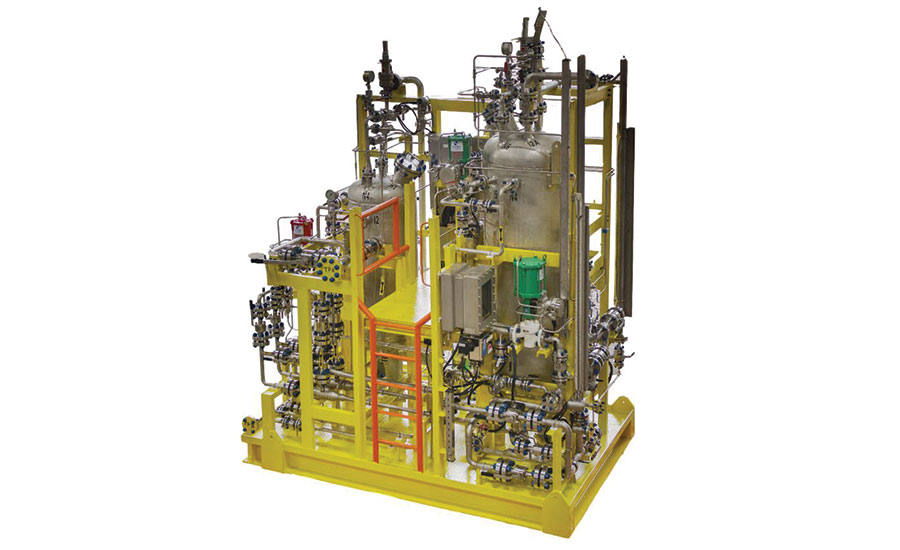 Compact Flotation Units (CFUs). CFUs also are a well-established technology for offshore produced-water treatment. CFUs deliver the performance of a conventional induced-gas flotation (IGF) unit but with significant savings in weight and footprint.

The proprietary configuration of the CFUs included in the package for the oil-and-gas services company combine flotation with cyclonic separation. The CFUs were designed to make use of dissolved gas present in the produced water for flotation, thereby eliminating the need for injection of fuel gas.

Influent water enters the CFU via twin tangential inlets, which induces a swirl within the vessel. The bubble shear distribution plate ensures a homogenous distribution of gas bubbles. Gas bubbles attach to oil droplets and increase the rise rate to the liquid surface. Due to the swirl induced in the vessel, the lighter oil and gas mixture gravitates to the center and is collected from the surface. The heavier water passes outward over the baffles (figure 3) and is collected as clean water. 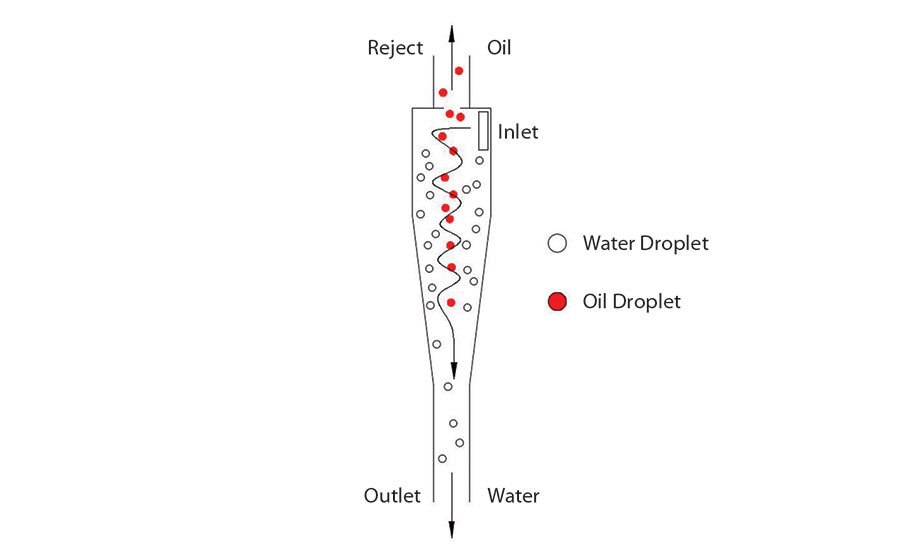 FIGURE 2. This figure outlines the principle of operation of the hydrocyclone. The liner induces a swirl that helps separate the oil and water before the separated streams are expelled.

Oil-in-Water Analyzer. Continuous inline measurement of the outlet oil-in-water concentration is achieved via a dedicated oil-in-water analyzer. This instrument uses the principle of laser-induced fluorescence (LIF) to precisely measure the concentration of free oil in situ. The analyzer probe also incorporates ultrasonic self-cleaning facilities, which result in minimal operator intervention and reliable performance. 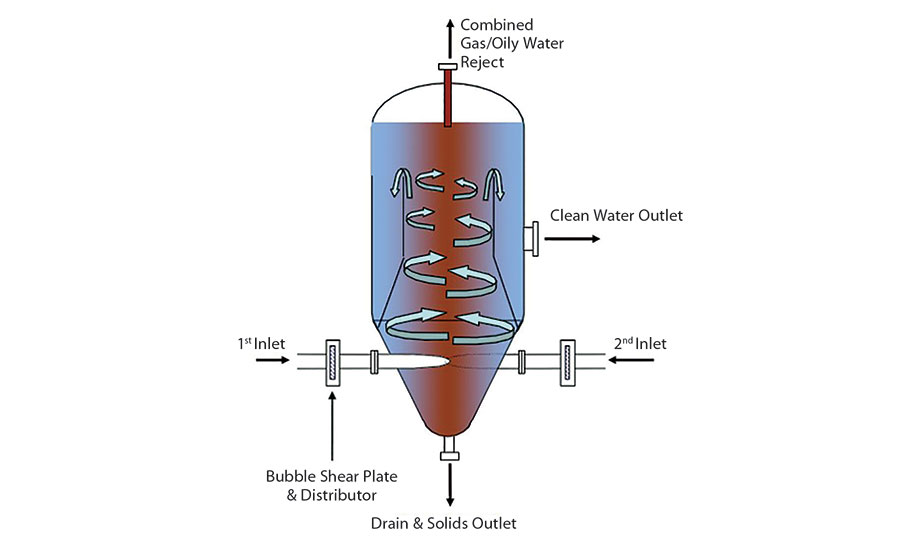 FIGURE 3. Compact flotation units (CFUs) also are a well-established technology for offshore produced-water treatment. The proprietary configuration of the CFUs used for the oil-and-gas services project combine flotation with cyclonic separation. The CFUs were designed to make use of the dissolved gas present in the produced water for flotation, thereby eliminating the need for injection of fuel gas.

Figure 4 shows the analyzer on the skid. The combined ultrasonic/optical sensor for the instrument is built into the analyzer probe. The probe is coupled to the analyzer enclosure via an umbilical cable.

Optimization of Layout and Delivery

The layout design for this package was centered around the two large CFU vessels and the access platform that was required in accordance with human factor engineering requirements. By taking a holistic view of the remainder of the skid, it was viewed that all remaining access could be conducted from the skid edge, using equipment elevations to minimize the footprint. This then defined the initial piping routes.

There also was space dedicated purely to account for as-yet unknowns and changes during detail design such as design alterations, equipment changes and additional minor equipment (extraction routes, cable bending radii, impulse supports, steel bracing, etc.). Accurately assessing this unknown factor at the beginning requires skill and experience, and it is the key to providing an optimized layout. 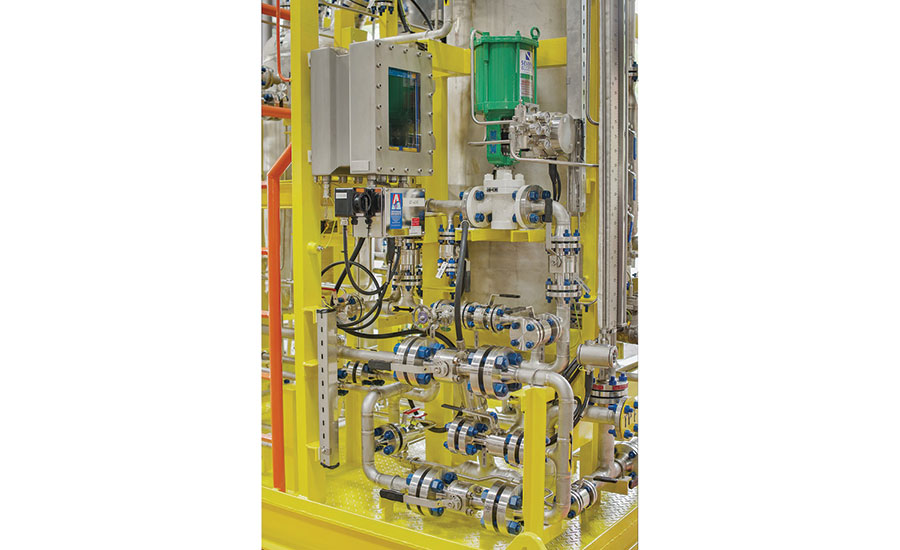 FIGURE 4. The dedicated oil-in-water analyzer is installed on the skid. The combined ultrasonic/optical sensor for the instrument is built into the analyzer probe. The probe is coupled to the analyzer enclosure via an umbilical cable.

It is essential that the size and weight of any module to be placed on an offshore platform does not exceed the limits set by the oil-and-gas services company and the end user. The module already was at a critical weight limit and the oil-and-gas services company stipulated a stringent weight limit of approximately 20,944 lb (9,500 kg). Through optimized equipment selection, process design, piping and layout, the water-separation and treatment system supplier was able to build a package with an operating weight of 14,847 lb (6,747 kg) — 30 percent less than the specified weight limit.

The package layout was optimized to give a highly compact solution that complied with the oil-and-gas services company’s health, safety and environment requirements. The end user specified strict dimensional limits of approximately 11.5 by 9.85 by 16.4 feet (3,500 by 3,000 by 5,000 mm). The package delivered had a footprint only 50 percent of that stipulated by the end user.

For this offshore produced-water treatment packages, there was a somewhat tight delivery schedule of 40 weeks to be met. Use of a local fabricator familiar with the in-country standards and practices required for a project of this nature helped to reduce delays by ensuring that these were met the first time. Many of the individual short-lead equipment items such as hydrocyclones, valves and instruments were supplied in the United Kingdom and shipped to the fabricator’s yard in Malaysia for incorporation onto the skid. Through careful scheduling and project management, it was ensured that each equipment item was ordered and arrived on time so as not to cause an overall delay to skid fabrication. Through these methods, package delivery to the oil-and-gas company’s yard was completed earlier than scheduled.

The package was designed for 10:1 turndown as specified by the oil-and-gas company. As the flow is decreased, however, there is a corresponding decrease in performance to be expected. Hydrocyclones perform better when there is a greater differential pressure from inlet to outlet because this increases the driving force for separation. By decreasing the flow, an increase outlet oil concentration is expected. 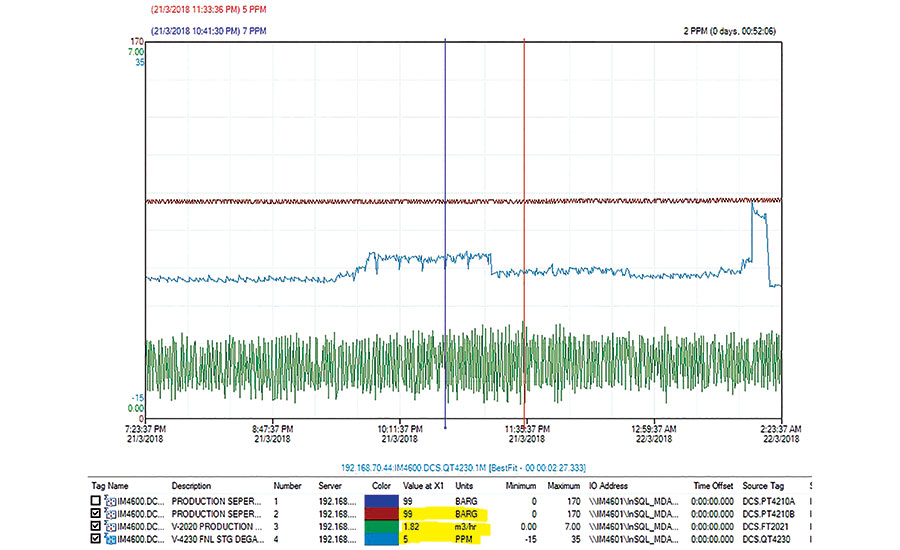 FIGURE 5. This excerpt of operation data demonstrates that even at reduced flow conditions, the produced-water treatment system is able to exceed the required performance.

At the time of writing, the package is at the pre-commissioning phase. Operational staff from the oil-and-gas company have provided feedback regarding the initial running of the package. While operating the package at a flow rate of 200 bbl/d (~20 percent of design flow), the measured oil concentration at the package outlet varied from 2 to 10 ppm over the course of a seven-hour operational period. The data trend for this operation period is shown in figure 5, where the blue line represents the outlet oil concentration. This demonstrates that, even at reduced flow conditions, the process is able to meet and exceed the required performance.

In conclusion, the package was delivered ahead of schedule. The process solution encompassed established technology and was designed to be inherently safe. Equipment selection and optimization of layout led to a significantly reduced weight and footprint, allowing stringent requirements to be met. Data gathered from the initial operation of the package shows that it is able to meet the specified performance.