One chiller manufacturer performed head-to-head comparisons under real-world conditions to determine the differences in efficiencies among fixed-speed, digital-scroll and variable-speed compressors.

For decades, plastics processors have had to select chillers based on their maximum cooling-capacity requirements. While this approach ensures plenty of chiller capacity, it was not always energy efficient. That is because typical chillers are equipped with fixed-speed compressors (fixed-speed motors and compressor scrolls) that operate at maximum speed and capacity regardless of the load. To avoid excessive cooling on less-than-full-capacity loads, most chillers utilize a hot-gas bypass to introduce an additional, artificial cooling load. As a result, power consumption with these chillers remains fixed at a high level, regardless of actual process cooling requirements.

Chillers with digital-scroll compressors also utilize fixed-speed motors; however, they can modulate chilling capacity with the help of digital controls. First, the controls sense chilling demand from the load, then they modulate capacity by time-averaging the engagement of the compressor scrolls with the motor until the demand is met. When chilling capacity is not needed, the scrolls are disengaged: Cooling capacity is unloaded, motor load is reduced and power consumption savings are realized.

Though digital-scroll technology was the first to enable variable-capacity chillers without the need for a hot-gas bypass, its success in producing energy savings has been limited. Energy consumption relative to chiller output remains relatively high for most partial loads. 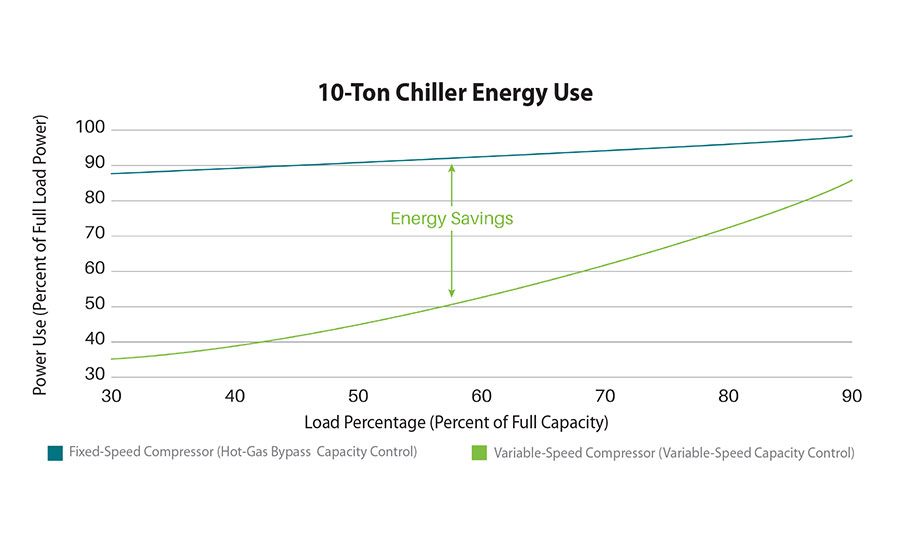 FIGURE 1. When operating with a 40 percent load, the 10-ton variable-speed compressor consumes 39 percent of full-load power.

The ability to combine power savings with the ability to handle low, partial and full loads are the reasons why one chiller manufacturer chose variable-speed compressor technology for its water- and air-cooled 10-ton and 20-ton portable chillers. In tests against 10- and 20-ton chillers equipped with fixed-speed compressors, variable-speed chillers provide energy savings in a range of realistic conditions. 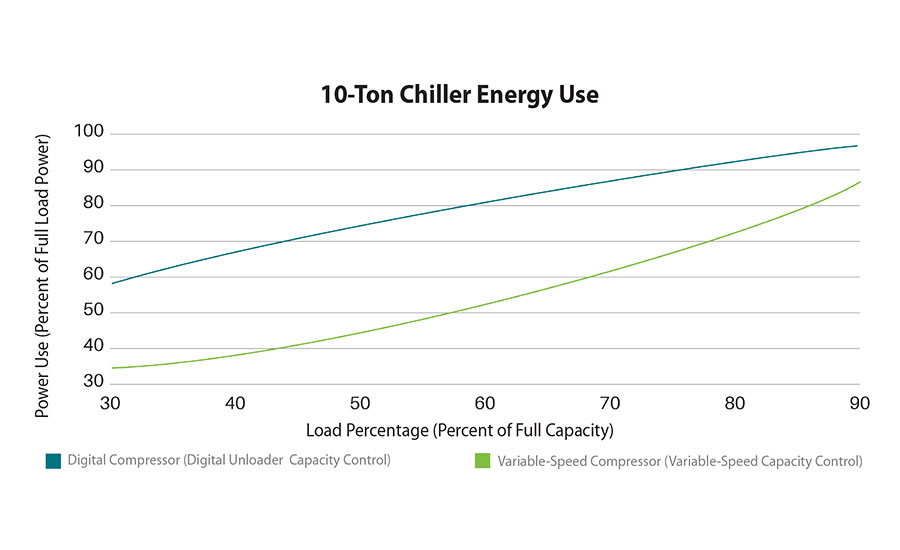 One chiller manufacturer performed three head-to-head comparisons under real-world conditions to determine the differences in compressor efficiencies. For the tests, fixed-speed, digital-scroll and variable-speed compressors were installed on otherwise identical chillers with identical loads. Here are the results of these tests.

Figure 1 shows that, when operating with a 40 percent load, the 10-ton variable-speed compressor consumes 39 percent of full-load power. At the same load, the fixed-speed chiller consumes 89 percent of full-load power. The variable-speed compressors provides energy savings, and the level of efficiency can continue proportionally throughout the capacity range. 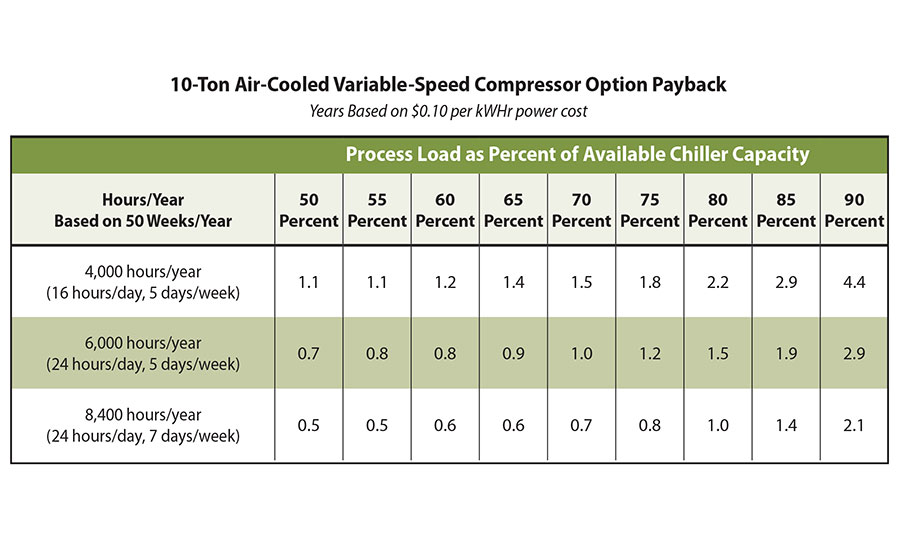 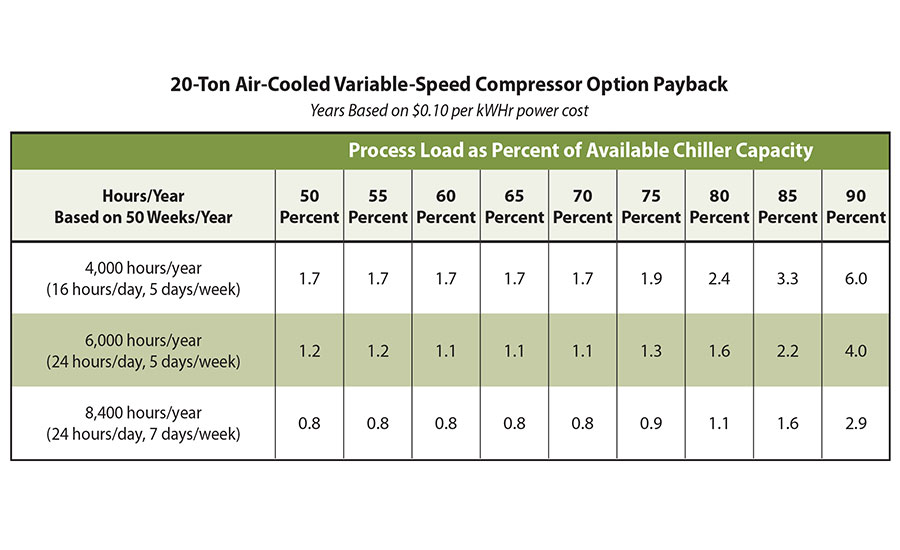 Note that the spikes in power consumption from 45 to 50 percent of capacity occur for both chillers as they activate their second compressor to handle loads that exceed 10 tons. However, as soon as its second, fixed-speed compressor comes on line, the variable-speed chiller again self-adjusts its output to minimize power consumption and maximize total power savings. In the load range between 50 and 70 percent, the variable-speed chiller uses 20 percent less power than the fixed-speed unit. Thus, the 20-ton variable-speed portable chiller provides power savings at partial loads from 3 to 8 tons and 11 to 16 tons. 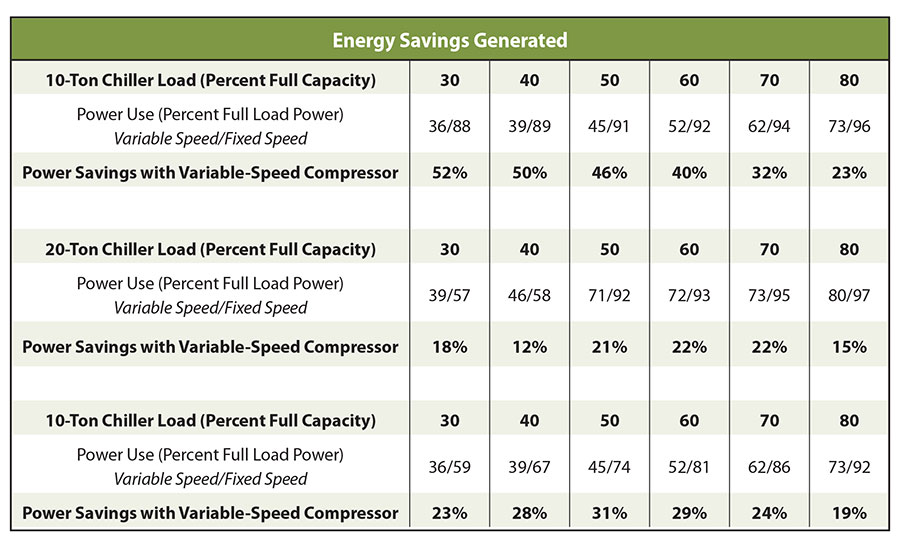 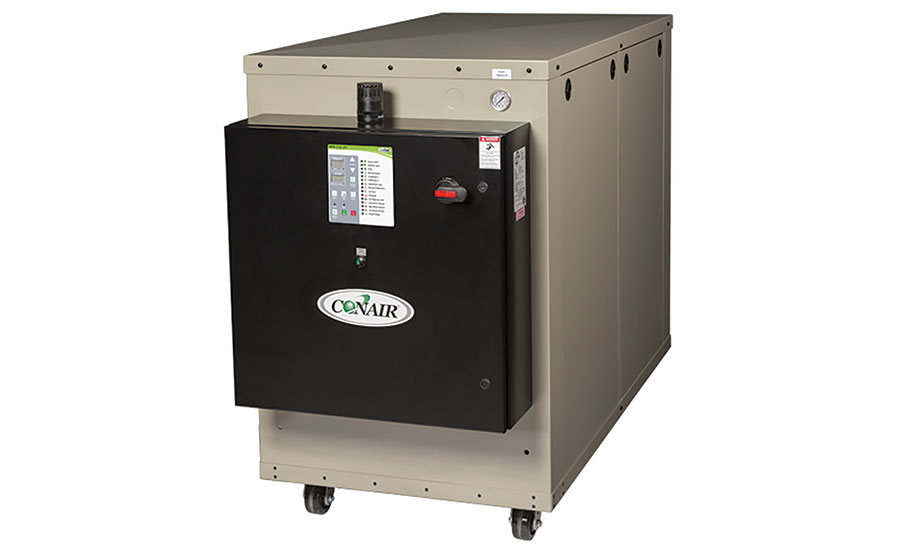 These and other benefits of variable-speed compressor technology also mean rapid payback on your investment, particularly for those with a higher proportion of low load and partial-load chilling requirements, where cost savings are greatest and payback occurs most quickly. Many processors can expect payback on a variable-speed chiller in one year or less.