Oven end-users often struggle with equipment that no longer meets their current production or process needs. “Should we replace our existing equipment with a new oven or repair, retrofit or rebuild the existing equipment?” is a familiar refrain. The decision requires consideration of cost and downtime implications, both of which affect the capital expenditures budget and bottom line. Case studies of real-life projects can help compare the alternatives — repair, retrofit or replace.

A closer look at the reasons for poor oven performance will help processors understand what to look for. Following that review, this article will review three case histories to demonstrate how other processors updated poorly performing ovens for renewed life.

Examples of catastrophic damage include fire and explosion. When this type of damage occurs, nearly everyone notices, including employees, facility neighbors, the local fire department, the insurance company, OSHA, etc. Even if less severe, the processor often cannot use the oven until a full investigation is completed by the authorities having jurisdiction. And, most of the time, the equipment will have to be repaired or rebuilt before it is returned to service.

Non-catastrophic damage includes abuse that does not put an oven out of commission. Examples are damage during loading or unloading, or a collision with a forklift truck. Ovens typically are made out of sheet metal. Inattentiveness during loading can result in baskets crashing into ductwork or parts jamming on a conveyor belt. General inattentiveness around the oven can lead to someone poking through the oven wall with the tines of forklift. (For a variety of reasons, this type of incident seems only to happen on second or third shift.) Depending on the extent of the physical damage, fixing the oven would be considered a repair or a rebuild.

Everything has a life cycle. For an industrial oven, the expected useful life is 20 to 30 years, assuming some minimal amount of maintenance has been performed. It is not surprising to hear, “Worked fine for the last 35 years. I don’t know why we are having problems now.”

But, there are also longer-term issues seen with older equipment. Metal fatigue (caused by long-term vibration) and insulation degradation can be seen at the end of the life of an oven. If the top of an oven side wall is significantly hotter to the touch than the bottom, it is a good indication that the insulation binders no longer function, and the insulation is settling.

Industrial ovens also are rebuilt to bring them into compliance with current standards and safety codes. Existing equipment is grandfathered in (exempt from being required to meet new regulations) — as long as it meets the safety standards that were in force when the equipment was built. Insurance companies, however, will caution processors that even if old equipment is grandfathered in as it relates to compliance issues, manufacturing companies should maintain a uniform standard of care among all of its industrial facilities. In other words, if a processor repairs one oven and it meets current standards and safety codes, the processor should strongly consider a program of repairing the ovens in its other facilities to avoid liability issues. The standard of care issue becomes more acute when manufacturers’ have more than one facility, where the actions of management in one facility may be unknown by the management team at the other facilities.

Work of this sort performed on an old oven would be considered a repair or rebuild.

Industrial ovens are moved for many reasons. Examples include optimizing a plant layout, a building expansion, or adhering to lean manufacturing principles or specific Kaizen events such as reducing work-in-process inventory. Equipment relocation often prompts an opportunity to give the equipment a facelift and address the small issues that have accumulated over time. Depending on the length of the to-do list, work done in association with relocation would be considered a repair or a rebuild.

Products and product lines can evolve over time. Expanded product offerings can be larger than originally contemplated. When the mass of the parts increases, those parts may need to remain in the oven for a longer period of time to achieve the same process time. In order to maintain the same product rate with larger parts, you may need a longer, wider or higher oven. It also is possible the oven may need larger burners or additional fan capacity. This type of modification would be considered a retrofit. 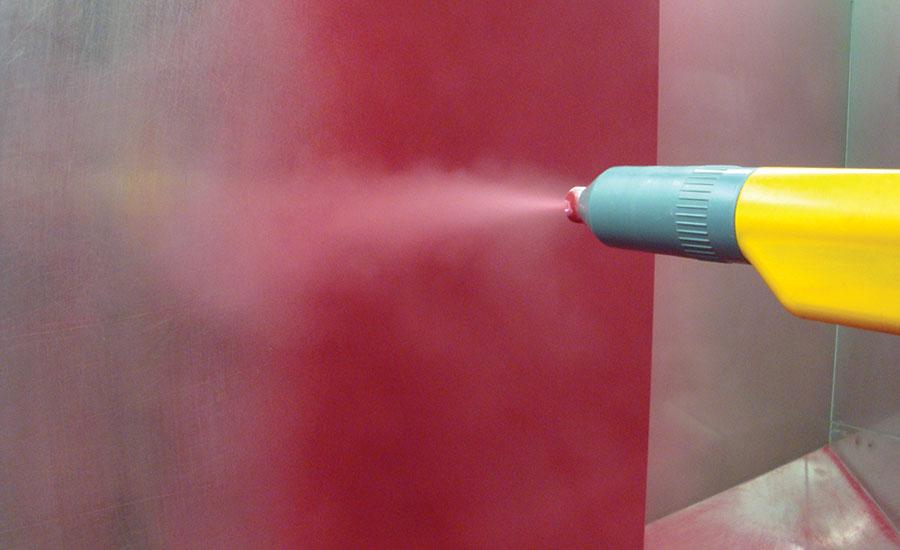 Like products, the process may evolve and change. These changes can be internally or externally driven. Perhaps there is a coating that performs better that needs a longer cure cycle. Perhaps related processes were always marginal, and now rejects are manifesting themselves in the oven. Perhaps the customer’s specifications have been modified to require better temperature uniformity or longer dwell times. Maybe the time has come to incorporate some factory automation, and batch processes need to conveyorized or loading/unloading needs to be automated. Perhaps new statistical process controls are being implemented, and you need to add data acquisition. This type of upgrade would be considered a retrofit.

Production rates increase over time. When customer demand goes up, management needs to increase throughput. When customer demand goes down, management wants to improve the efficiency of existing equipment by cutting back on personnel or the number of shifts. An analysis of cyclical and seasonal demands may draw attention to the production equipment. 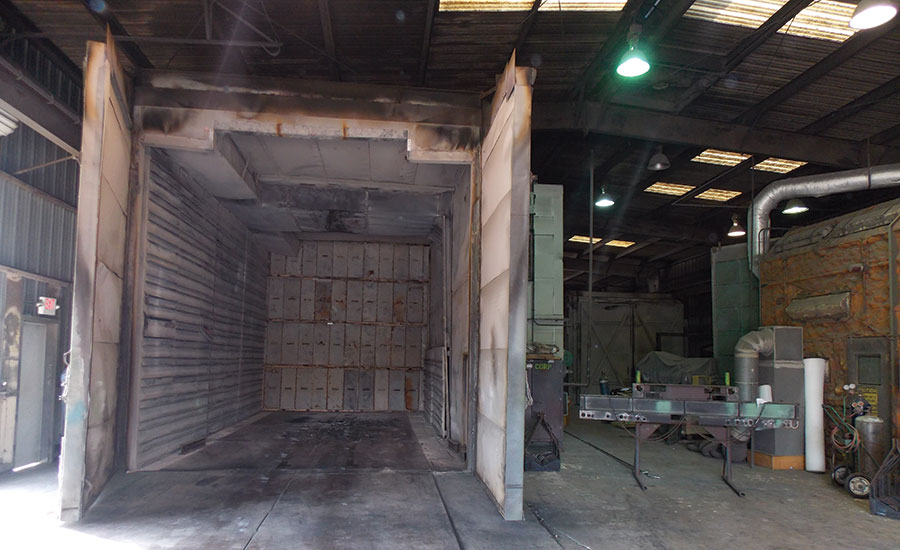 The initial inspection of the oven at the job shop coater revealed sagging ductwork and wall panels deteriorated beyond use.

The same is true when it comes time to look at overall cost and productivity. The competition can drive you to improve efficiency. Having to bid against other business units within your organization when it comes time to add or move product lines also can drive efficiency improvements. Increased production and throughput can influence size, conveyor speeds, material handling, etc. This type of upgrade would be considered a retrofit.

Never Really Worked from the Start

Industrial ovens are designed to be used every day and should last for decades (with preventive maintenance). Occasionally, processors have equipment that has been in place for years, but it is rarely or never used. When asked about it, the reply is too often: “That equipment never really worked since day one.” These are usually inherited problems. There are several possible reasons:

With industrial ovens, as with many things, you usually get what you pay for. If someone in your organization was trying to save money, do something on the cheap or did not know what they were doing, you may have to live with those decisions for years. This oven issue is resolved by a retrofit or a complete replacement.

The following case studies are three recent real-world examples where a repair, rebuild or retrofit saved significant time or money on an oven project. Each case resulted in a high performance industrial oven with years of additional useful life.

In this application, a high performance coating job shop provided a range of services such as PTFE, thermal spray and powder coating. The oven, which was originally purchased for a facility in Michigan in 1989, was moved to Texas around 2008. Once at the new plant, the oven was modified by a local contractor with changes to ductwork. 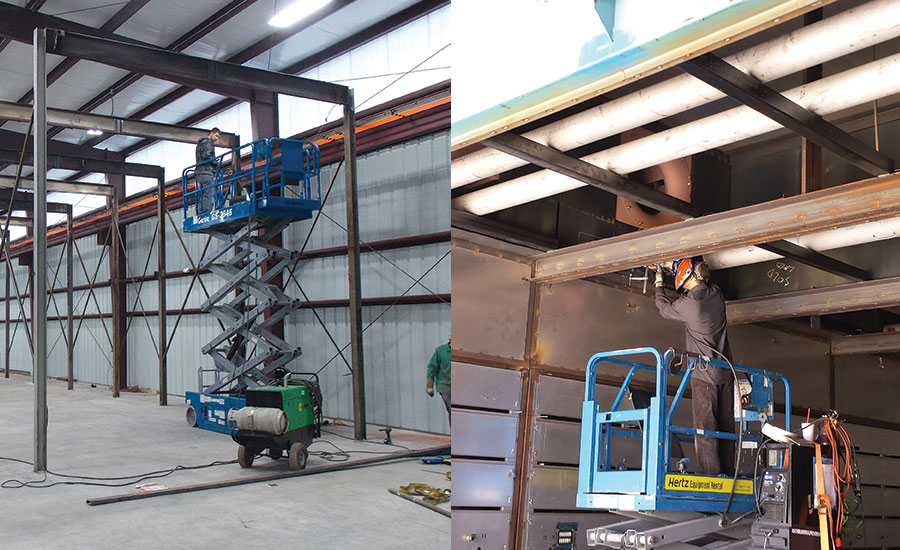 The manufacturer of aerospace vehicles needed an oven large enough to hold fuselage or wing sections. The oven was used for composite curing of vacuum-bagged sections and components.

Approximately 10 years later, the finishing company wanted to move the oven again to a location two miles away. Problems were encountered when dismantling started.

As noted, the supply duct had been modified from the original. Both sides of the ducts had slots, and the ductwork was sagging and ready to fall down. In addition, the wall panels were deteriorated beyond use, and the oven had cold spots where the temperature dropped 150°F just inside each door. 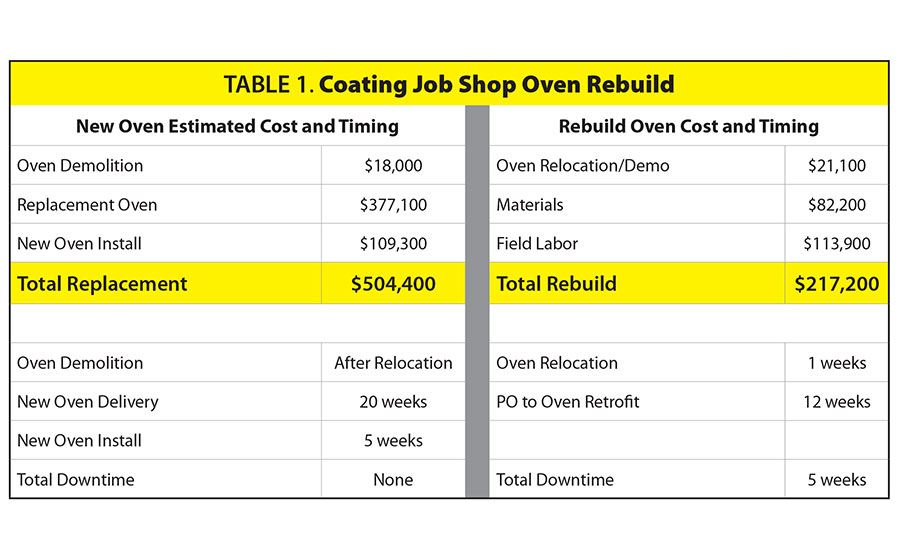 To meet the oven design specifications needed at the new plant, the oven was modified and upgraded. Oven modifications included:

Table 1 compares the cost of the oven rebuild vs. the cost of a new oven. The rebuild saved $287,000 and eight weeks. The processor did not have use of the oven for five weeks because they elected to move the salvageable parts and demolish the rest.

In this application, a manufacturer of aerospace vehicles required a rebuild and retrofit on a large oven capable of holding fuselage or wing sections. Purchased used in 2013, the oven was used for composite curing of vacuum-bagged sections and components. The required process time varied based on part size, and the maximum temperature was 392°F (200°C).

To meet the oven design specifications needed for the composite curing operations, the oven was modified and upgraded. Oven modifications included:

As a result of the rebuild, the oven now provides temperature uniformity measured at ±3°F (±1.7°C) throughout the oven. 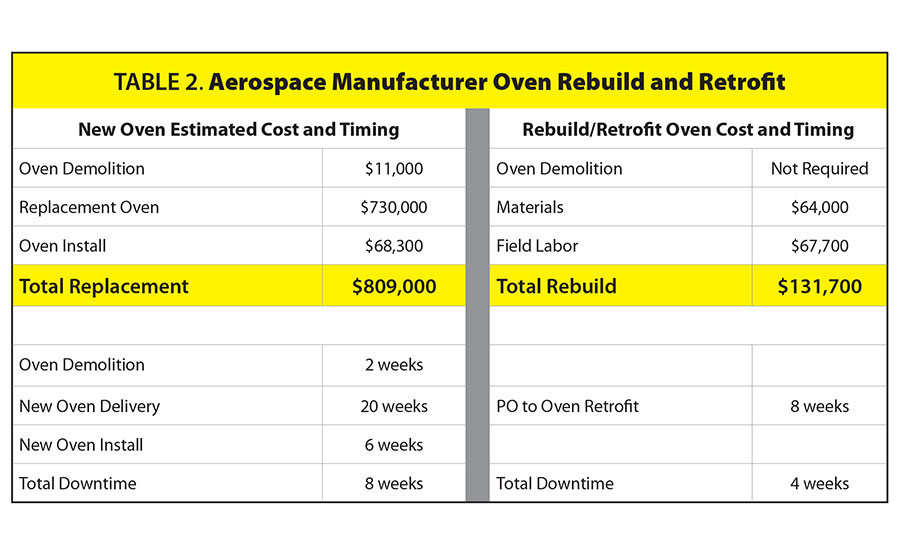 In this application, a manufacturer of capacitor vertical transformers (CVT) needed to retrofit an oven first built in 2008 to meet the design conditions of a two-part heating process.

With CVTs, the capacitor stack works as a voltage divider. Individual capacitors are separated by dielectric spacers made from plastic film and paper. Oil is added as a thermal insulator. The two-part heating process involved both moisture removal (vacuum) and oil impregnation. The required process time was seven days with a maximum temperature of 300°F (150°C).

Table 3 compares the cost of the oven retrofit vs. the cost of a new oven. As a result of the retrofit, the temperature uniformity is ±5°F (3°C). The reject rate was reduced from 58 percent to 3 percent, and the total cycle time was reduced from 7 to 3 days. In total, the retrofit saved $126,000 and 12 weeks. The transformer manufacturer continued to use the old oven for five additional weeks. Pleased with the results, the CVT manufacturer commissioned retrofits on four more ovens. 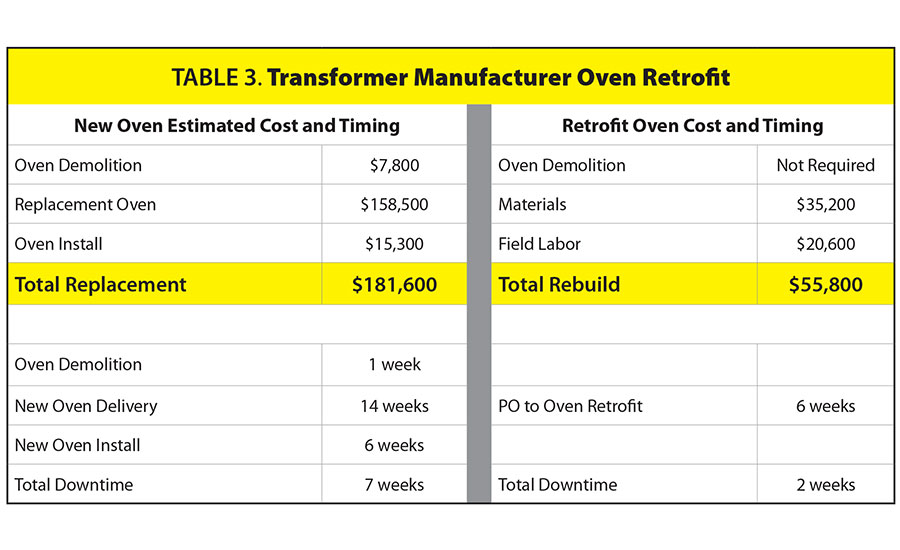 In conclusion, the benefits of exploring the repair, rebuild or retrofit of an existing industrial oven include reduced capital cost and a shorter schedule. Processors need to pay for the parts that are replaced, and they can save significant cost on demolition, rigging and transportation. In addition, the modified oven will offer better performance and operating efficiency. 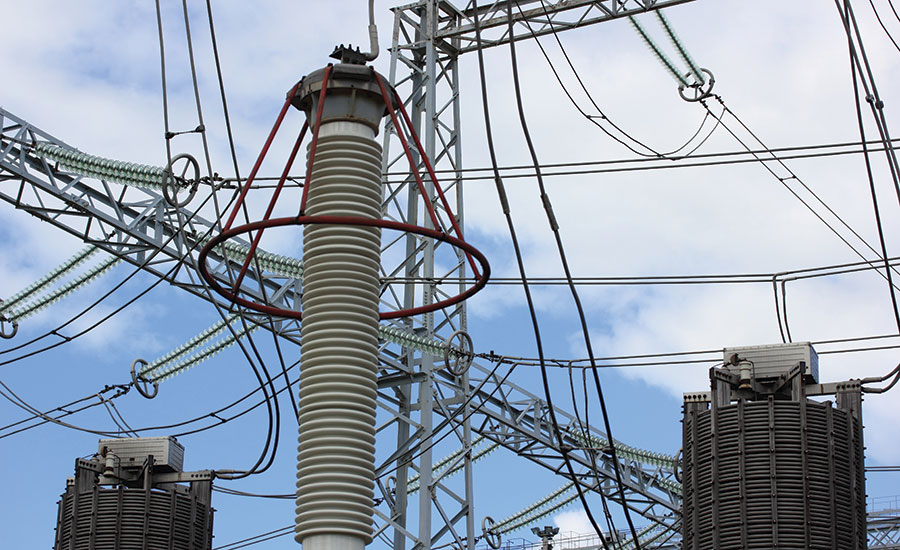 With CVTs, the capacitor stack works as a voltage divider. Individual capacitors are separated by dielectric spacers made from plastic film and paper. Oil is added as a thermal insulator. 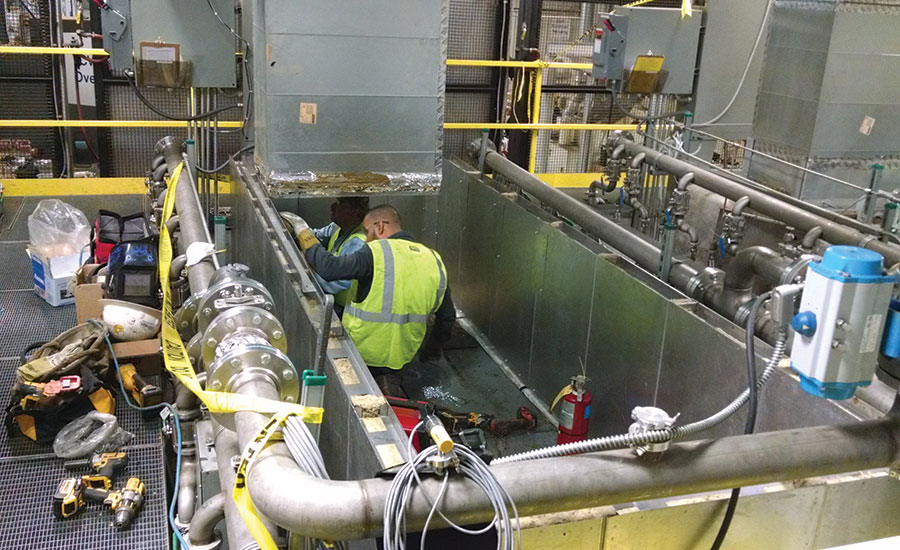 A retrofit for a manufacturer of CVTs allowed the company to reduce its reject rate from 58 percent to 3 percent.