Industrial wireless networks’ aggressive growth rate is fueled by the maturity of open wireless communications protocols, including Wireless HART and ISA-100.11a. Their presence in industrial facilities has become increasingly common. Likewise, with a growing user base, there is an ever-increasing demand for enhanced connectivity.

First, many installations use self-regulating heat trace cable. As its name suggests, self-regulating heat tracing automatically regulates output power as process temperatures fluctuate. This helps stabilize the system and prevents it from overheating. The large mass of pipe and fluid versus the relatively low output of the heat trace system (typically less than 60 watts per meter), results in increased thermal stability. Thermal stability is further enhanced by piping insulation.

The resulting change in temperature is slow enough that wireless updates of the pipe temperature to the control system can take place over a longer time period than other process control applications. Depending on the process and the size of the pipe, the proportional-integral-derivative (PID) temperature control algorithm may only need to run once every one to five minutes without process upset, at which time the power output to the cable may be adjusted. 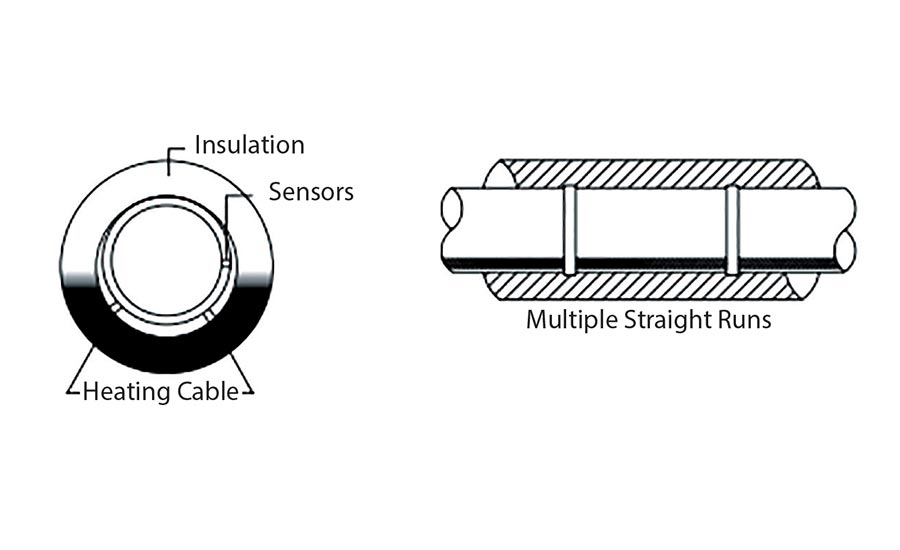 In addition to the preferential use of industrial wireless sensor networks for control of noncritical heat trace systems, they provide added value to wired systems when used for process monitoring and diagnostics. For instance, in 2010, one wireless controls provider published a white paper on the success of using wireless temperature transmitters to monitor critical process lines that transport bitumen.[1] In this application, wired sensors were utilized for process control alongside wireless sensors for predictive maintenance systems. Critical process lines were held to tight tolerances while the wireless sensors increased the systems’ ability to identify potential problem spots early.

2. They Work in Conjunction with Existing Field Sensors

Some heat trace control and monitoring systems incorporate industrial wireless gateways, allowing for wireless communication through a mesh network of temperature sensors on pipes and tanks. The design allows such systems to work in conjunction with existing field sensors that operate on the plant-wide wireless network. It also allows for a hybrid approach in which wired and wireless sensors are mapped to independent output loops of the heat trace control system. 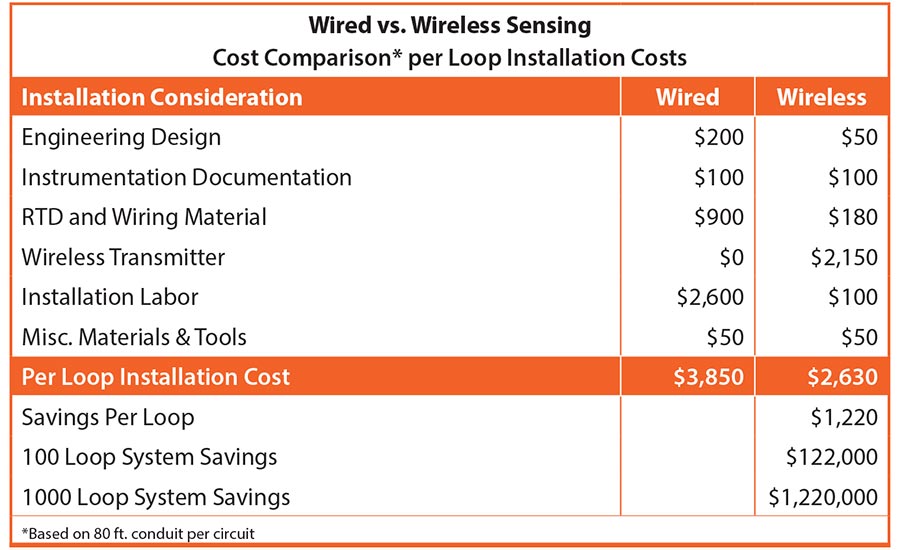 TABLE 1. The installation costs of the sensors on a heat trace system are reduced using wireless technology.

Hybrid sensor mapping schemes provide for design flexibility. Sensors can be altered to support process changes, and improperly tagged circuits can be remapped without lifting any control wiring through the control panel’s HMI.

In addition, mapping multiple sensors to a single heat trace power output also can be accomplished. This provides the highest degree of flexibility — without ever needing to lift sensor wiring from the control panel — and facilitates mapping of wireless field devices.

3. They Offer Security, Reliability and Interoperability

WirelessHART addresses these concerns and is specifically designed for process measurement and control applications. It operates over a mesh network topology, and each device in the network has the capability of rerouting signals through neighboring devices, greatly increasing reliability. 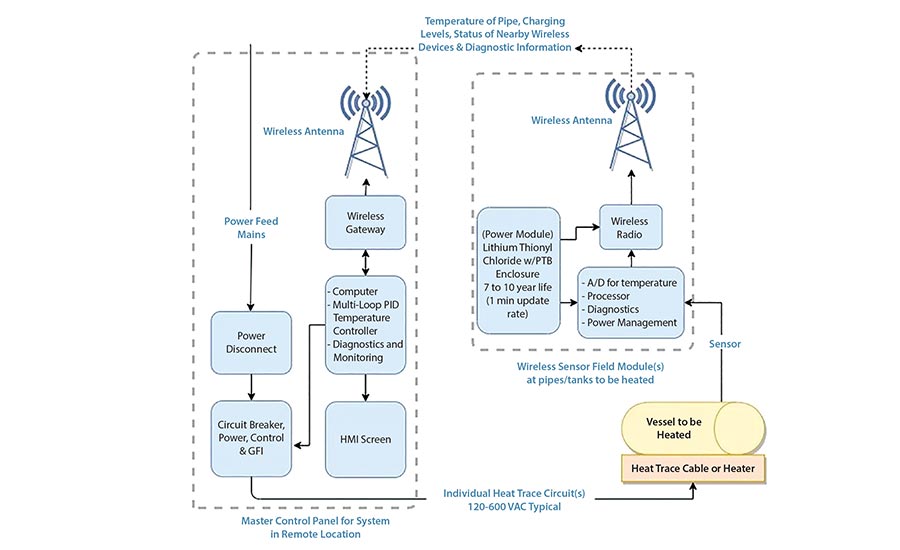 WirelessHART is an interoperable and open industrial wireless sensor networks standard that operates over the 2.4 GHz unrestricted industrial, scientific and medical (ISM) radio frequency band and adopts the physical layer from the IEEE 802.15.4 standard. Channel hopping occurs over 15 different channels to help evade signal interference while a time-synchronized MAC layer supports the coexistence of other networks such as ISA-100.11a.

Utilization of industrial wireless standards and certifying devices to WirelessHART helps prevent rogue service attacks, denial-of-service attacks, spoofing and replay attacks. End users can select a level of security that best suits the intended application with the capability of managing and allocating security encryption keys for each device in the network. Even though the wireless mesh network may extend beyond plant boundaries, use of tested and approved industrial protocols safeguards the network and prevents unauthorized devices from interfering with the system.

By using wireless technology, installation costs of the sensors on a heat trace system are reduced. A typical heat trace circuit will require about 80’ of resistance temperature device (RTD) sensor wiring. Many systems include hundreds of circuits of control in large industrial facilities. Typical installed cost savings by utilizing wireless are summarized in table 1. The calculations reflect the heat trace system alone; further savings are possible by eliminating the wiring or batteries of other field devices.

Some heat trace control and monitoring systems provide for additional operating and maintenance cost reductions. The adoption of wireless sensors allows users to capture diagnostic data while a wired RTD sensor only transmits process temperature. Users can check the ambient temperature of the device, observe the status of nearby sensors, monitor for issues with the sensor itself, and take corrective actions that can prevent unnecessary downtime. 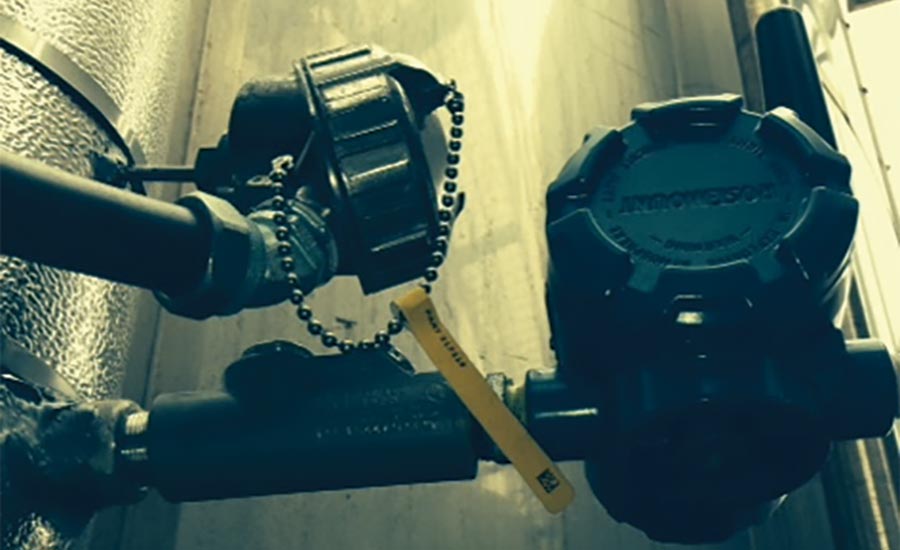 These advanced capabilities also reduce maintenance costs when there is a system failure. It effectively eliminates the need for a technician to physically troubleshoot the sensor and identify the cause for device failure. All data is readily available via the control panel or other wireless device used for device configuration, diagnostics and calibration.

Additional cost savings are realized if the process requirements change and the sensor needs to be moved. Wireless sensors facilitate these process changes and may be easily lifted off the pipe and relocated. There is no need to re-engineer sensor wiring and conduit. Engineering drawings for the location of the sensor simply need to be updated, reducing reinstallation labor costs and time.

If the system provides mapping functionality, inputs and outputs can be soft programmed through the interface. In addition, if spare heat trace circuits have been specified in the control system, new process lines can be added without disturbing sensor wiring by simply adding another wireless device.

Chris Myers is the global product manager, heat trace, with Chromalox. The Pittsburgh-based company be reached at 412-967-3800 or visit www.chromalox.com.

Mark Crombie is vice president, heat trace, with Chromalox. The Pittsburgh-based company be reached at 412-967-3800 or visit www.chromalox.com.