An edge programmable industrial controller connects directly to sensors and actuators through its I/O, yet it can be used to provide cloud-connected data collection and process automation.

An OEM in California wanted to rethink its machine design. The company, which builds ovens for industrial applications, sought to differentiate its ovens from those of its competitors. Feedback from their customers pointed to three ways they could improve:

The OEM’s engineers explored a number of ways to achieve these customer requests.

First, they explored ways to simplify integration with popular process control system tools such as drivers for an OPC UA server. But, because control systems are proprietary, a driver would have to be developed separately for each system. Because the company’s ovens were used with many types of systems, this one-at-a-time approach would not be cost effective.

Second, they looked at integration with existing HMIs; unfortunately, they would run up against the same problem. The engineers considered other options for an HMI, including an improved interface on the machine itself and even a mobile app. These ideas sounded possible but expensive to develop.

Third, reducing customer costs seemed even more difficult since each was unique and not under the OEM’s management.

Then, the OEM’s engineers realized: all the ideas depended on data. If they could get operational data from in-place ovens at customer locations, they could analyze it to improve their products’ efficiency.

The oven manufacturer’s engineers also realized that this type of data could be analyzed to help reduce customer costs by providing oven maintenance services. For example, the OEM could track burner ignitors, anticipate failures and even call the oven user in advance to avoid unplanned downtime. Scheduled maintenance would likely be reduced as well, replaced by preventive maintenance. With further analysis, even predictive maintenance was possible, to determine the likelihood of failures before they might occur.

The oven manufacturer was confident its customers would appreciate these cost reductions and services. But, to get the oven data from a customer’s site, the OEM would have to gain access to the customer’s network. The customer’s IT department would need to open incoming firewall ports and allow the OEM to request, or poll, the data. IT departments would never allow this type of potential breach to their network security.

So, how could the OEM redesign its ovens to meet the customers’ wishes without spending so much time and money, and causing major security problems? 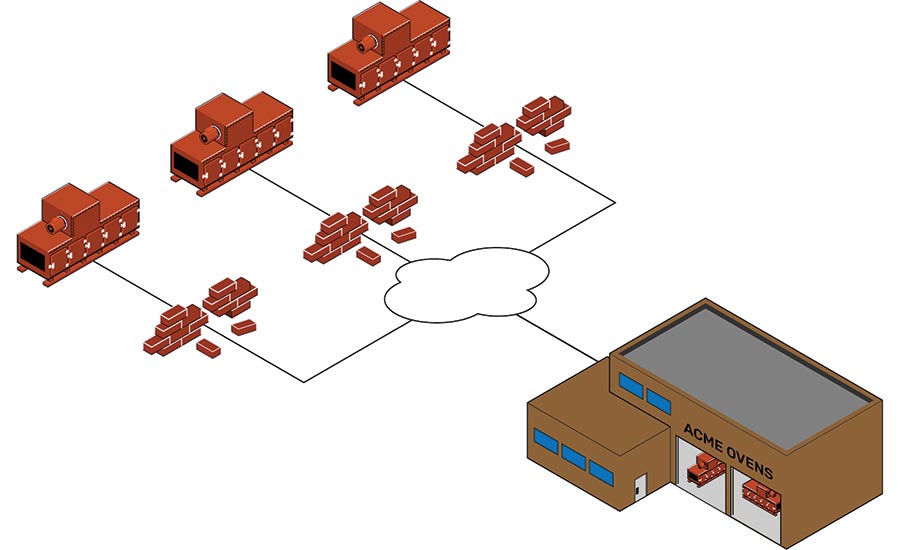 The oven manufacturer’s project touched on three challenges many automation engineers find with the Industrial Internet of Things (IIoT): complexity, security and expense.

The Challenge of the IIoT

The oven manufacturer’s project touched on three of the challenges most automation engineers find today with the Industrial Internet of Things (IIoT):

Any IIoT- or data-intensive automation application seems to end up involving far more complexity, many more security risks and much greater investment in time and money than many companies want to expend or can afford.

Getting data from the edge of the network — from the sensors and actuators in factories and remote sites — to the databases and people who need to use the data can be daunting. Bidirectional communication — for control as well as monitoring and data acquisition — can be even tougher. 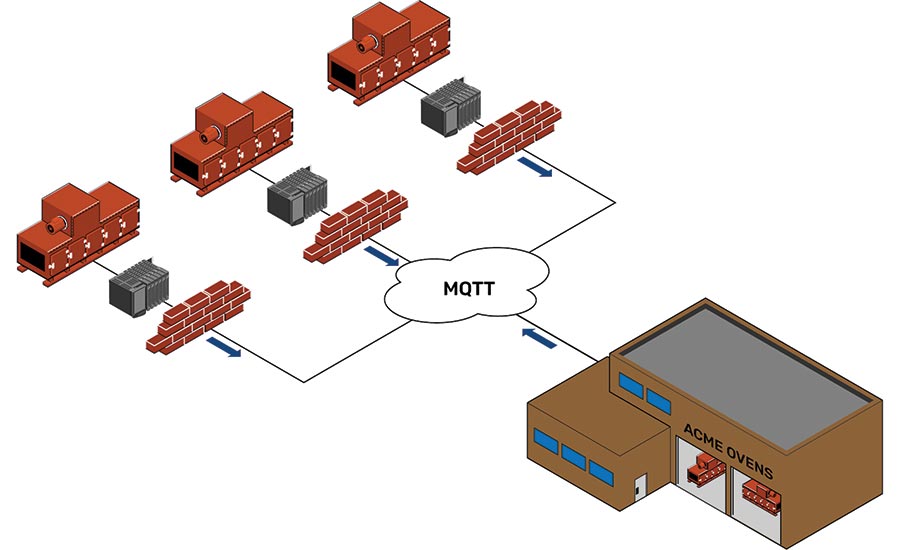 An edge programmable industrial controller eliminates middleware and reduces the steps required to get the necessary data. As a result, it reduces complexity, minimizes security risks and decrease the time required for installation and maintenance.

Most control systems and equipment use protocols and networks that are proprietary or specific to automation. Examples include Ethernet/IP, Modbus, Profibus, serial and OPC. By contrast, computers and mobile devices use standard Ethernet or wireless networks, and open protocols and standards.

Translating data between these systems and moving it to where it is needed involves expense and middleware: computers, gateways, drivers, parsers, customer software and licenses. As soon as data moves outside its immediate network or off premises — for use in the company computer network, remote locations or on a tablet or smartphone connected to the internet — middleware increases, and security concerns balloon.

Automation and an IIOT Alternative

One alternative is to employ an edge programmable industrial controller. Such a device eliminates the need for middleware and reduces the steps required to get the necessary data. Effectively, it reduces complexity, minimizes security risks and decreases the time and expense required for installation and maintenance.

From a security standpoint, all communications are device-originating, outbound-only connections from the edge programmable industrial controller to the broker over secure, encrypted connections. Once initiated, data can flow in both directions.

A closer look at the technology can help explain how an edge programmable industrial controller can help overcome common automation challenges.

Edge. All data acquisition starts at the edge because that is where data is produced. Whether it is a manufacturing line or shipping department in a factory, bar-coded containers in a warehouse, or pumps, pipes and storage tanks at remote sites, all are at the edge of the network. All have data that can be used to improve processes and profits.

Getting data directly from the source significantly increases the likelihood that it is accurate. An edge programmable industrial controller sits at the location where the process data (temperature measurements and the like) are being acquired. It connects directly to sensors and actuators through its I/O, the inputs and outputs that gather sensor data and send control commands. It also connects to existing PLCs or other devices to gather their data, and to issue commands if needed.

An edge programmable industrial controller at the edge of the network actively works on the data as well. It filters out anomalies; instead, it labels, stores and transmits data only by exception. This reduces network volume and the need to convert values from one protocol to another. Such preprocessing can help improve operations as well as enterprise and business cloud applications.

Because it is the single source for data, an edge programmable industrial controller also can securely share this data with software and equipment. This includes other control systems, building management systems, databases and cloud services.

Industrial. Controllers often are placed in severe environmental locations. One problem with PCs in industrial automation is that an off-the-shelf PC may not be able to stand up to the harsh environment. While more durable, industrial PC are more expensive. 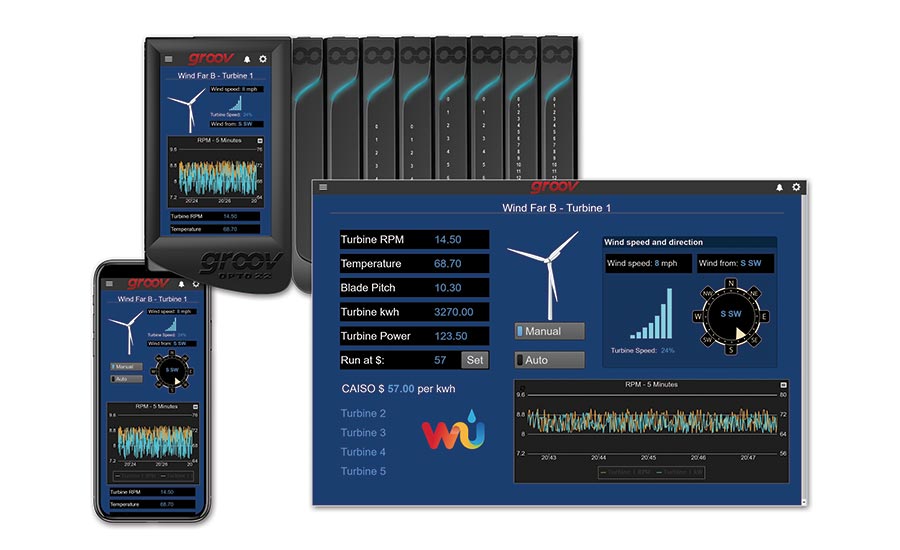 An edge programmable industrial controller connects directly to sensors and actuators through its I/O, the inputs and outputs that gather sensor data and send control commands. It also connects to existing PLCs or other devices to gather their data, and to issue commands if needed.

Controller. At its heart, an edge programmable industrial controller is a real-time industrial controller designed to run control applications. Because the device was designed by control engineers, it includes features such as built-in touchscreens, web-based management applications to configure I/O and networking, and functions to simplify commissioning and troubleshooting.

Putting the Controller to Work

After learning about the edge programmable industrial controller, the oven manufacturer’s engineers added the control into the design of its ovens. For the industrial ovens, the controller replaces the PLC or industrial PC (or both) that used to be required. The controller is wired directly to sensors and actuators in the oven and provides control, monitoring, data processing, communication and visualization in a single unit.

For control programming, the OEM can use flowcharting, IEC 61131-3 languages or secure shell access (SSH) for a custom program running on the Linux OS. Depending on the oven size, the oven manufacturer offers HMI options:

Because the control’s system management software is web-based, the OEM can apply software updates and manage the oven from its location rather than having to go to the customer’s site.

For the oven manufacturer, perhaps the greatest advantage of the new controller is the ability to get the data they want from its ovens installed at customer sites —without causing security issues for the customer. The oven manufacturer can take advantage of the controller’s ability to publish and subscribe for data communications from its customers. This feature works by setting up a central broker (locally or cloud based) that handles all data communications. Each data source sends data to the broker only when it changes (report by exception). Equipment and software needing data subscribe to the desired data, and they receive it from the broker only when it changes.

Most important from a security standpoint, all communications are device-originating, outbound-only connections from the controller to the broker over secure, encrypted connections. (Secure, device-originating, outbound connections are normally permitted by most IT departments.) Once initiated, data can flow in both directions. Firewalls allow outbound communications, so there is no need to open unsecure ports in firewalls. Security is maintained and IT involvement is reduced. Because it reduces network traffic and maintains security, a publish/subscribe communication method is suitable for remote locations.

In conclusion, an edge programmable industrial controller provides automation engineers real-time control for all kinds of traditional automation applications. It also allows them to provide the IIoT and data-based tasks needed in modern automation schemes.

Benson Hougland is the vice president, marketing, with Opto22. The Temecula, Calif.-based company can be reached at 800-321-6786 or visit www.opto22.com.