An Alternative to Field-Erected Cooling Towers

The features found in plastic cooling towers are prompting some industrial processors to rethink selection criteria.

When it comes to heavy industrial operations, large cooling towers — often the size of multi-story buildings — are required to cool processes and keep high temperatures in check. While effective tools of process cooling, large field-erected systems have a few less-than-desirable features: prolonged installation time, metal corrosion and extensive ongoing maintenance. Yet because such cooling towers offer significant advantages and cost savings over other cooling options, they are viewed as a basic necessity.

“The biggest problem with metal-clad cooling towers — regardless of their size — is that they are susceptible to corrosion, which requires considerable maintenance,” says Ben Stolt, branch manager of the Knoxville, Tenn.-based plant of Tencarva Machinery Co. “This means you have to deal with a lot of expensive, unplanned downtime.” Tencarva Machinery is a distributor of liquid process equipment and custom engineered systems, most of which incorporate pumping packages and electrical controls. 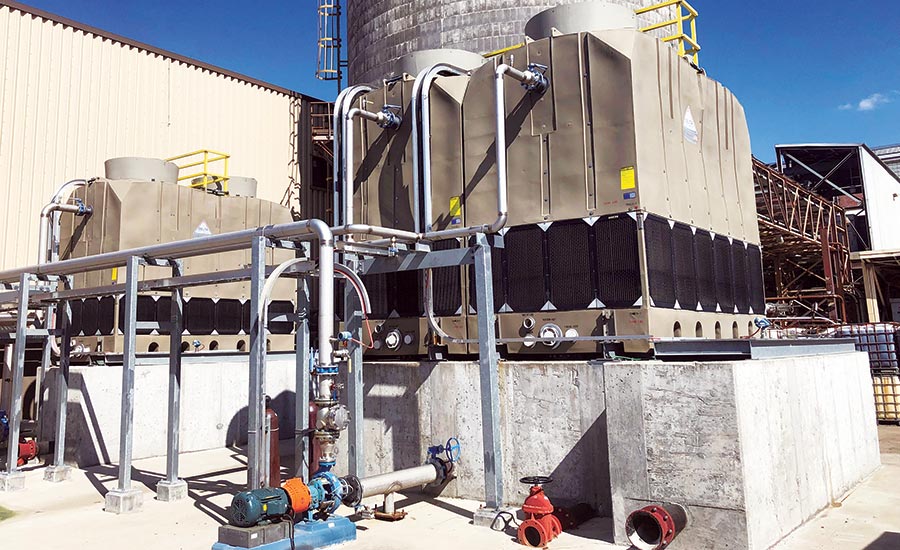 “Some manufacturers just seem to accept that a continuous cycle of repetitive repairs, unplanned downtime and maintenance are simply a cost of doing business,” says Stolt.

Despite that, Stolt says Tencarva is seeing customers from all sectors choosing cooling towers constructed of high density polyethylene (HDPE). Engineered plastic is corrosionproof, which reduces the need for maintenance. Some systems can cut energy consumption by as much as 70 percent, reducing operational costs, and some plastic cooling towers come with long-term warranty protection.

With a cooling capacity of up to 2,500 tons per cluster, the adoption of modular HDPE towers is growing in heavy industrial operations. Stolt cites the savings in on-site construction costs and delays. “Compared with the construction effort required to build a large structure in the field, installing the HDPE type of cooling tower is a much simpler process,” says Stolt. “In fact, we just installed a five-cell modular tower design in two days.” 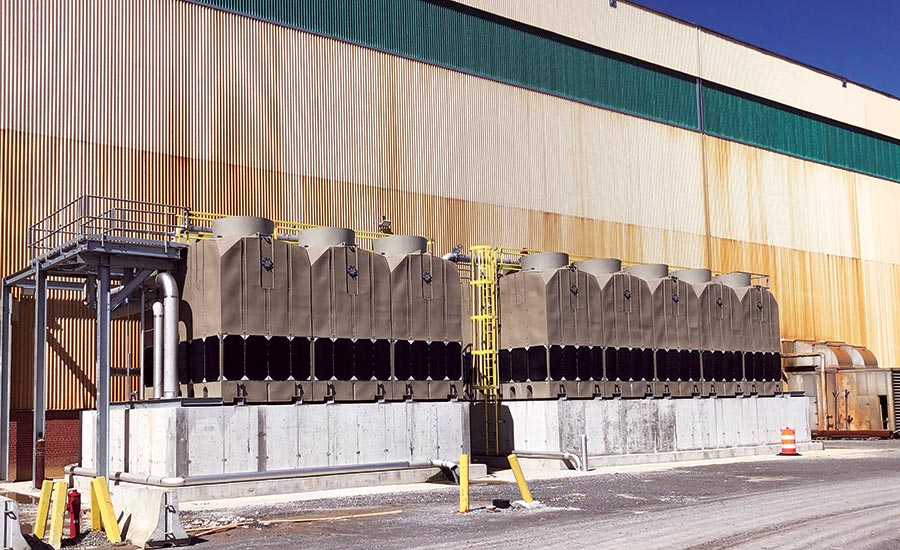 An advantage of the modular design of the HDPE cooling towers is the potential to expand cooling capacity when necessary by adding one or more tower cells.

Sizing Up the Situation

Recently, this scenario played out when Tencarva-Knoxville proposed a new cooling tower system for a major paper manufacturing operation located in eastern Tennessee. The mill was converting substantial capacity from the production of one type of paper to another. The engineering team at the mill decided its original cooling tower structure —originally built in the 1960s and rebuilt three times since — must be replaced.

Gerald Kennedy, project engineer on the paper mill equipment-replacement project, explained that, like other manufacturers, his company’s management had been inclined to use the basic point-of-failure philosophy. This meant servicing the cooling towers on an as-needed basis — even though that approach led to repeated operational interruptions.

“It was a bit frustrating to see that management was inclined to replace the existing tower structure with pretty much the same thing,” Kennedy says. “I thought there had to be a better technology that could handle our applications more efficiently.” 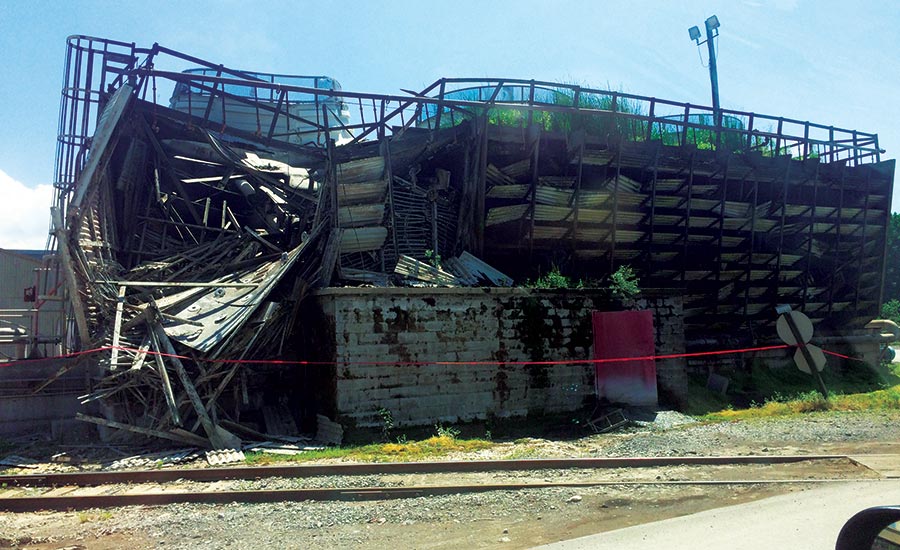 After researching the options, the mill’s engineering team convinced management to replace the existing system with a modular HDPE tower. The team was convinced the plastic cooling tower design could provide efficient performance as well as savings on maintenance and energy. Kennedy consulted with Ben Stolt to determine which tower design would provide an optimum long-term solution. The company chose engineered plastic cooling towers developed by Delta Cooling Towers. “We ultimately arrived at a configuration of Delta’s TM Series towers,” Stolt says.

This modular system of towers is made up of cells that can be nested together using a shared platform. The towers can be installed on the ground or on a rooftop.

For the paper mill, the primary replacement system was composed of eight cells. Five cells are devoted to the “dirty loop” and used to cool vacuum pumps that potentially can contain paper residue. The flow rate in the dirty-loop cells is 1,800 gal/min, with temperatures of 115°F in and 85°F out. In addition, the dirty-loop cells have a special splash-type heat transfer fill the tower to prevent paper residue from fouling the typically clean water fill.

The other three cells are used to cool the “clean loop” at the mill, which services heat exchangers and other uncontaminated applications. The flow rate on the clean loop is 3,600 gal/min, with 95°F in and 85°F out of the clean cooling tower structure. 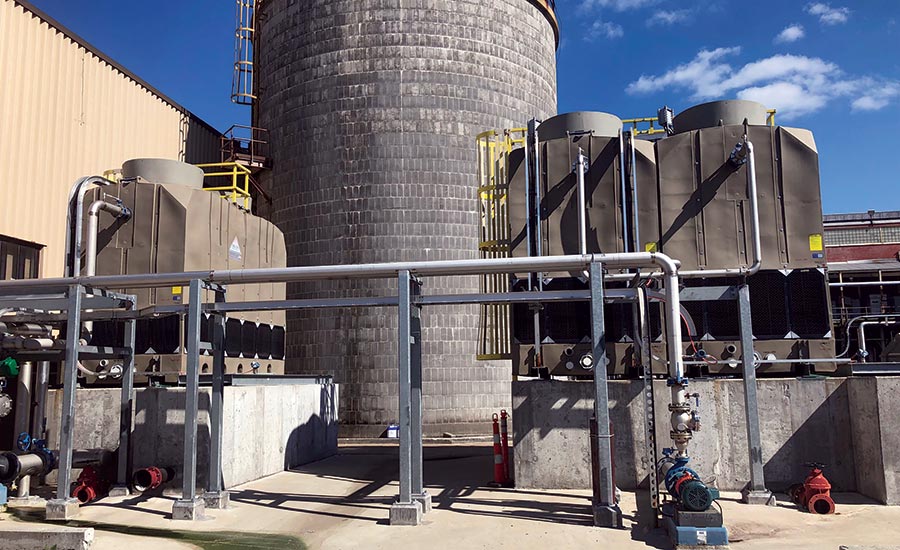 The engineered cooling towers are designed as modular units. The towers are made up of cells that can be nested together using the same platform. They can be placed on the ground or on a rooftop.

While the team at the paper mill primarily sought out the engineered plastic cooling towers for their resistance to corrosion, Kennedy recognizes the plastic units offer other advantages. The modular design will allow the mill to expand cooling capacity if necessary by adding one or more additional tower cells. In addition, the new cooling towers include an air-moving system powered by direct variable-frequency drive motors. “The increased efficiency of these drives, which eliminate the friction loss of gears and pulleys, has already translated into energy savings, helping to deliver an earlier than expected ROI,” Kennedy says.

Kennedy expects the mill’s new cooling towers to provide optimal performance for decades to come, noting that many of the original HDPE towers installed in the late 1970s, are still in operation today. “And, the 20-year standard warranty was certainly a deciding factor for us,” concludes Kennedy. PH

How to Take Credit for an IPL Alarm in Your DCS, Part 2

How to Successfully Implement Evaporative Cooling