How to Successfully Implement Evaporative Cooling

Two case studies highlight ways evaporative cooling is used in the process industries to reduce the impact of heat-generating equipment such as paint ovens and plastic-molding equipment.

By Mike Kaler, Mestex, a Division of Mestek

Evaporative cooling has been around for centuries. Also called adiabatic cooling (particularly in Europe), evaporative cooling is the earliest form of air-side cooling known to man. In spite of that, it also is probably the least understood — and sometimes maligned — solution to cooling.

In the peak of summer, the temperature in Dallas can reach over 105°F (dry bulb) with relative humidity in the 50 percent (or higher) range. Inside a factory without any cooling system, temperatures can reach the upper 90s, and worker fatigue becomes a major safety and productivity issue. When heat generated by fabrication machinery is added to the environment, localized hot spots are even more intolerable.

Such was the case for a maker of HVAC equipment in Dallas. As part of the manufacturing processes at the facility, extensive welding occurred, and three large paint booths added heat to the sometimes oppressive ambient conditions.

The paint booths exhaust large amounts of air during the painting process. This creates negative pressure in the factory that pulls the ambient 105°F air into the plant across the entire workforce. The welding areas produce smoke and fumes that affect workers in that part of the factory. Also, because of the negative pressure created by the paint booths, smoke and fumes get drawn into the plant. Given these oppressive summer conditions, the HVAC equipment maker realized a cooling solution was needed. As in many cases though, the solution required a system approach rather than addressing just one part of the problem.

In order to mitigate the welding smoke and fumes, local exhaust fans were added. This resulted in even more negative pressure within the factory. The outside air being drawn into the building to offset the negative pressure entered through the various overhead doors that remained open during the day. In addition to bringing in hot and humid outside air, this allowed dust and insects to enter the space. 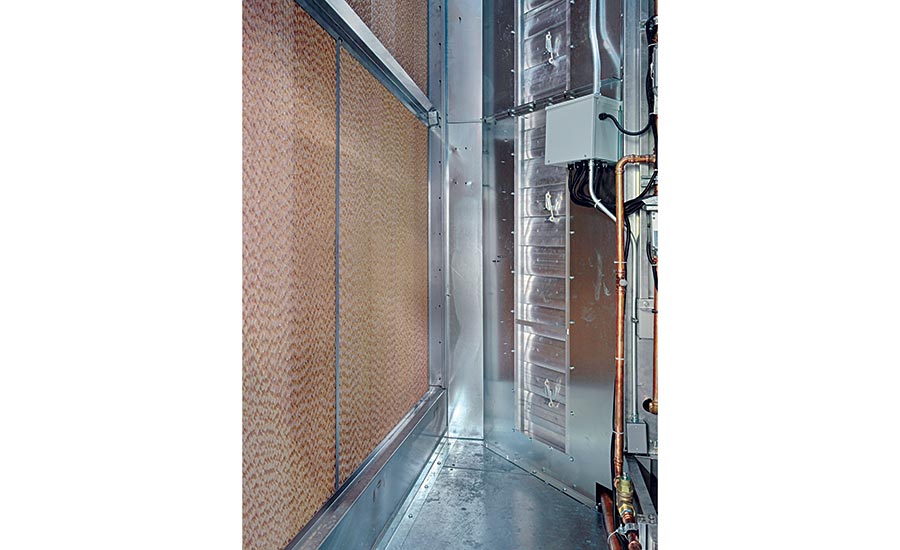 To address this, heated air curtains were installed on every overhead door. When applied properly, these devices can greatly reduce the amount of contaminants that are drawn through the openings. (Although this article focuses on a cooling solution, keep in mind that the negative-pressure situation would draw 30°F winter air into the space. Using a heated air curtain would improve that condition as well.)

The final step was to provide a way to offset the negative pressures in the plant with equipment that would temper and filter the air entering the plant. This equipment could have been conventional rooftop AC equipment, but the capital and operating costs would have been excessive. The need to offset large amounts of exhaust would have necessitated 100 percent outside-air units, making operational costs even greater. As a more cost-effective option, evaporative cooling units were selected due to their lower operating costs and simple maintenance.

In designing the cooling equipment, one factor the HVAC equipment maker had to decide was how extensive the cooling system should be. In many cases, evaporative cooling is used as spot cooling. In such cases, the air-distribution outlets are dropped to about 12’ above the floor and aimed toward areas where workers are stationed using adjustable grills. If the air velocity is kept between 800 to 1,000 ft/min, the result is typically a comfortable local work environment.

Utilizing a spot-cooling approach would reduce the number of units required but would still leave areas of the plant susceptible to hot spots. Instead, company management chose to install 35 roof-mounted units to cover the entire 140,000-ft2 factory.

For the HVAC equipment maker, the results were twofold. First, the temperature in the space was reduced by at least 10°F (5.5°C). When combined with the increased air movement, the working conditions became more favorable. Second, by installing evaporative cooling for the entire facility, the pressure went from negative to positive, further reducing uncontrolled infiltration. 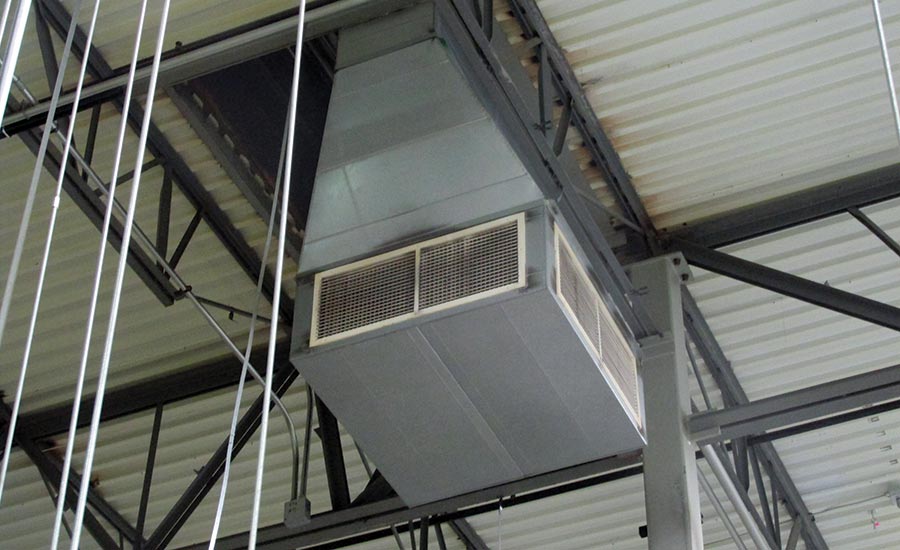 At the HVAC equipment manufacturer’s facility, cooled air is distributed throughout the facility rather than employed only for spot cooling.

At a plant outsize of Atlanta, evaporative cooling was selected to offset heat gains at a 58-year-old plastics processing facility. The manufacturing plant, which processes plastics products as varied as medical devices and writing instruments, experiences summer dry-bulb temperatures near 98°F (36°C) with 75 to 80°F wet-bulb temperatures.

The manufacturing process at this facility requires a high degree of cleanliness in the finished products. The plastics are designed to be porous, with the porosity custom designed for the application. This requires a consistently clean supply of air for worker comfort in this hot, humid location.

Like the HVAC equipment maker, the management team at the plastics processor could have selected rooftop equipment that would have provided filtration and temperature control. The manufacturing process produces a lot of polymer dust, however, that would clog filters and coils in the HVAC equipment. The plant conditions made it impractical to use any type of system that involved returning dust-laden air to the cooling equipment.

A further advantage to using evaporative cooling in this case is that an evaporative cooler in operation is an effective air washer/filter. Thus, the air entering this facility is both more temperate and cleaner. Since implementing the first evaporative cooling equipment, this company has installed more than 20 such units, and the facility consistently operates at about 78°F (25°C) inside.

An evaporative cooling unit typically is a simple machine that includes:

Optimizing performance means checking the system every 30 days or so. Inspecting the pads during operation to make certain that water is distributed evenly over the entire pad surface without splashing or spraying off into the fans is important for the best temperature reduction. Most industrial evaporative-cooling units will include a manual water-flow control valve that can be adjusted to balance the water flow over the pads. More sophisticated units might include multiple sets of pads with thermostatic temperature control that activates the stages as needed. 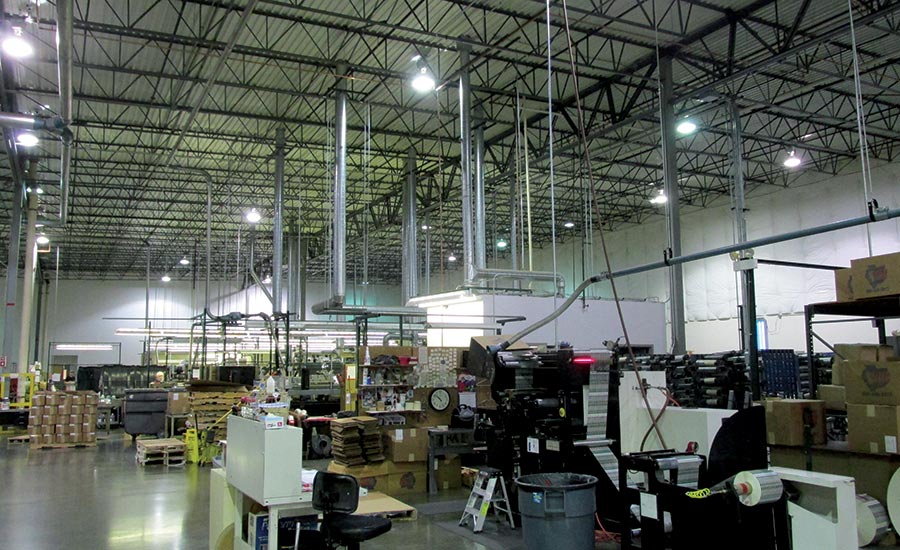 A label and tape company employed evaporative cooling to both cool the space and add enough humidity to prevent the build up of static electricity on the production materials.

Other routine checks include inspecting the fan belts (if used) to be sure they are in good condition. Also check that the pumps are operating properly. Another area of the system that should be maintained is the water system itself. One reason that many people object to evaporative cooling is the “swampy” smell that can be detected in many systems. Typical reasons for this odor include:

Mike Kaler is the president of Mestex, a division of Mestek. The Dallas-based company can be reached at 214-638-6010 or visit www.mestex.com.