This website requires certain cookies to work and uses other cookies to help you have the best experience. By visiting this website, certain cookies have already been set, which you may delete and block. By closing this message or continuing to use our site, you agree to the use of cookies. Visit our updated privacy and cookie policy to learn more.
Home » Modern Drying Ovens: Advancing at the Pace of Technology
EquipmentProcess ControlOvensFinishing (Paint & Other)
Ovens

Modern Drying Ovens: Advancing at the Pace of Technology

A lot has changed in just 35 years. Consider how modern industrial ovens compare with those of the past. The innovations help improve the thermal processing of your products.

When I started my junior year of engineering school in the mid ’80s, the lease on the apartment I rented did not start until October. The university was 200 miles from where I grew up, but it just happened that my dad was working at that time in the same city. The coincidence gave us an opportunity to camp out together — three weeks of bonding time.

My dad was a construction electrician, and he often had to travel to where the work was. At that time, he was wiring the new paint line at a Ford plant. Today, that Ford plant is gone. High-end apartments overlooking the Mississippi are sprouting up in its place. The Ford Ranger that was manufactured there is no longer in production, and my dad is gone too. It seems like a blink of an eye sometimes, but 35 years is a long time.

The paint line he was wiring to cure the finish on those Ford Rangers included an infrared paint cure tunnel. What is different, I thought to myself, about drying and curing ovens today from 35 years ago? I would love to call up my dad today to ask him about the project. (I did have an opportunity to tour the plant once, so I can draw on my own memories of the oven.)

A number of changes and improvements in curing ovens have occurred over the past 35 years. That is why if you have a 35-year-old oven — or even slightly newer — it may not be doing the job you hope it is doing.

Modern controls are one of the best reasons to consider replacing an old oven.

Though I will focus on the changes that have occurred, it might be easier to cover what hasn’t changed first.

In 1985, using infrared to cure paint was still a relatively new concept. Before that, convection heat was the standard for large-scale paint curing. Then as now, the industry constantly seeks out more efficient thermal processing methods and ways to improve the quality of finished goods. Today, infrared paint curing systems are the norm for large-scale assembly lines.

The overarching themes around which the changes to industrial ovens can be described fall into three general trends: 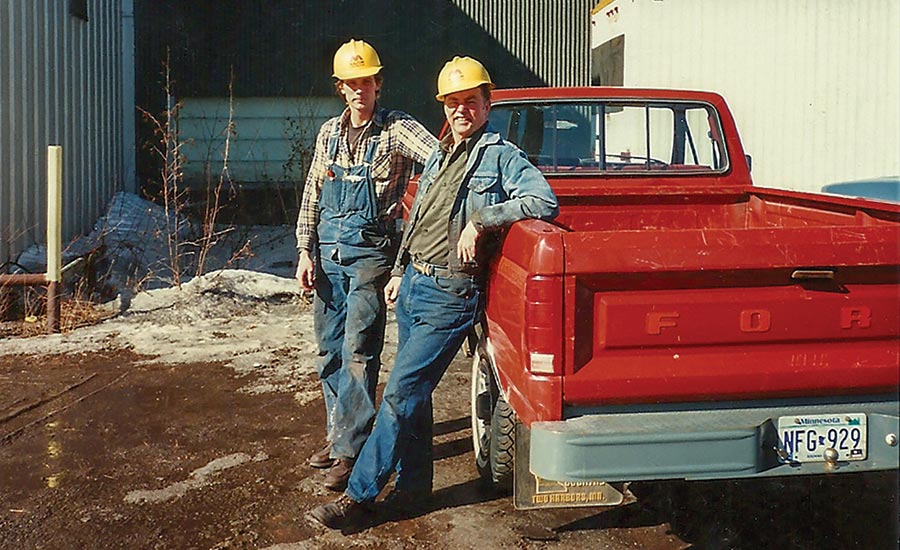 The author, Rolf Kragseth, and his father, Bud Kragseth, are shown. Just 35 years ago, the Bud helped install a “new-fangled” infrared oven on a paint-curing line at a new Ford plant. How would that oven be different if installed today?

Let’s take a closer look at each.

Modern controls are one of the best reasons to consider replacing an old oven. In the mid-1970s, Dad worked on an automation project upgrading the ore docks in our hometown with state-of-the-art (for the time) controls. The project included installing barcode readers to track train cars as they queued to dump loads of iron ore into freighters bound for the steel mills.

This application was among the first industrial application for barcodes. Today, UPC codes are ubiquitous, and we’ve come to expect a lot more from our technology.

Away from Paper Toward Data

Today, barcode scanners are increasingly easy to integrate into modern controllers. They can be used to track and report part, batch and recipe numbers. (Meanwhile, today trains are tracked with RFID.) Oven manufacturers regularly develop ovens utilizing barcode scanners and reporting software, bringing such technology to the facilities where they will be installed.

Circular chart recorders, once common, have given way to paperless recorders. The move from paper to the availability of dynamic data affords ever more opportunities to track and analyze data (as well as a step toward a paperless society). Tracking and analyzing data is the impulse at the heart of every movement toward Industry 4.0.

From Mechanical to Solid State

In 1984, discrete digital solid-state temperature controllers were not widely used for industrial ovens. But, by 1986, oven manufacturers were offering digital PID controls with thermocouple inputs utilizing a thermocouple instead of the mechanical thermostat bulb to control temperature.

Silicon-controlled rectifiers (SCRs) and solid-state relays (SSRs) were not widely used at that time due to their cost and size. Most ovens were controlled by mechanical controllers and heater relays. SCRs have far faster response and, with a well-tuned PID controller supplying the signal, accuracy and response is much better than it was with the old-fashioned controls.

Controllers play a key role in overall oven performance. A programmable microprocessor-based controller is needed when multiple setpoint temperatures are required, or when the rate of heating must be controlled. An Ethernet port or Modbus 485 serial communications port allows data communication between the oven controller and a PC. 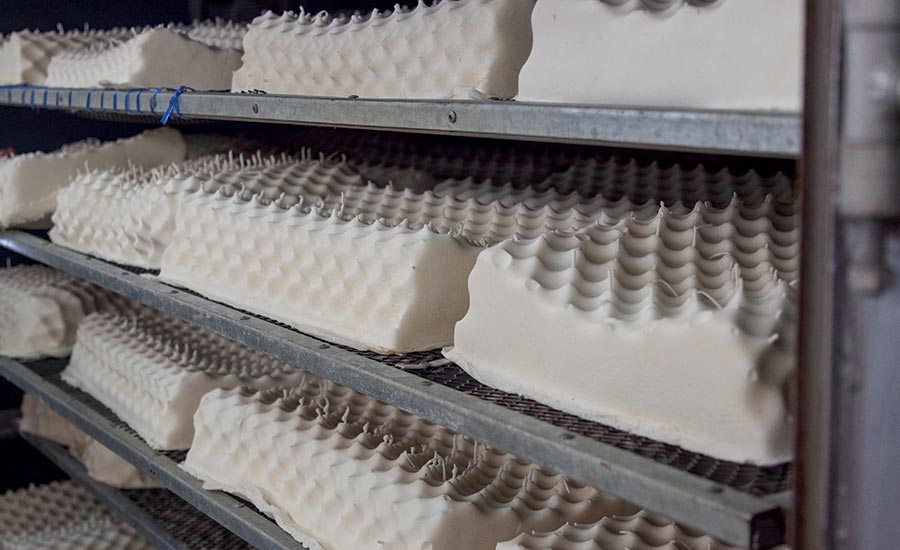 The design of new industrial drying and curing ovens reflects changes to processes, controls and material changes in ways that provide a much-improved heating system for modern-day drying applications.

I remember in seventh-grade science class, the teacher used mercury to demonstrate the density of various materials. We were admonished not to touch the mercury because it was bad for us. But, what seventh grader could resist the urge to touch liquid metal? Fortunately for all, national and international regulatory bodies now impose strict limits on occupational exposure to mercury.

In the 1980s, many ovens used a simple thermostat control. It was based on a pneumatic bulb or a bulb of mercury connected to a linkage and diaphragm to close the contacts. As the material in the capsule expanded or contracted, the circuit could open or close the contacts. By contrast, modern digital electronic controls improve the operating performance and eliminate the need for mercury in control applications.

Insulation is industrial commodity that has changed. My high school, built in 1939, had boiler piping with asbestos insulation throughout the building. Though the asbestos was largely contained, some students knew that if you gave a pipe a good whack, you could raise a small cloud of dust. (Teenagers are invincible, and nobody knew what mesothelioma was.) That building and others like have now been razed, largely because the cost of mitigating the asbestos made renovation too expensive. 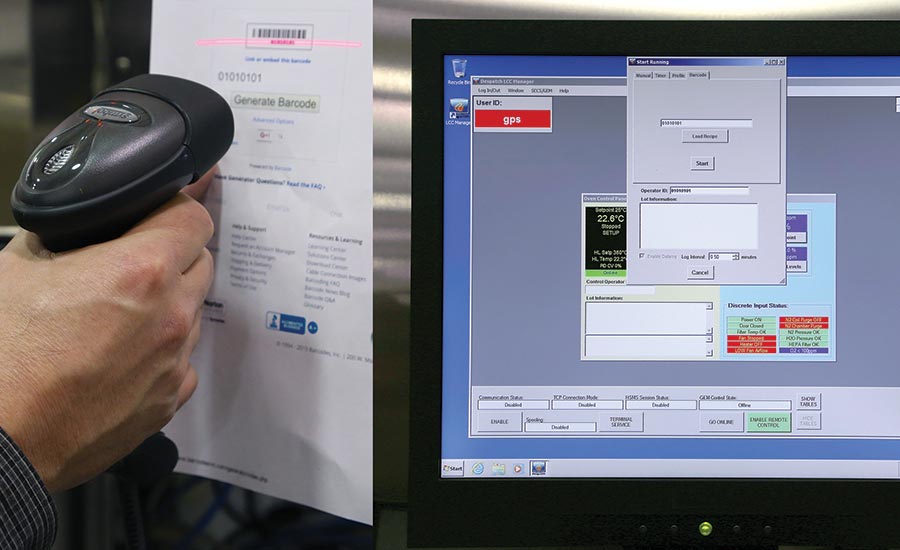 Today, barcode scanners are increasingly easy to integrate into modern controllers. They can be used to track, record and report part, batch and recipe numbers, among other duties.

Once thought useful for things like door seals and pipe insulation, asbestos, which has been linked with adverse health effects, was banned under the Toxic Substances Control Act in 1976. Yet even into the ’80s and even today, there were old ovens in service with asbestos insulation. They are expensive to dismantle but a liability to keep. (If undisturbed, the asbestos is largely contained until you decommission the oven.)

Today, mineral wool and ceramic wool are the most prevalent insulation materials used in industrial ovens. Door gaskets are made of fiberglass or Kevlar. All are easy to work with, inexpensive and are made from common materials.

The future has more banned substances in store. Today’s electronics need to comply with new environmental regulations such as RoHS, REACH, WEEE and Prop 65. REACH and Prop 65 regulations are especially fluid, adding new substances to their lists on a regular basis. Invariably, these rules will impact any repair vs. buy decisions in the future.

3. Be Prepared for the Dangers That Remain

Processes for drying and curing applications have changed significantly in recent years. New paint formulations drastically reduce volatile organic compounds (VOCs), and new formulations on the market with zero VOCs are often better than the high-VOC paints of the past. Powder coating, a zero-VOC process, continues to gain a larger share of the coatings market driven primarily by environmental regulations.

The growing popularity of zero-VOC processes will impact drying and curing equipment selection. For example, a process that produces no VOCs requires no Class A solvent-rated oven. But, think first before phasing out Class A.

The biggest hazard in the operation of industrial ovens is the risk of explosion from the buildup of fuel or solvent vapors in the chamber. For that reason, until all surface coatings are VOC free, I recommend a Class A oven for safe operation — and the flexibility to use any coating technology in your operation. (One common requirement for paint-drying ovens that often can be eliminated when using low or zero-VOC coatings, however, is the mandate to designate the space around the curing oven as hazardous Class 1, Division 1.)

The current industrial oven and furnace standard — NFPA 86 — actually came into effect with the 1985 revision, which consolidated NFPA 86A and NFPA 86B into a single standard. NFPA 86 is an effective safety standard that has long governed the design, installation and use of industrial ovens. Updates are made every four years. For ovens designed for drying flammable solvents, the following safety features have always been required elements in the oven design: 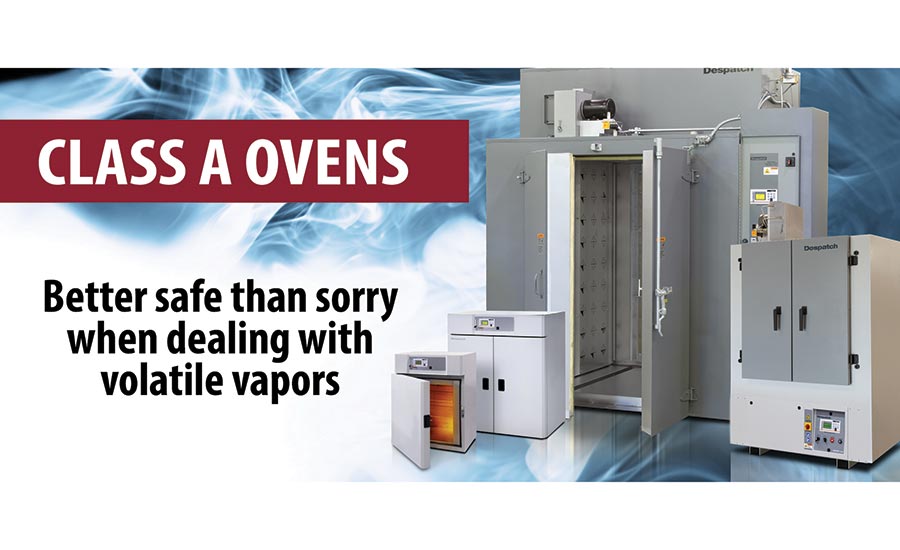 The biggest hazard in the operation of industrial ovens is the risk of explosion from the buildup of fuel or solvent vapors in the chamber. For that reason, until all surface coatings are VOC free, a Class A oven is recommended for safe operation.

Today’s industrial drying and curing ovens have responded to process, controls and material changes in ways that provide a much-improved oven. When combined with the technology breakthroughs of the last 35 years, it makes sense to examine whether the continued use of an older oven makes good business sense. Rolf Kragseth is an applications engineer with Despatch Industries, Minneapolis, a manufacturer of industrial ovens and other thermal products. The company can be reached at 952-649-5289 or visit www.despatch.com.