Control valves are critical components in desuperheating and steam-conditioning systems. They require an understanding of system operation before they are specified.

Desuperheating systems are used to reduce the temperature of process steam by spraying water into superheated steam, thereby reducing its enthalpy. Steam-conditioning systems combine the desuperheating function with pressure reduction.

Figure 1 depicts the main components of a desuperheating and steam-conditioning system.

During operation, steam is fed into a pressure-reducing valve, and this steam flow enters the desuperheater section. There, it receives fluid from a spray-water valve to cool it. Temperature and pressure readings are taken downstream of the desuperheater section. These readings are used as inputs to the control system, which regulates the actions of both the pressure-reducing valve and the spray-water valve as needed to maintain the desired temperature and pressure. 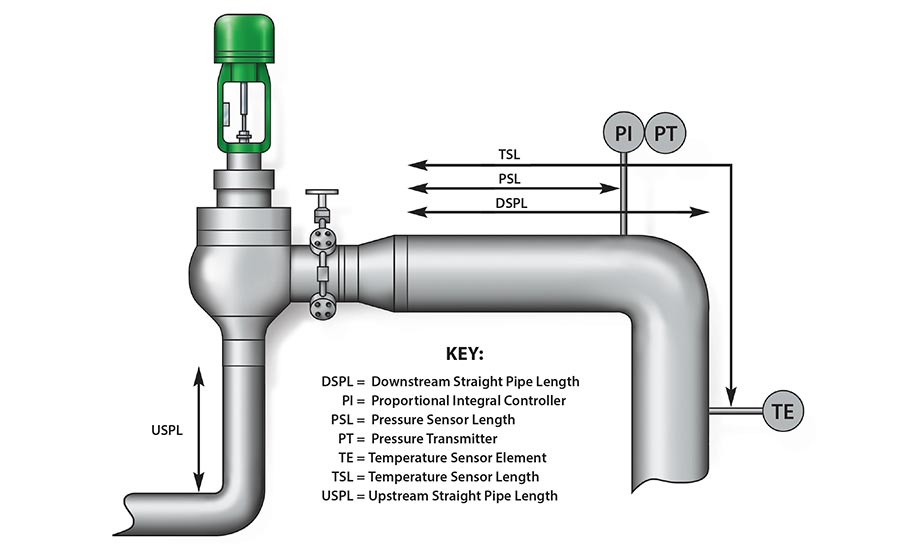 FIGURE 1. The main components of a desuperheating and steam-conditioning system are shown.

The desuperheating setpoint can be either a temperature or an enthalpy. It is used in conjunction with the downstream temperature reading to dictate the amount of cooling water injected into the steam. The amount of water added to the superheated steam is regulated by a control valve. This spray-water control valve needs to respond quickly to required travel changes and should be capable of Class V shutoff when closed. Also, the high pressure drop in the water system often requires the valve to incorporate anti-cavitation trim to protect it from damage during operation.

The main challenge in desuperheating is the creation of temporary two-phase flow in the steam pipe through the introduction of spray water. Proper design of a desuperheater aims to limit any negative effects by reducing the amount of time the steam resides in the system.

Steam velocities are an important factor in limiting these negative effects. Good piping practices dictate that water flow is limited to velocities of 15 to 25 ft/sec, but steam line velocities often are in the range of 200 to 400 ft/sec. Until the spray water evaporates, water droplets will remain entrained in the steam at high velocity. If these droplets strike piping elements or other equipment, they can cause erosion damage.

At steam velocities below roughly 30 ft/sec, there is increased risk of water falling out of the steam and gathering in low points in the piping, causing problems such as thermal fatigue and cracking. In some cases, this water can get picked up when the steam velocity increases, potentially creating a water “slug” and causing damage to downstream equipment. In addition, the water that falls out will not desuperheat the steam, making it harder to reach the desired setpoint. Missing the setpoint will trigger the spray-water valve to open further, exacerbating the problem.

An additional challenge within some process heating applications is the nearness of the desired setpoint to saturation. Steam close to or at its saturation point is the most efficient for heat transfer due to the energy transferred when that steam condenses within a heat exchanger. Saturated steam within a desuperheating system, however, can be problematic due to its interaction with the temperature element. If entrained water contacts the temperature sensor, it will incorrectly read the saturation temperature of water rather than the actual temperature of the steam, disrupting system control. Because of this interaction, it is recommended that at least 10°F of superheat is maintained as the temperature setpoint for these applications.

Several aspects of installation should be considered for proper operation and risk minimization. Two key desuperheating system considerations are:

Straight pipe length (SPL) is considered to be where the water droplets are small enough to be carried by the steam through a change in direction instead of striking the pipe wall. From the spray point to this distance, there should be no changes in direction or diameter, or any objects or instruments extending into the flow stream.

Temperature sensor length (TSL) is the point downstream of the desuperheater where the spray water is completely evaporated and the temperature is consistent throughout the pipe area.

Between the SPL and the TSL, there can be changes in direction, but there should not be any steam insertion or extraction points. TSL calculations determine the optimum point for temperature measurement.

Pipeline size and schedule — both at the point of spray and downstream of the desuperheater — help determine the best style of desuperheater, appropriate nozzle selection and downstream piping requirements. Pipe liners sometimes are used to protect steam piping, but if the correct spray patterns are employed and the steam velocity is adequate to keep the water in suspension, they may not be necessary. If a pipe liner is used, it must be accounted for in desuperheater sizing and selection. Using a liner may reduce interior piping diameter and increase steam velocity.

Spray-water strainers with a mesh size appropriate for the nozzle should always be used in desuperheating systems. Clogged nozzles can affect spray capacity and may cause the spray pattern to be directed onto the pipe wall (figure 2). Regular nozzle inspection and maintenance practices also are critical to proper operation throughout the life of the desuperheater.

Finally, every desuperheater installation should be designed with adequate drains within the piping system. Each drain should be automated to remove any water that falls out during operation or condenses during shutdown. 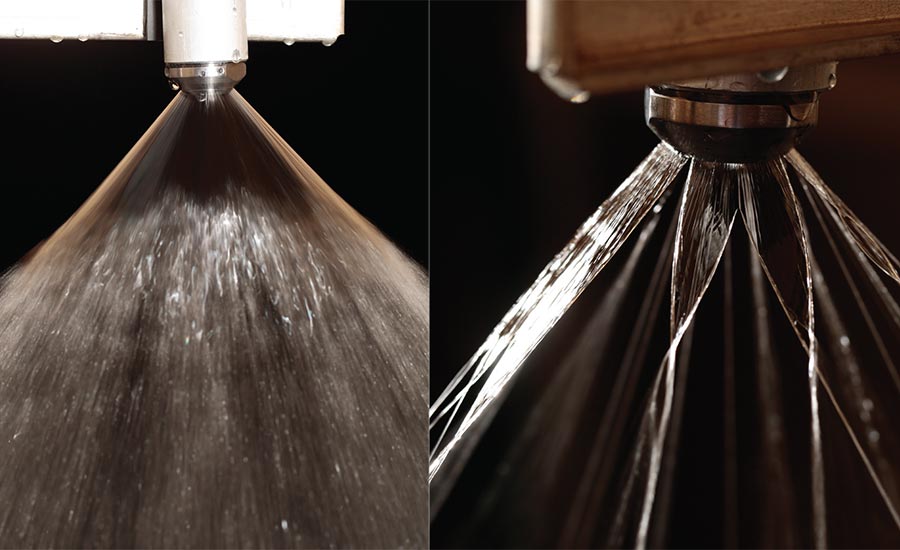 FIGURE 2. Spray water strainers with a mesh size appropriate for the nozzle should always be used in desuperheating systems. Clogged nozzles can affect spray capacity and may cause the spray pattern to be directed onto the pipe wall. Shown here are functioning (left) and clogged (right) spray nozzles on a desuperheater.

Placement of the desuperheater also is important. Putting the spray point immediately after the steam pressure-reducing valve takes advantage of the turbulence exiting the valve. This helps mix the two-phase flow and decreases the residence time needed for evaporation.

Venturi- or ring-style desuperheaters can be used to spray perpendicular to the steam flow. An advantage to spraying perpendicularly is the shearing effect of the steam on the water, which helps break up the water droplets. Care must be taken, however, to avoid spraying onto the pipe wall opposite the nozzle. Venturi-style desuperheaters typically are used with smaller pipe sizes (NPS1 to NPS8). Ring-style desuperheaters are most appropriate for use with larger pipe diameters (NPS8 to NPS60) where steam velocities are above the 150 to 350 ft/sec limits of the insertion styles, or when spray capacities greater than 20 Cv are required.

A steam-conditioning system includes the temperature reduction of a desuperheater coupled with pressure reduction. Two common examples of steam-conditioning applications are turbine bypass and process steam letdown. In turbine bypass, the steam pressure and temperature need to be reduced to a level acceptable for the downstream piping or condenser. In process steam letdown, the steam is being used for processes that are designed to operate at a certain pressure, so stepping the steam down from the boiler pressure to a common header pressure is required.

The net effect is an increase in the superheat of the steam, which can lower the overall heat transfer efficiency of the system. Integrating a desuperheater into the pressure-reduction valve allows for a quick reduction of this superheat into the optimal range.

When pressure reduction and temperature reduction are required, there can be benefits to using a steam-conditioning valve rather than a separate pressure-reducing valve and desuperheater. First, with a combination solution, there is only one installation, reducing time and construction costs. Second, having the desuperheater coupled directly with the valve causes more efficient evaporation due to the turbulence exiting the valve. As previously noted, this increased efficiency means the water evaporates sooner, reducing the required length of downstream piping. 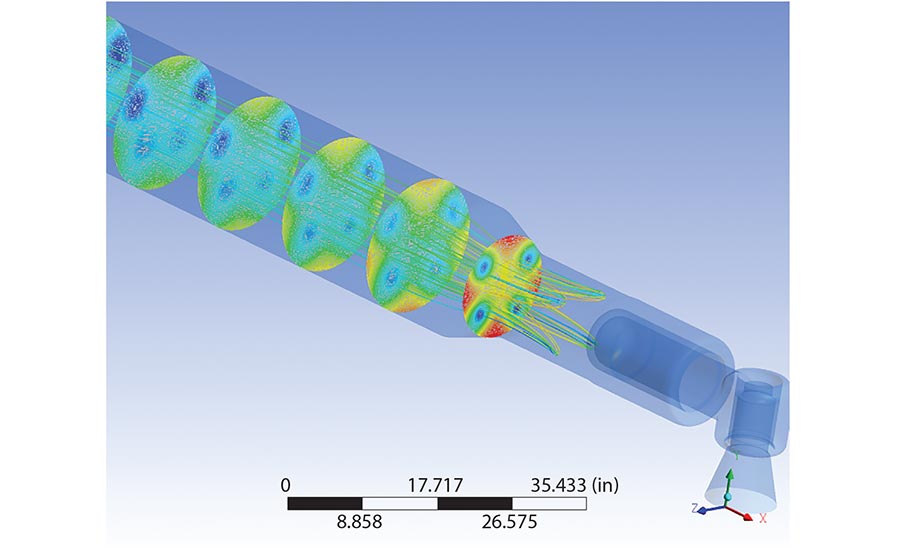 FIGURE 3. A computational fluid dynamics (CFD) analysis shows the temperature effect on a process stream due to the injection of water just downstream of the pressure-reduction portion of a steam-conditioning valve.

Figure 3 shows a computational fluid dynamics (CFD) analysis depicting the temperature effect on a process stream due to the injection of water just downstream of the pressure-reduction portion of a steam-conditioning valve.

Control of a steam-conditioning system has a similar framework to the control of a desuperheating system but adds the complexity of the pressure reduction. Pressure and temperature setpoints are used to regulate the position of both the pressure-reduction valve and spray water valve in conjunction. As these variables interact, constant feedback and dynamic response is needed to produce the desired downstream conditions. For this reason, proper understanding of process conditions during system design and accurate measurements of operating conditions are both important factors for a properly operating system.

In conclusion, desuperheating and steam-conditioning systems are widely used in the power and process industries. Control valves are key components of both of these systems, and there are many variables affecting their operation. An experienced valve vendor can examine the operating conditions and help ensure the appropriate valves are selected to provide efficient operation with minimal required maintenance.

Mark Petruccelli is a sizing and selection specialist for critical services at Fisher. For more information from St. Louis-based Fisher Valves, call 888-889-9170 or visit www.emerson.com.

Justin Goodwin is the director of the steam-conditioning group at Fisher. For more information from St. Louis-based Fisher Valves, call 888-889-9170 or visit www.emerson.com.