This website requires certain cookies to work and uses other cookies to help you have the best experience. By visiting this website, certain cookies have already been set, which you may delete and block. By closing this message or continuing to use our site, you agree to the use of cookies. Visit our updated privacy and cookie policy to learn more.
Home » Getting the Most from a Thermal Liquid Heating System
Fluid HeatingHeat Transfer FluidsHeatersChemicals/PetrochemicalsFood ProcessingPlastics & Rubber
Thermal Fluid Heaters

Getting the Most from a Thermal Liquid Heating System

These systems offer benefits when high temperature rather than high pressure is essential if they are designed effectively.

Thermal liquid heating is a specialized form of process heating that harnesses the forced circulation of a special heating medium, called thermal fluid, as a liquid. In many types of process heating, high temperature rather than high pressure is essential where heat — not vapor or steam — is required. Thermal liquid systems generally can be used at high temperatures without a corresponding high pressure. Table 1 demonstrates the temperatures and corresponding pressures.

In the late 1800s in Europe, package thermal fluid systems began to be utilized, but it was not until the early 1950s that this technology became popular in the United States. Today, because of their advantages, they are becoming even more popular. Because the systems use high temperature heat without high pressure, in many cases, local inspection, permitting or attendance issues are not applicable. This is one of its primary advantages.

Since the 1950s, thermal liquid systems have been used in a variety of applications, including:

A closer look at the components that make up thermal liquid heating systems will provide an overview of the technology. 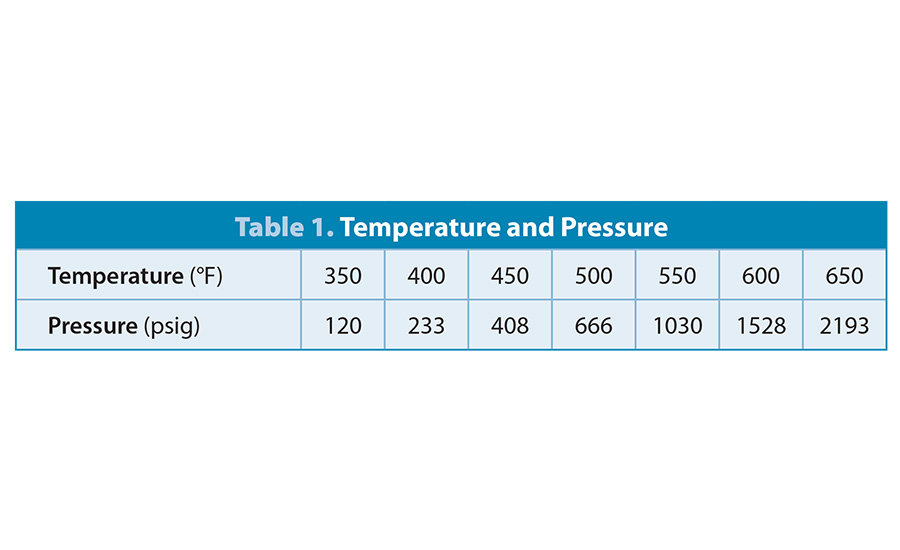 The Heater. Users will want to select a heater designed only for thermal liquids. An all-welded, bent steel-tube or helical-coil design allows for the continuous expansion and contraction to which the heater must be able to withstand without damage. In some models, double-welded construction eliminates the problems of rolled or poor joining of tubes that can be experienced in other designs.

The double-welded type of heater is preferred by many fluid manufacturers. Thermal liquids at advanced temperatures are so thin that only the best welding can contain the fluid without leakage. Because all fluids will burn in the ambient temperature of the gas flame, fluid leakage is serious concern to be avoided. The heater design must take in account any potential thermal liquid shock and have the ability to accommodate proper velocity and flow control in order to keep heat flux, film and bulk temperatures within the proper ranges. 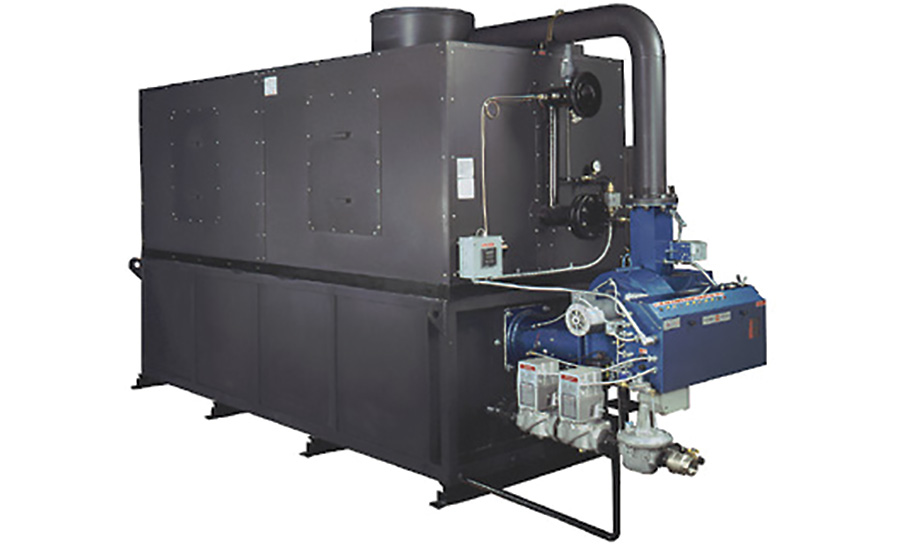 Thermal liquid systems can generally be used at high temperatures without a corresponding high pressure.

Generally, a velocity of 8 to 12 ft/sec is required across the internal tube surface. Due to the higher anticipated heater temperatures, a high temperature insulated cabinet should be incorporated into the design to help improve overall thermal efficiency. Additionally, the tube design must extract the optimum amount of heat from the burners. Special controls (not standard to other boilers) must be employed. Higher range temperature operating and high limit controls should be provided.

A pressure control should be provided to monitor the pressure differential across the heater, which serves as a good safety check for proper flow. A current sensor or relay interlocked to the heater pump motor and tied to the burner circuit helps ensure that the pump is running prior to burner operation. Factory Mutual (FM) trim or other control trim upgrades also are a good idea. Units should be available to burn natural gas, and propane-fired burners are offered with low NOX burners or with power burners for oil or power gas firing as well as bio gas.

Fluids. The fluid to be used must be selected based on its specifications. Fire resistance, cold flow and freeze points, high operating temperatures, viscosity at varying temperatures, life expectancy, vapor-pressure characteristics and, of course, fluid cost are among the deciding factors in fluid selection. There are a number of fluids available in the market. 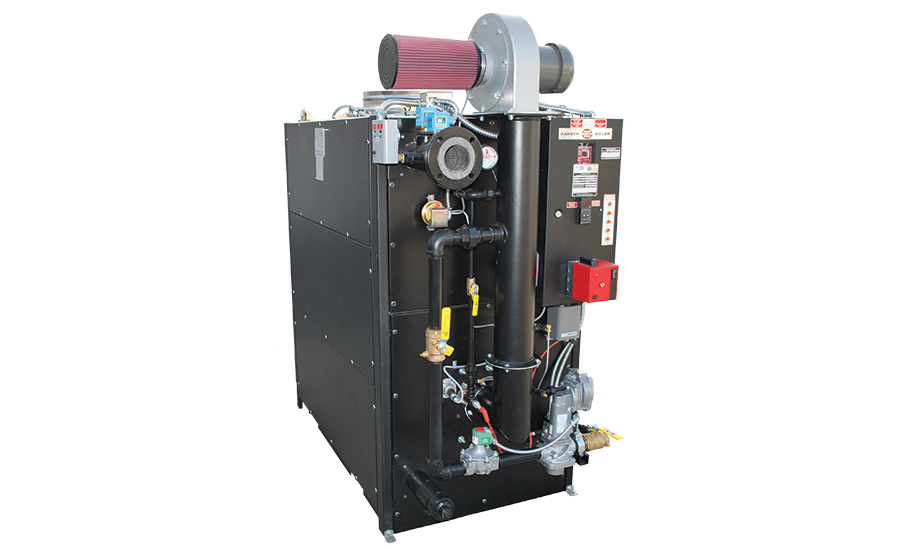 Thermal liquid heating is a specialized form of process heating that harnesses the forced circulation of a special heating medium as a liquid, called thermal fluid.

Some fluids reduce viscosity by 100 times — from 50 centistokes at 100°F (38°C) to 0.5 centistokes at 600°F (315°C). Velocity flow should not be less than 8 ft/sec, which with 1” pipe or equal as boiler tubing, represents approximately 20 gal/min per tube. Due to the change in viscosity with change in temperature, pump motor horsepower must be selected by considering both the cold and hot points of the system. Air-cooled mechanical seal-type pumps are the most common, but fluid-cooled and seamless pumps are available.

Tanks. Selection of the system expansion tank generally can be based on the simple formula of percent expansion for the specific temperature differential (∆T). This figure will be accurate enough for most applications. Normally, the expansion tank should be sized to be one-quarter full at ambient temperature and three-quarters full at maximum system temperatures.

A sight glass and low liquid level cutoff should be installed on the tank to monitor the liquid level. The tank should be mounted at the highest point in the system so that it can be vented. If this is not possible, an inert gas blanket is preferred with vapor bleeds placed at the highest points of the system to vent the system to the correct opening in the expansion tank. (Refer to piping diagrams.) Expansion tank pressurization with nitrogen or air may be necessary. 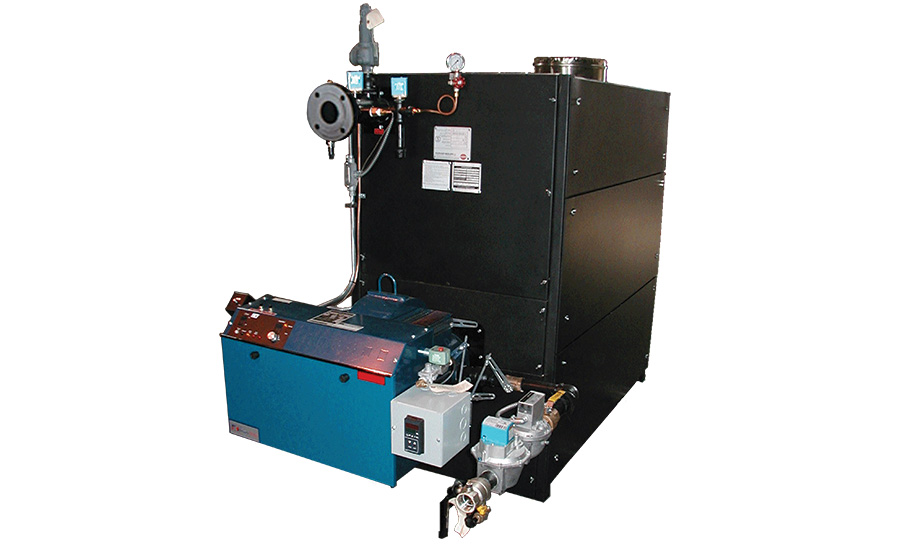 The fluid to be used in a thermal fluid heating system must be selected based on its specifications.

Because velocity is crucial, several scenarios could be explored.

The third option is the simplest system arrangement and specification. It is common and recommended when flow through the heater cannot be guaranteed with a one-pump system.

All system piping larger than 1” should be welded. When flanges are required, a high grade, Flexatallic high temperature spiral-wound gasket should be used. Petroleum-type pipe dope should not be used. All long, circulating lines should be protected with expansion joints to prevent damage due to expansion. Most Read Process Heating Products of 2020

4 Things to Consider Before Buying a Thermal Fluid Heater