Which Safety Oven Is Right for Your Process?

Safety oven designs — standard Class A, low oxygen Class A and explosionproof — incorporate specific components and heating methods to inhibit unintended combustion reactions. Aside from components, one of the biggest differences is how they approach the fire triangle.

Many processes involve the heating of volatile, flammable solvents, and these require some type of safety oven to mitigate the risk of a fire or explosion. These ovens fall roughly into three categories, depending on which side of the fire triangle they address.

The fire triangle — fuel, oxygen or heat (ignition source) — illustrates the three elements necessary for combustion. Safety ovens eliminate one or more of the elements in order to inhibit the combustion reaction.

Standard Class A ovens are designed in compliance with NFPA 86. These ovens address the fuel side of the triangle. Mechanical ventilation is used to dilute flammable vapors to a point where they are too lean to ignite. The process starts with a timed purge, ensuring that four volumes of fresh air are flushed through the system before the heat source is enabled. The dilution airflow rate is calculated to prevent the vapor concentration from exceeding 25 percent of the lower flammable limit (LFL). If the system includes a solvent monitor, then operation at up to 50 percent of the LFL is permitted. Also, explosion venting is required on Class A ovens.

The advantages of Class A ovens include:

With high solvent loads, however, there will be a large makeup airflow requirement. This can result in high operating costs due the need for constant heating of cold intake air. 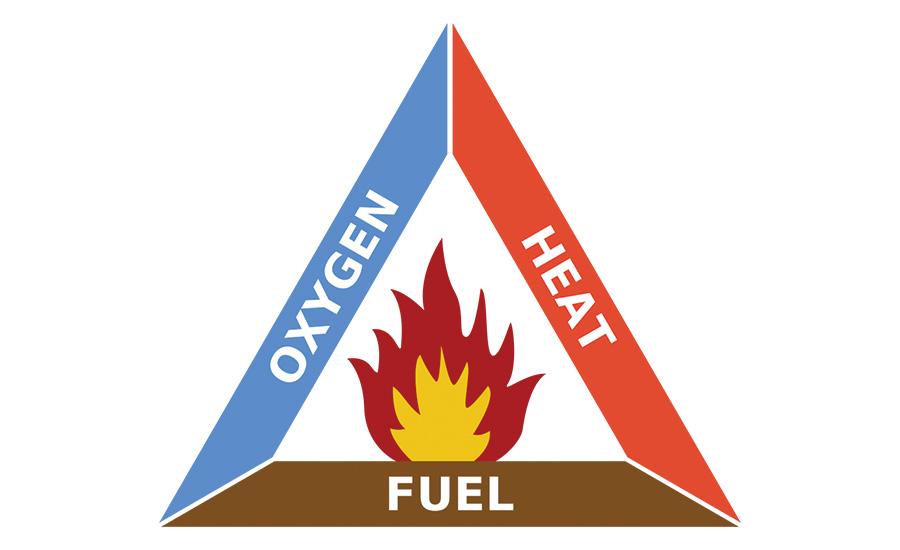 If, for any reason, the control system cannot hold the oxygen concentration below the LOC, then the heat is de-energized, and the cycle is aborted. Advantages of a low oxygen Class A oven include:

The low flow rate makes solvent recovery an attractive option for these ovens. Another advantage is that explosion relief is not required on low oxygen ovens. Disadvantages include the higher initial equipment cost and the ongoing cost of inert gas.

Explosionproof ovens are designed in compliance with NFPA 70, the National Electrical Code (NEC). These ovens are designed to address the heat side of the fire triangle by eliminating all sources of ignition. The oven itself is not designed to withstand an internal explosion. The electrical system is designed to comply with NEC requirements for electrical equipment installed in “Hazardous (Classified) Locations.” Motors, switches, junction boxes, conduit and other exposed components must be explosionprof (XP) rated.

Control boxes must either be XP rated or be purged and pressurized. Explosionproof enclosures are designed to withstand the full pressure of an internal explosion. By contrast, purged and pressurized enclosures are just regular sheet-metal control cabinets with a special control system that supplies a protective gas to the cabinet. Before the cabinet can be energized, four volumes of purge gas (usually just compressed air) are flushed through the box while a slight pressure is maintained. If at any time the pressure is lost, the system is automatically de-energized. 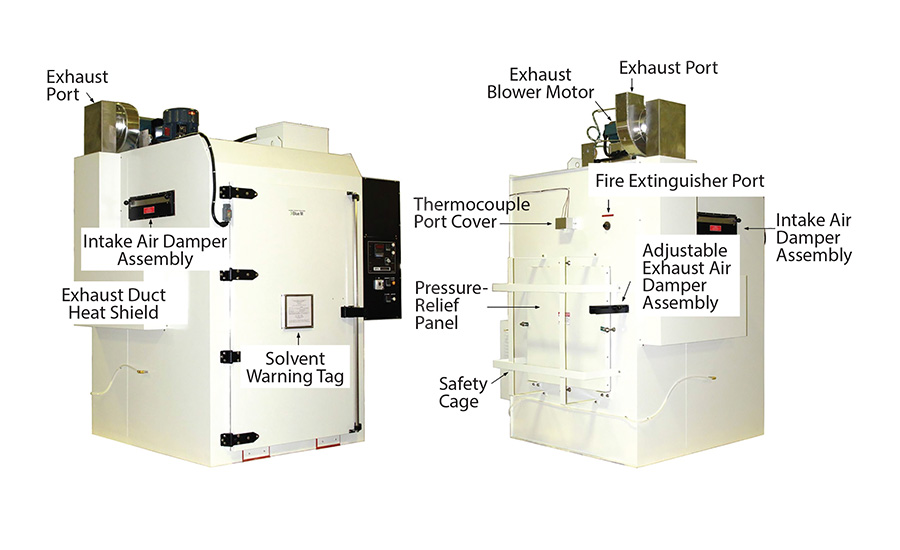 Sensors are protected through the use of intrinsic barriers. These protective devices are inserted between the sensors and the controls that read them. They limit the available energy to a level that cannot cause an ignition.

Fans or blowers must employ spark-resistant construction, per ANSI/AMCA standard 99-16. These air movers are designed so that ferrous components are prevented from coming into contact with each other.

In XP systems, the surface temperature of all exposed components must be prevented from exceeding the established temperature class (T-Code) for the classified area. In the absence of a T-Code, the limit is 80 percent of the autoignition temperature of the flammable material in degrees Celsius.

Heating options for explosionproof ovens can be tricky. The heating source typically is the hottest point in the system and, like all other components, it must not exceed the T-Code temperature. Gas burners and standard electric heating elements are by nature unsuitable. Typical options include steam or hot fluids, XP electric elements and friction heating. Each option has its own advantages and disadvantages.

Steam. If in-house steam is already available, then steam heat can be a practical option. Steam has an inherent safety advantage because the surface temperature of the heat exchanger can never exceed the steam supply temperature. 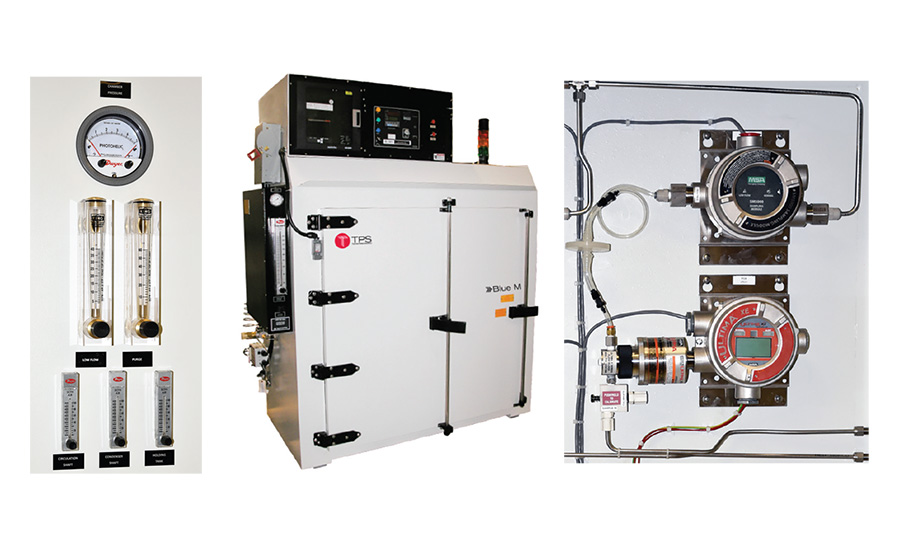 In steam systems, a regulator limits the supply pressure, and this automatically limits the saturation temperature. Temperature control is accomplished through the use of a two-way modulating valve. The piping system will also include a pressure regulator, strainer, steam trap and vacuum breaker. Shut-off valves (manual and automatic) as well as gauges and a condensate pump may be required. The piping and control valves can be moderately expensive, but the total system cost is reasonable if steam is already available. If a dedicated boiler must be provided along with the oven, then this can drive up the capital cost substantially.

Hot fluid supply systems generally include a circulation heater with XP heaters and controller, an XP fluid pump, piping and a three-way proportioning control valve. Expansion tanks frequently are required. As with steam, the hot fluid system has a safety advantage in that the process temperature cannot exceed the fluid supply temperature. With fluids, a redundant high limit controller should be used to back up the main controller. 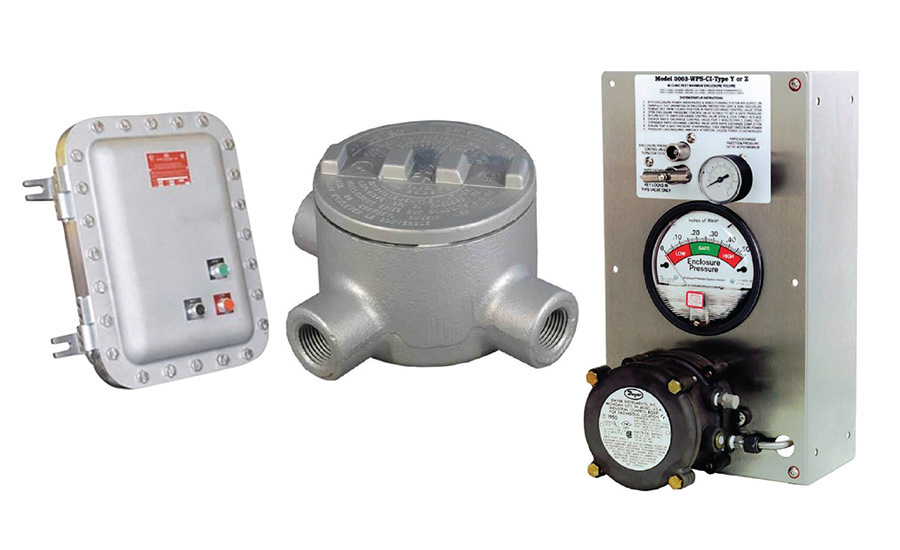 FIGURE 3. An explosionproof oven includes an XP enclosure, XP junction box, and a controller for purged and pressurized panel.

Advantages of hot fluid heating systems include the safety aspect, the fact that the heat exchanger surface temperature can be controlled precisely and that high power densities are achievable. Disadvantages include the complexity of the system, high capital equipment cost and higher maintenance costs.

Electric Heating Elements. Standard open-wire or sheath heaters cannot be used in explosionproof ovens because the surface temperature presents an ignition hazard. Heating elements must be controlled to prevent the surface temperature from exceeding the established T-Code. Heavy-walled, finned heaters can be used with thermocouples to monitor the surface temperature. Redundant high limit controllers are used to monitor each element. Ground-fault circuit breakers protect against hot spots in case an element would short out. Each element has limited heat output so multiple elements may be required. Each element must have the above safety components, so the cost can add up quickly if the process requires significant heat input.

Friction Heating. Fans and blowers always generate some heat due to churning of the air. This is known as fan friction, and it usually is viewed as an undesirable effect that consumes extra energy from the recirculation motor.

In a novel approach, however, some ovens are designed to purposely make use of fan friction to provide the process heating. Beyond the simplicity of this approach, these units have a safety advantage in that the process air itself is the hottest thing in the system. This is in contrast to the other methods of heating, where the heat source must be at a significantly higher temperature than the process in order to drive heat exchange.

An older approach to this technology uses a constant-speed blower to recirculate the process air and to also provide heat input by fan friction. A mechanical device with a fluid-filled bulb senses the process temperature and applies force to a damper, which controls the flow of cold makeup air entering the process. By controlling the mix of cold intake air with the hot process air, a desired setpoint can be maintained. Disadvantages of this system include the inability to change the process temperature without changing the makeup airflow rate, the fact that it can only provide single setpoint control, and that it is not appropriate for Class II areas (where the hazard is dust). 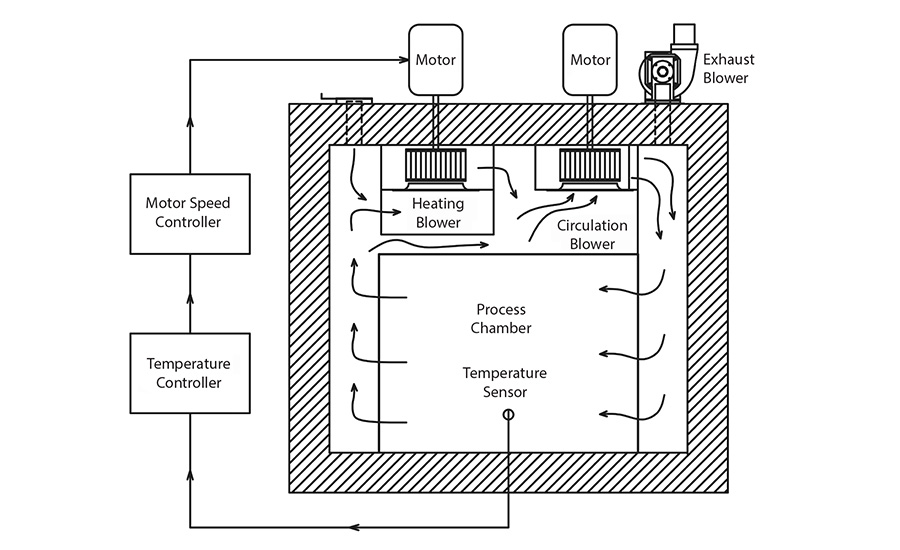 The patent-pending design using fan friction employs a separate blower to provide heat input while the circulation blower is used to keep the process flow moving. Advantages include its simplicity, independent control of recirculation and exhaust flow rates, use of a digital process controller to achieve programmable ramping profiles, and the fact that the system is suitable for use in Class II areas.

When selecting a safety oven, keep in mind that each approach to solving the safety problem comes with its own set of advantages and disadvantages (table 1). Understanding the benefits of each technology can help you select the one that will provide you with the best overall solution that meets both your short-term and long-term goals.

Is Infrared Right for Your Part?

Is Your Industrial Oven Telling You It Is Unsafe?

Oven Safety Is No Accident

Is Obsolete Equipment Putting Your Facility At Risk?