A lack of effective cooling due to heat exchanger failure can cause production losses and unplanned downtime. Fortunately, two common causes of exchanger loss — mechanical failures and chemically induced corrosion — can be prevented.

Heat exchangers are used in many critical processes to protect other valuable manufacturing equipment, optimize energy consumption and reduce associated operating costs. A properly selected, installed and maintained heat exchanger can help enhance the reliability and efficiency of a fluid system. When a heat exchanger fails, however, it can lead to costly downtime.

Two common types of heat exchanger failure — both which can be prevented — are:

This article will review the operational problems that can develop in a shell-and-tube type heat exchanger and describe the corrective actions that can be taken in order to prevent such problems.

Excessive fluid velocity on either the shell or tube side of the heat exchanger can cause damaging erosion as the tubing metal wears. If corrosion is already present, it can be accelerated. Erosion has the potential to remove the tube material’s protective film, exposing fresh metal to further attack. 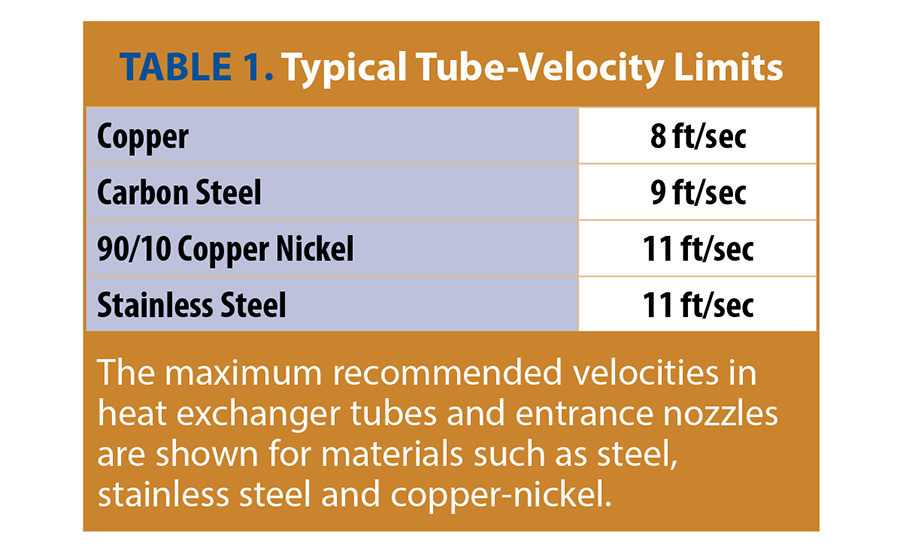 Several steps can be taken to minimize the risk of metal erosion. The maximum recommended velocity in the tubes and entrance nozzle is a function of many variables, including tube material, fluid handled and temperature. Materials such as steel, stainless steel, and copper-nickel withstand higher tube velocities than copper (table 1). Where practical, staying below these velocities will help minimize metal erosion.

Erosion problems on the outside of the tubes can occur with impingement of wet, high velocity gases such as steam. Wet-gas impingement is controlled by oversizing inlet nozzles, or by placing impingement baffles in the inlet nozzle.

Typical shell-side nozzle-velocity limits to prevent impingement erosion on the outside of tubes can be established with the following:

where density is in pound-mass per cubic foot (lbm/ft3) and velocity is the shell nozzle velocity in feet per second (ft/sec).

Pressure surges or shock waves caused by the sudden and rapid acceleration or deceleration of a liquid can cause steam or water hammer. The resulting pressure surges have been measured at levels up to 20,000 psi, which is high enough to rupture or collapse the tubing in a heat exchanger (figure 1).

To avoid the risks of steam or water hammer, cooling water flow always should be started before heat is applied to the exchanger. Modulating control valves also are preferable to fluid flow-control valves, which open or close suddenly and cause water hammer. If condensable fluids are handled in either the shell or tubes, vacuum breaker vents can help prevent steam hammer damage resulting from condensate accumulation.

The installation of properly sized steam traps with return lines can help prevent steam hammer by preventing condensation from accumulating in the shell. Plant managers also should ensure that the lines are pitched to a condensate receiver or condensate return pump. 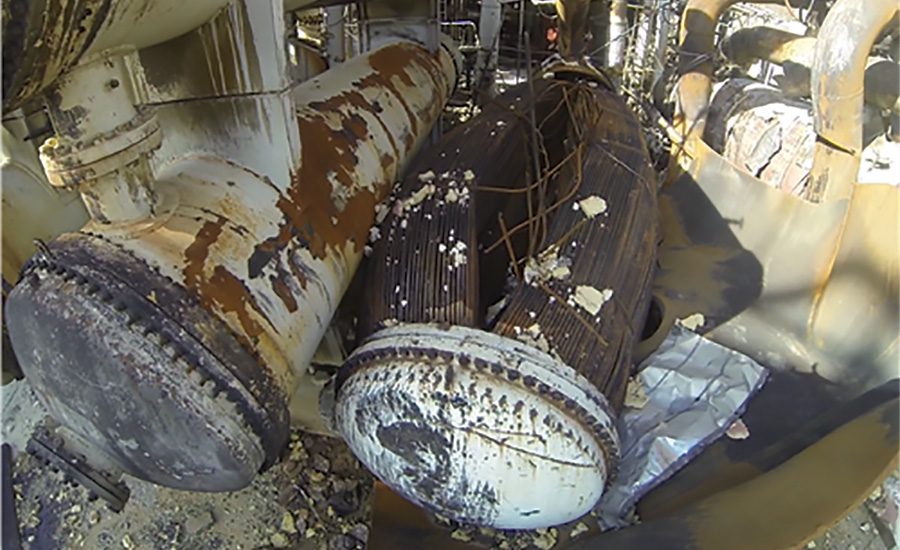 Pressure surges or shock waves — caused by the sudden, rapid acceleration or deceleration of a liquid — can cause steam or water hammer.

Where possible, heat exchangers should not be placed near equipment such as air compressors or mechanical chillers because excessive vibrations from these machines can cause tube failures. Signs of heat exchanger failure due to vibration can be seen in the form of fatigue stress cracks or erosion of the tubing at the point of contact with baffles.

To resolve shell-side flow-induced vibration requires a complicated design analysis best supported by the heat exchanger manufacturer. Avoiding excessive shell-side fluid velocities can prevent damaging vibrations in the tubes and prevent a cutting action at support points with baffles. Velocity-induced vibrations also can cause fatigue failures by work hardening the tubing at baffle contact points or in U-bend areas until a fatigue crack appears.

Accumulated stresses associated with repeated thermal cycling or expansion can result in tube failure. Tubes using U-tube type construction are best suited for thermal expansion and cycling because the bundle can expand and contract within the shell. With a straight-tube fixed-tubesheet design, the tubing is fixed between the two tubesheets and cannot expand or contract.

This problem is greatly aggravated as the temperature difference across the length of the tube increases. The temperature difference causes tube flexing, which produces a stress that acts additively until the tensile strength of the material is exceeded. Then, the tube cracks. The crack usually runs radially around the tube, and it often results in a total break. In other cases, the crack occurs halfway through the tube and runs longitudinally along it. Failures due to thermal expansion of fluids are most common in steam-heated exchangers.

To help prevent failure due to thermal expansion and cycling, relief valves can be installed in the heated fluid system. It also is advisable to provide some means to absorb fluid expansion. For example, installing a tank in the heated fluid system prevents periodic discharge of the relief valves. (Periodic valve discharge should be avoided if possible because it results in a loss of system fluid and places an undue burden on the valve.) These devices are installed between the heat exchanger and any shut-off or control valves.

Freezeup failure can occur in any heat exchanger in which temperatures drop below the freezing point of fluid in the unit. Typical freeze-up causes are:

Ensuring the heat exchanger is operated at the optimal operating temperature is the main solution for avoiding freezeup, together with ensuring chiller settings are set and working appropriately. Also, attention should be paid during the winter period to ensuring the equipment is drained adequately ahead of it being shut down.

This type of corrosion is characterized by a relatively uniform attack over the tube, tubesheet or shell. There may be no evidence that corrosion is taking place.

Selecting a material with adequate corrosion resistance for its environment, along with using proper treatment chemicals, maximizes heat exchanger life.

Localized pitting frequently occurs in both ferrous and nonferrous metals. It results from the electrochemical potential set up by differences in oxygen concentration inside and outside of the pit. Frequently, this is referred to as a concentration cell. The oxygen-starved pit acts as an anode, and the unprotected metal surface serves as a cathode. A small number of pits may be present; however, any pit can cause a heat exchanger failure.

Pitting corrosion is most likely to occur during shutdown periods when there is no flow and the environment is most suitable for the buildup of concentration cells. The susceptibility to pitting corrosion is further enhanced by scratches, dirt or scale deposits, surface defects, breaks in the protective scale layers, breaks in metal-surface films and material-grain boundary conditions. 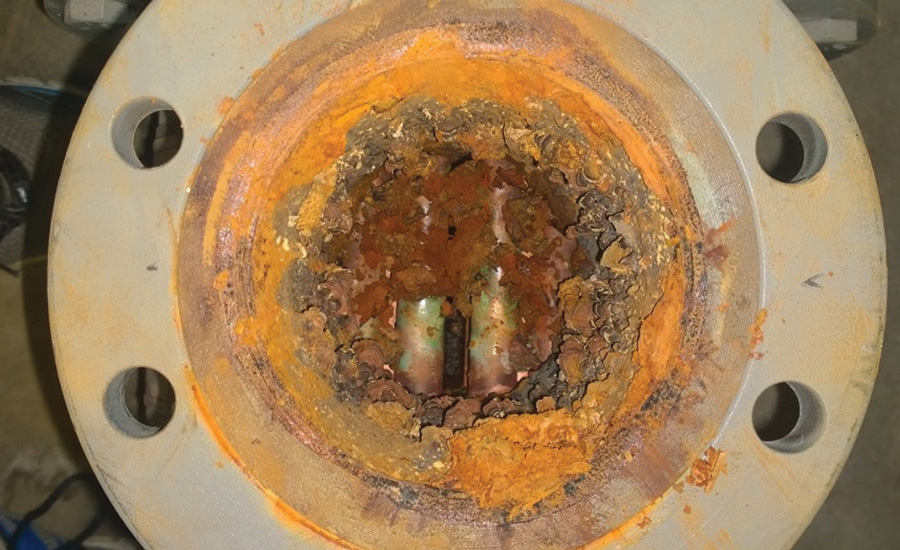 FIGURE 2. Corrosion is a common cause of heat exchanger failure in process applications. The mechanisms of corrosion-induced failure include pitting corrosion, galvanic corrosion and condensate grooving.

This form of corrosion attacks the material-grain boundaries in stressed areas. Heat exchanger tubes usually have both avoidable and unavoidable residual stresses. These stresses are the result of drawing or forming the tube during manufacture, forming U-bends or expanding the tubes into tubesheets. Failures from this corrosion take the form of fine cracks that follow lines of stress and material-grain boundaries.

Keeping tube-wall temperatures below 115°F (45°C) prevents stress corrosion cracking problems in applications with a chloride ion concentration up to 50 ppm. (Keep in mind, however, that the tube-wall temperature must be calculated with maximum — not average — fluid temperatures.) In relation to cracking caused by ammonia, copper-nickel alloys have good resistance to stress corrosion cracking. They should be used in applications where low concentrations of ammonia are expected. 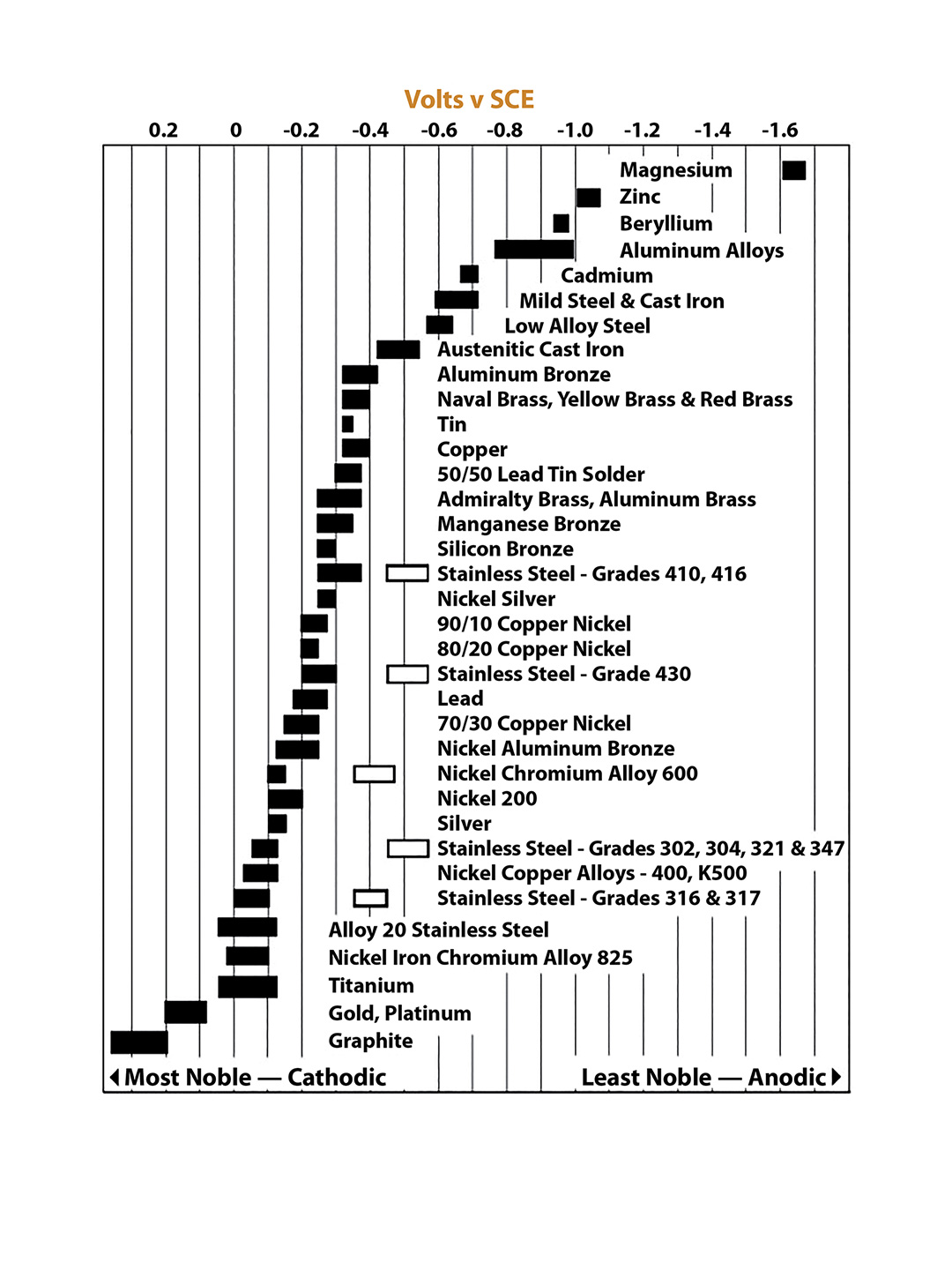 FIGURE 3. The galvanic chart shows the relative potential of materials to support this type of corrosion. Metals grouped together have fewer tendencies to produce galvanic corrosion. *Click the image to see a larger version.

Dezincification creates a porous surface in which the zinc is chemically removed from the alloy. Dezincification occurs in copper-zinc alloys (those containing less than 85 percent copper) when they are in contact with either stagnant solutions or water that has a high oxygen and carbon dioxide content. The effect tends to accelerate as temperature increases or pH decreases below 7.

Dezincification can be prevented using a brass with lower zinc content or a brass containing tin or arsenic to inhibit the chemical action. It also can be prevented by controlling the environment causing the problem, i.e., avoiding contact with stagnant solutions or water that has a high oxygen and carbon dioxide content.

Galvanic corrosion occurs when dissimilar metals are joined in the presence of an electrolyte such as acidic water. It usually produces a higher rate of reaction on the less noble metal, causing it to corrode quickly.

The galvanic chart shows the relative potential of materials to support this type of corrosion (figure 3). Metals grouped together have fewer tendencies to produce galvanic corrosion.

This type of corrosion originates in and around hidden and secluded areas such as between baffles and tubes, or under loose scale or dirt. A localized cell develops, and the resulting corrosion appears as a metal loss with local pits. This often gives the impression that erosion is taking place. Relatively stagnant conditions must exist for crevice corrosion to occur.

Crevice corrosion attacks often can be controlled by making sure that velocities are adequate to prevent stagnation or the accumulation of solids.

Condensate grooving occurs on the outside of steam-to-water heat exchanger tubes, particularly in the U-bend area. It is recognized by an irregular groove, or channel, cut in the tube as the condensate drains from the tubing in rivulets. A corrosion cell usually develops in the wetted area because of the electrical potential difference between the dry and wet areas. The condensate, which must be aggressive for grooving to occur, wears away the protective oxide film as it drains from the tubing.

Condensate grooving usually can be reduced through controlling condensate pH and dissolved gases, and through cleaning the tube bundle outside surface to remove oils that prevent uniform wetting.