A practical knowledge of the acid dewpoint and its effect on sulfur emissions can better enable process heater operators to reduce maintenance costs, lower emissions and improve combustion efficiency. This article reviews the key factors plant operators need to understand to achieve those benefits. It also describes how a portable acid dewpoint temperature monitor can provide a practical measurement of sulfuric acid in stack gases.

It is commonly known that sulfur dioxide (SO2) emissions from process plants contribute to acid rain, and that many sites must monitor or control such emissions. Problems associated with sulfur trioxide (SO3) and sulfuric acid (H2SO4) emissions, however, are less widely recognized. It also is less well known that sulfuric acid in stack gases contributes to serious and expensive maintenance problems.

When sulfur-containing fuels are burned, the sulfur is oxidized to SO2. If enough oxygen is available, some of that SO2 oxidizes further to become SO3. In most cases, the SO3 forms a small — but significant — fraction of the oxidized sulfur. Typically, this is a few percent of the total. Most solid and liquid fuels contain some sulfur, typically between 0.5 and 3 percent by weight.

If water is present, it may react with the SO3 to form H2SO4 in a reversible reaction. At low temperatures, below 92°F (200°C), all of the SO3 is present as H2SO4. Above 932°F (500°C), it is almost entirely free SO3. The equilibrium point also depends on the concentration of water vapor at a given temperature. More of the initial SO3 will be present as H2SO4 when the water concentration is high. 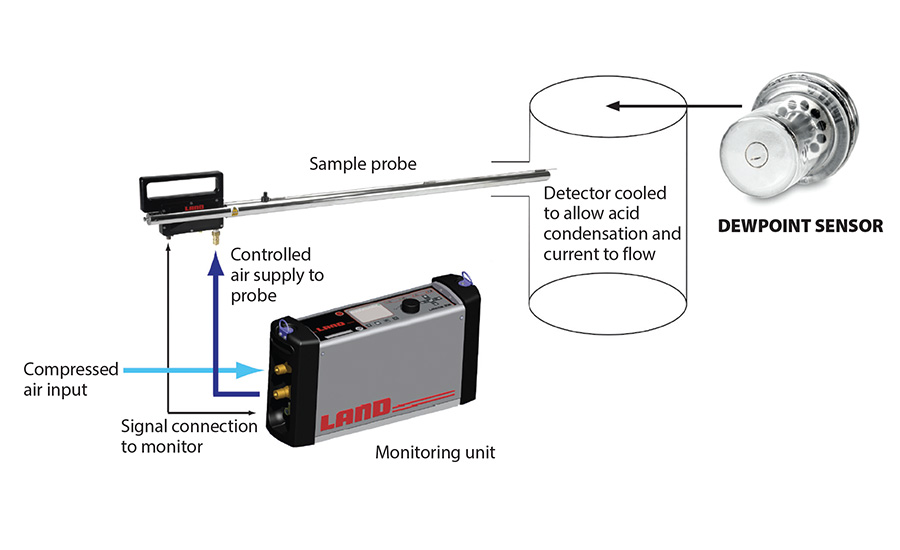 This diagram shows how the monitor works. This configuration is practical because it allows the operator to survey a number of different points on a plant, logging the data in real time, before downloading it to a PC for subsequent analysis.

Several factors affect the conversion of SO2 to SO3 and H2SO4. This conversion increases if the fuel contains substances such as vanadium, which acts as a catalyst encouraging the formation of SO3. Petroleum-based fuels typically contain more vanadium than coal, so the SO3 concentration is higher when burning oil.

SO3 also adsorbs onto fly ash. Ash generally is basic, and so the acidic SO3 binds easily to the surface, resulting in low levels of free SO3. The ash is removed from the gas stream by the precipitators or the baghouse along with the adsorbed SO3.

The presence of SO3 in stack gases can lead to undesirable consequences. Sulfuric acid condenses at temperatures well above 212°F (100°C), and sulfuric acid will be deposited on any exposed surface with a temperature below the dewpoint. Hot sulfuric acid in liquid form is highly reactive and can cause severe corrosion of heater surfaces.

If the gas temperature drops below the acid dewpoint, sulfuric acid aerosol is formed. The aerosol droplets are small, typically around 1 µm, so they scatter light effectively. If sulfuric acid is present in the gases at the stack exit, the condensing aerosol forms a so-called “blue plume.” Once formed, such plumes are persistent and can negatively impact visibility a long distance from the source. 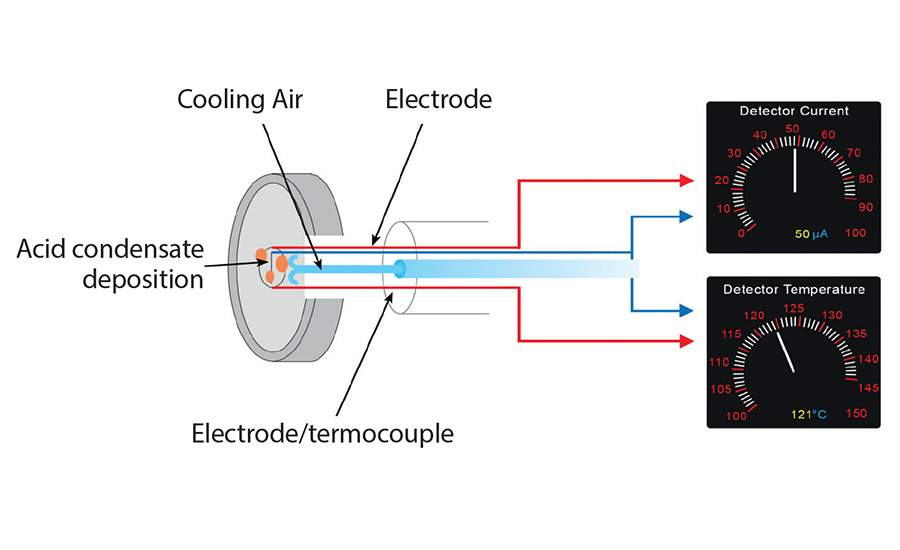 The thermocouple measures the surface temperature while the inside of the thimble is cooled by a flow of air. A sulfuric acid film forms on the surface of the sensor when it is cooled below the acid dewpoint. The acid is conductive so that the conductivity between the ring electrode and the thermocouple gives an indication of the film’s thickness. When the sensor is at the acid dewpoint temperature, the rates of evaporation and deposition are equal, so the film thickness and, hence, its conductivity are constant.

When particulate matter is allowed to build up in the ductwork, agglomerations of particles can form, and the SO3 adsorbs onto these particles, as previously noted. When such agglomerations become detached, they may be emitted from the stack as acid smuts — highly corrosive pieces of dust that attack the surfaces they land on, including nearby cars, homes and vegetation.

For plant operators, the most serious consequences occur when the gases drop below the dewpoint within the process. Corrosion is an inevitable consequence whenever hot sulfuric acid is deposited on a metal surface. Glass-coated surfaces are an option, but they are expensive to install. In general, it is better to maintain the temperature above the dewpoint.

This is no trivial matter because increasing the stack exit temperature decreases the thermal efficiency of the plant and increases fuel costs. Clearly, there is an optimum operating temperature — safely above the dewpoint but as close to it as practically can be arranged. Increasing the flue gas temperature by 10°F (5.5°C) typically will result in a 0.25 percent decrease in combustion efficiency. For this reason, a knowledge of acid dewpoint temperature is important for optimum combustion control.

A number of strategies can be used to minimize SO3 formation and related emissions. Wet scrubbers such as those used to remove SO2 tend to be ineffective in removing sulfuric acid aerosols because the droplets are too small to be entrained in the scrubber’s slurry.

One solution is to use fuel additives such as magnesium oxide (MgO) or magnesium hydroxide (MgOH). These react with sulfur in the combustion zone, forming solid salts that precipitate from the gas stream. Along with the removal of the fly ash, this is the principal mitigation strategy for both SO3 formation and sulfate aerosol emissions.

Another approach is to use a wet precipitator that effectively collects the sulfate aerosol. However, any strategy for dealing with SO3 and H2SO4 requires a method for measuring their concentration in stack gases.

The U.S. Environmental Protection Agency’s Method 8, Determination of Sulfuric Acid and Sulfuric Dioxide Emissions from Stationary Sources, has long been the method used. As a wet-chemical method, it is rather cumbersome and is not suited to rapid measurements.

As an alternative, an acid dewpoint temperature (ADT) sensor can be used effectively to monitor sulfuric acid concentration. The sensor consists of a precious-metal thermocouple and a ring electrode embedded in a glass thimble. The thermocouple measures the surface temperature while the inside of the thimble is cooled by a flow of air. A sulfuric acid film forms on the surface of the sensor when it is cooled below the acid dewpoint. The acid is conductive, so the conductivity between the ring electrode and the thermocouple gives an indication of the film’s thickness. When the sensor is at the acid dewpoint temperature, the rates of evaporation and deposition are equal, so the film thickness and, hence, its conductivity are constant. 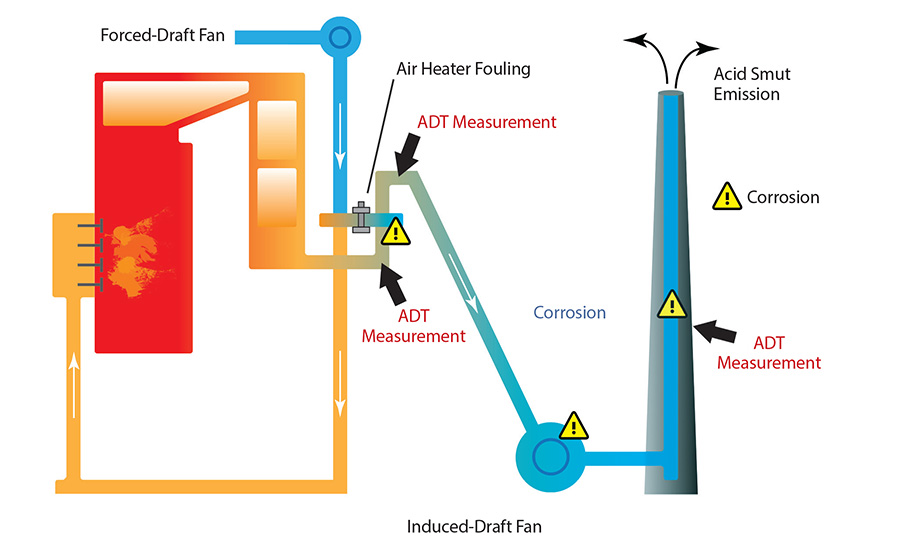 The first commercial ADT monitor based on this sensor design appeared in 1965. Over the years, although improvements in electronics and pneumatic controls have resulted in greater efficiency and usability, the measuring principle behind the analyzer has remained essentially the same.

One modern portable ADT monitor consists of a probe with a sensor mounted in the tip. A portable control unit includes an airflow regulator and electronics to measure the conductivity and thermocouple temperature. Datalogging and printing allow successive measurements to be stored for subsequent analysis. This configuration is practical because it allows the operator to survey a number of different points on a plant, logging the data in real time before downloading it to a PC for subsequent analysis.

It is important to note that dewpoint sensor cleanliness is essential. Particulate matter contaminating the face of the sensor will alter the conductivity measurement, making it impossible to determine when the dewpoint has been reached. With a portable analyzer, an operator can simply wipe the sensor after each measurement.

Are You Measuring the Correct Temperature?