When Controls Retrofits Make Sense for Your Boiler Room

The boiler room is one of the most important locations in many facilities. Without steam or hot water, many processes would not function: food would not be cooked, beer would not be brewed, paper products would not be produced, or paint would not be dried. Often, the boiler remains forgotten and neglected in its room in a basement or an adjacent building — until, that is, the steam or hot water is not delivered. As a result, many may be unaware of what it takes to keep an industrial process boiler running safely and efficiently.

Boilers are pressure vessels and, if not properly maintained or safely operated, can cause a catastrophic event, damaging equipment and harming plant personnel. To prevent this scenario, manufacturers of new systems have, for years, taken steps to monitor the burner flame — as well as the water level and pressure within the boiler — to help avoid such a situation. Yet, the burner controls on existing boilers may have been out of production for years, upgraded by newer versions and technologies.

When a burner control is obsolete and no longer supported by its manufacturer, it creates several issues for the system owner — and for the people hired to maintain the equipment. Finding replacement parts for controls systems that no longer exist can be frustrating. It can lead to additional costs, and some boiler owner/operators may feel forced to take chances on used or repaired controls. None of these scenarios are ideal.

This article discusses how retrofitting boiler controls can address these limitations.

An important reason for considering a burner controls retrofit on an existing system would be due to the failure of components that are no longer available for purchase. As technology changes and advances, controls companies must adapt. When they develop new control platforms, the older systems become obsolete. Generally, the manufacturer establishes a “sunset date” — a date, sometime in the future, when the product will no longer be available for purchase or repair. Alternatively, a company may produce limited quantities of a legacy control for a longer period of time. Decreasing demand over time may drive price increases to a point where the replacement control becomes cost prohibitive.

Having a burner control or flame safeguard that is no longer in production can be frustrating to an end user when a component fails. Even though these controls follow stringent safety codes for operation to protect against catastrophic failures, there are companies that rebuild old controls and sell them to the general public.

A problem with rebuilt controls is that the governing bodies in charge of setting codes and standards on burner controls tend to be strict on the use of rebuilt flame safeguards. For instance, rebuilt flame safeguards are not allowed per CSD-1 and others. Also, rebuilt controls rarely meet the industry safety standards set by UL, FM, CSD and AGA. For these reasons, it is important to establish that the controls purchased for a retrofit application are new and approved by the governing bodies. 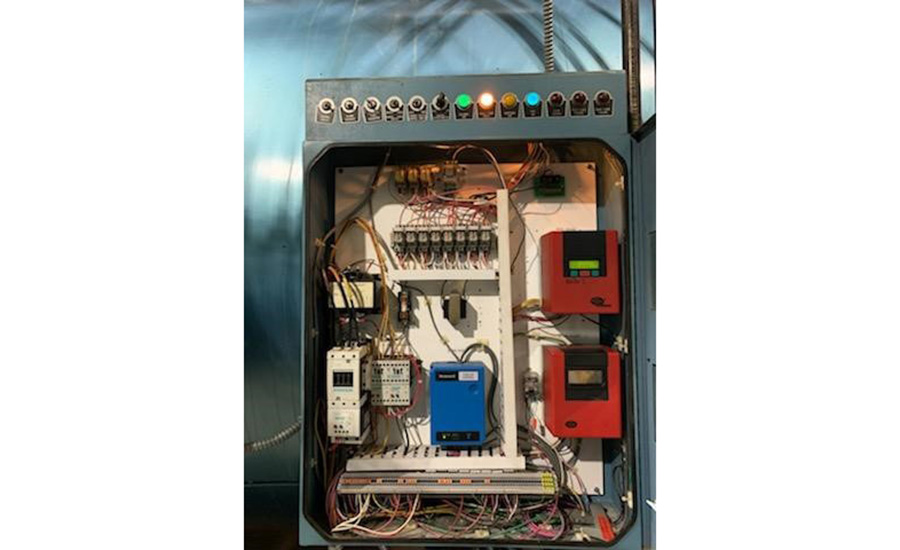 The controls system on this existing control panel is obsolete.

Combustion efficiency is another reason to pursue a controls retrofit. The equipment may still be in good shape, but the controls platform in use may lend itself to subpar efficiency due to the use of a linkage tying the air and fuel together. This causes issues throughout the firing rate of a burner because the air and fuel are directly affected by each other when modulating through the firing rate of the burner.

With a retrofit, the linkage system can be removed, and the system upgraded to a parallel-positioning system that allows the air and fuel to move independently of each other. The actuators used for parallel positioning have a tighter, more repeatable tolerance when modulating through the firing rate. Having better control over the ratio between fuel and air allows for a higher efficiency and relates directly to fuel and energy savings. In some instances, upgrading to parallel-positioning controls can also lower emissions, helping reduce the end user’s carbon footprint. 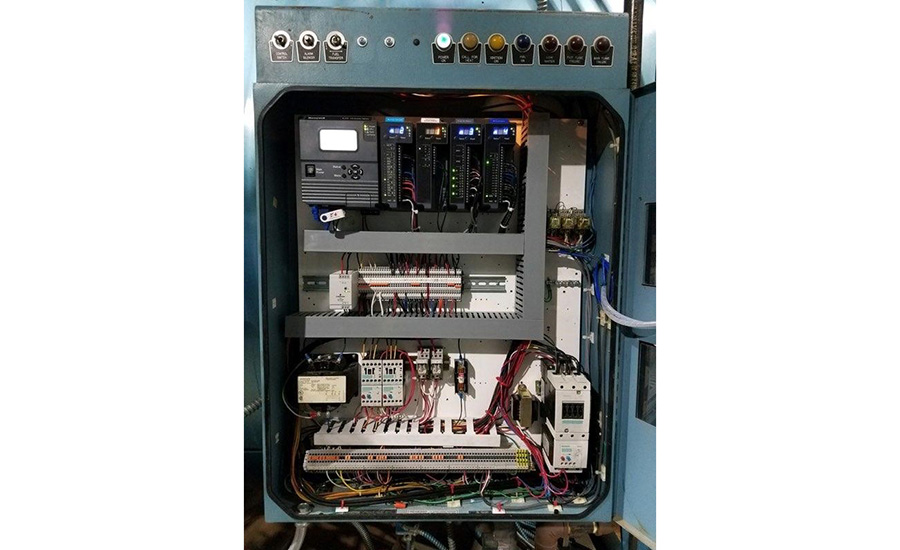 This existing control panel received a retrofit with a new controls system.

Controls retrofits also can be driven by the desire — or need — to monitor the equipment remotely, or to gather data from the boiler room. A fully integrated control system based on programmable logic controllers (PLCs) offers centralized data collection and a control hub for the boiler room. From monitoring the flame signal to controlling the level in the deaerator, these boiler/burner-specific PLCs introduce flexibility into the operation of a boiler room. PLCs allow customized boiler room solutions. This is valuable because each end user’s requirements may differ from the next.

When discussing integrated boiler room controls, it is important to examine each aspect of operation and piece of equipment, and the manner in which all components tie together. The data collected can be used to help prevent accidents and allow the system to run more efficiently. It also can provide a better understanding of how the boiler room affects the rest of the facility. As the world changes and adapts to pandemics and other circumstances, having the ability to remotely monitor the whole process is a great reason for a controls retrofit.

Other varieties of retrofits are component based. One example is a variable-speed drive (VSD). Adding a VSD to an existing burner control for a blower motor can help control the amount and velocity of air allowed into the burner for combustion. It also can reduce the amount of electricity used by the blower motor. This, in conjunction with fuel savings from a parallel-positioning system, may provide significant payback for the end user and prolong the life of the equipment.

Adding sensors and meters to an existing controls platform allows for an enhanced view of equipment health, efficiency and long-term maintenance trends. Retrofitting a temperature probe in the flue stack of a boiler can help track the internal health of a boiler and burner over time. A temperature increase during normal operation, over a period of time, may indicate a water quality issue or rich combustion conditions.

Flow meters added to a system allow users to monitor other aspects of the boiler room and equipment. Comparing a steam flow meter to the water meter on the makeup water line may help calculate the amount of condensate returned to a boiler room. Trending this type of information over time may show a possible problem with the steam traps or devices elsewhere. The ability to look at other parts of the process equipment helps pinpoint problems more rapidly and can increase the overall equipment longevity. 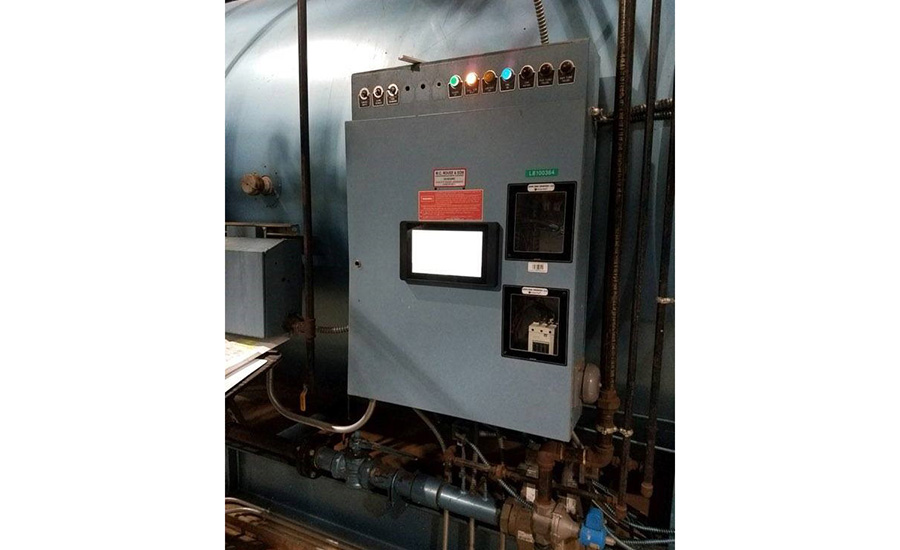 Controls retrofits can improve the user experience via the use of interactive touchscreens that allow users to access to visual real-time and historical data in easy-to-interpret graphs or logs.

Controls retrofits also can improve the user experience due to the use of human/machine interface (HMI) technology. Instead of standard LCD displays, interactive touchscreens allow users access to visual real-time and historical data in easy-to-interpret graphs or logs. This may simplify the operation of the controls system. Colorful custom graphics can be incorporated in the boiler room. The touchscreen helps tie the retrofit controls together with an interface that mimics the smartphone or tablet most of us carry in our pocket.

In conclusion, a control system upgrade is a viable solution to replace obsolete or outdated controls. In addition to eliminating the challenges of finding replacement control components, the new system can:

Lee Duncan is a controls sales manager with Power Flame Inc., an Astec Industries Co. The Parsons, Kan.-based company can be reached at 620-421-0480.

10 Tips for Upgrading Your Boiler Room

10 Considerations When Choosing a Boiler-Bypass System

Weighing Your Options for Industrial Boilers