Pilot testing demonstrates technologies that companies can use to meet their pollution control needs.

Wet electrostatic precipitators (WESPs) remove particulate — including extremely small, submicron particulate — from a process airstream. Typically, these airstreams are at near-saturated conditions or contain tacky substances that would cause issues with other particulate-control devices.

Challenges with operating a WESP include an inability to keep internal components clean, poor access for maintenance and the time and expense of installing large WESP structures. To minimize these drawbacks, and to take advantage of the potential for performance improvement with higher voltage power supplies, an alternative design was developed.

In the redesigned system, the process gas enters the WESP modules at the bottom. A compact inlet assembly removes large particulate, distributes the flow and enables water shutoff. The process gas then flows through a hexagonal tube bundle that contains high voltage electrodes, where most of the particulate removal occurs. The gas then passes through the outlet plenum and is ducted either to a stack or downstream equipment. The system is elevated, allowing gravity discharge of any collected water and providing a location for a recirculating water system if one is required for the application.

In this article, five design components will be explored in greater detail: 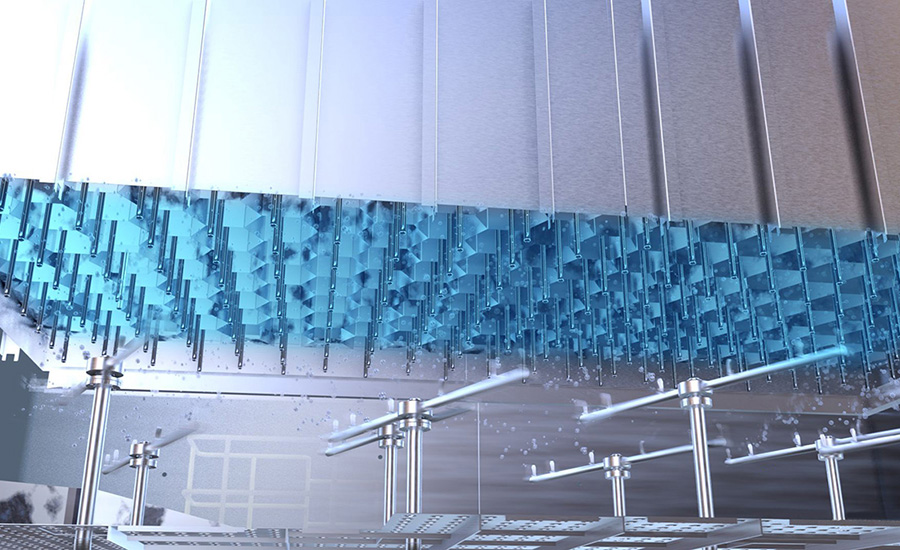 FIGURE 1. A rotary spray system that utilizes the hydraulic force of water to drive the system movement was developed. Photos credit: Dürr Megtec


WESP Cleaning. In many WESP applications, the particulate to be removed from the process airstream has low solubility in water and strong adhesive properties. These characteristics make it difficult to dislodge the particulate from the WESP itself. Many cleaning systems cannot remove this material without chemical additions.

To improve cleaning, an apparatus, designed with full-scale tubes, was used to test different spray nozzles and tube geometries. Testing quickly showed that tube geometry — round, hexagonal or square — had minimal impact on cleaning effectiveness. Further testing showed that, even with heavy liquid coverage of a tube, solid material stuck to the tube surface was not readily removed. The only modification that improved cleaning was concentrating a high volume of water in a small area.

It is not practical to wash the entire WESP with a high volume of water using stationary sprays; therefore, moving spray systems were investigated. The goal of improvement focused on designing a system that operated with minimal maintenance in a dirty industrial environment. After many iterations, a rotary spray system that utilizes the hydraulic force of water to drive the system movement was developed (figure 1). Increasing the water volumes was made possible by using recirculating water instead of fresh water. Because most of the material being removed becomes increasingly soluble as temperature increases, warmer recirculating water provides benefits. Initially, there was concern about the dirty water plugging the system, but free-passage nozzle orifices and a self-flushing bearing design proved to be dirt tolerant in field testing.

The design can provide end users with a means to minimize performance degradation and the manual cleaning associated with dirt buildup in the WESP over time. 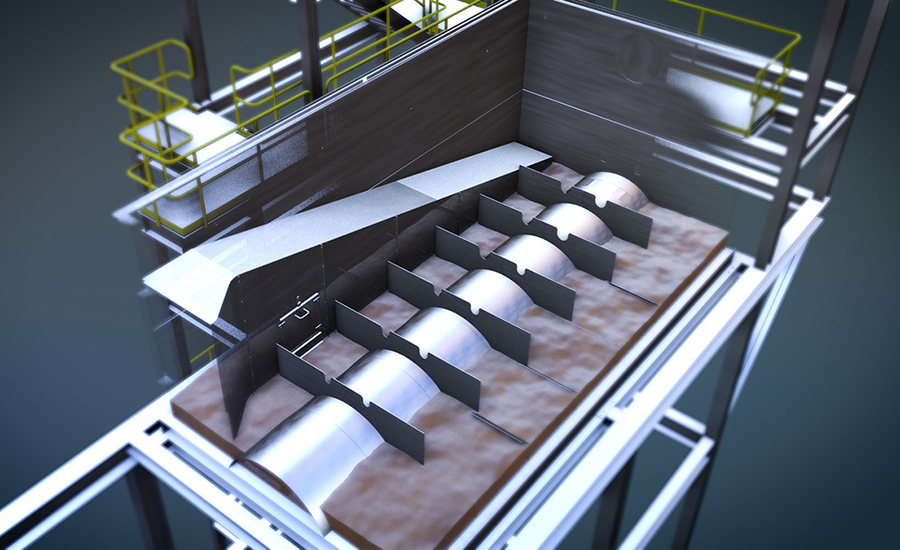 FIGURE 2. The water seal design allows offline cleaning to be accomplished on systems with more than one module. The water seal works on the same principle as a pipe trap in a drain. Photos credit: Dürr Megtec


Water Shutoff. Almost all WESPs are designed to clean while process gas is flowing. Process gas is essentially untreated during this time, resulting in high emissions. Further, the airflow can entrain some of the water and dirt to be removed and allow it to escape the precipitator.

By cleaning offline, all airflow is directed through the operating WESP modules for treatment. No airflow in the module being cleaned eliminates entrainment concerns. This combination improves the efficiency of the WESP during cleaning and allows a longer, effective cleaning to be performed.

The water seal design allows offline cleaning to be accomplished on systems with more than one module (figure 2). The water seal works on the same principle as a pipe trap in a drain. The bottom of the wet electrostatic precipitator is filled slightly above a vertical baffle under which the air flows during normal operation. Once the water is above the baffle, air pressure cannot move the water. Instead, the air is redirected to other modules. Material removed in the cleaning process is deposited in the water used to maintain the seal. This enables it to be flushed out of the wet electrostatic precipitator when the water seal is drained and process flow resumes.

Particulate Removal Performance. Because particulate removal is the primary job of the WESP, an efficient design is important. Many factors were analyzed and considered before three features were added to the design.

The first was the use of a higher voltage power supply. Once particles are charged with electrons, the voltage field provides the force to move these particles to the collecting surfaces. The speed at which these particles are moved is approximately proportional to the square of this voltage, so the increase provides a performance improvement. It also allows larger collecting tubes to be used, reducing material costs.

The second involved optimizing the design of the electrode and the electrode-to-collecting-tube geometry. Many electrode designs and electrode/collecting tube geometries were tested. In addition to the typical voltage-to-current relationship for each electrode/tube geometry, an analysis of the current distribution within the tube was conducted. Insights gained during the analysis were applied to the redesigned WESP to optimize the efficiency of the power input.

The third was a high area trap (HAT), a proprietary addition. The high area trap was developed to improve performance while maintaining tube length at a readily shippable height and to provide increased maintenance access. 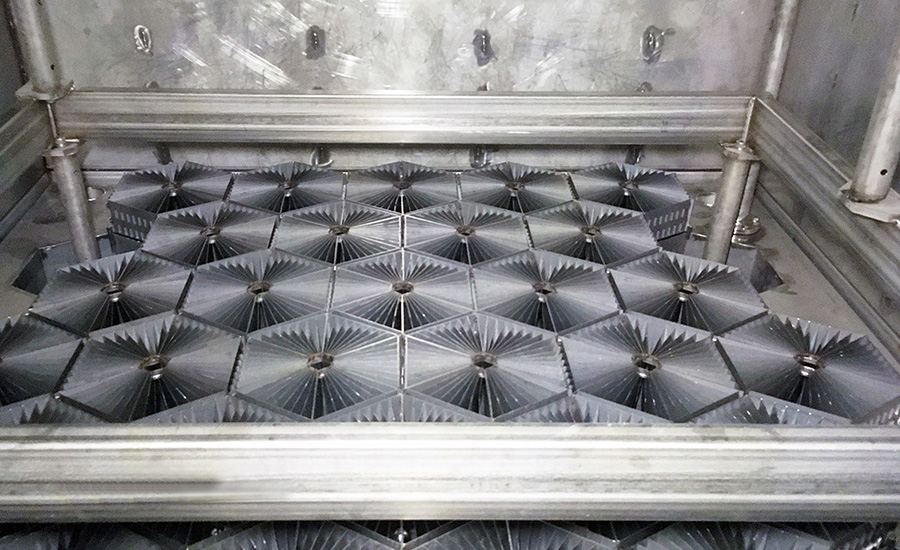 
The principle of the high area trap hearkens back to traditional wet and dry electrostatic precipitator designs, which initially charged particles and then captured them downstream. The high area trap is mounted on top of the collecting tube (figure 3). The 6" high device has the equivalent surface area of several feet of collecting tube. The small gaps also reduce the distance a particle must travel to reach a collecting surface. So, while the electrode ends below the high area trap, its proximity provides a strong electrical field at the entrance to the trap, which drives particles to the collection surfaces.

The high area trap is mounted on the clean side of the process. Because more than 90 percent of the particulate has already been captured at this point, the small amount of particulate that the high area trap collects is readily removed by the cleaning system. This prevents trap plugging. 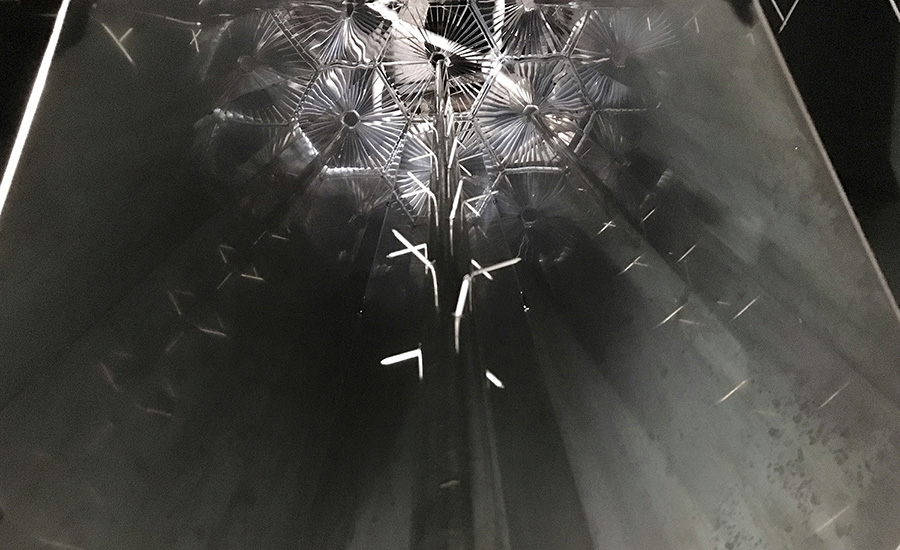 The improved cleaning system restores the WESP tubes to a bare-metal condition and works in a repeatable manner. Photos credit: Dürr Megtec


Maintenance Access. The high area trap provides clear access to the top of the precipitator tubes. The number of stabilizing beams is reduced, which means technicians do not have to step over high voltage grid members. The stable footing reduces the trip hazard found in most tubular wet electrostatic precipitator designs. This simplifies internal inspections and alignment checks.

Modular Fabrication. With traditional designs, large gas flows and the need to minimize equipment and shipping costs lead suppliers to ship WESPs in many pieces that are erected in the field. These designs require considerable field installation time at a high cost.

The redesigned WESP is modular. Each module includes three components: inlet plenum, tube bundle and outlet plenum. Each is shipped assembled in the orientation in which it is installed. Connections between the components are bolted, so field welding is not required. Also, all electrodes are installed and aligned within the tube bundle before shipment. The modular approach reduces the flange-to-flange installation time by approximately 75 percent. 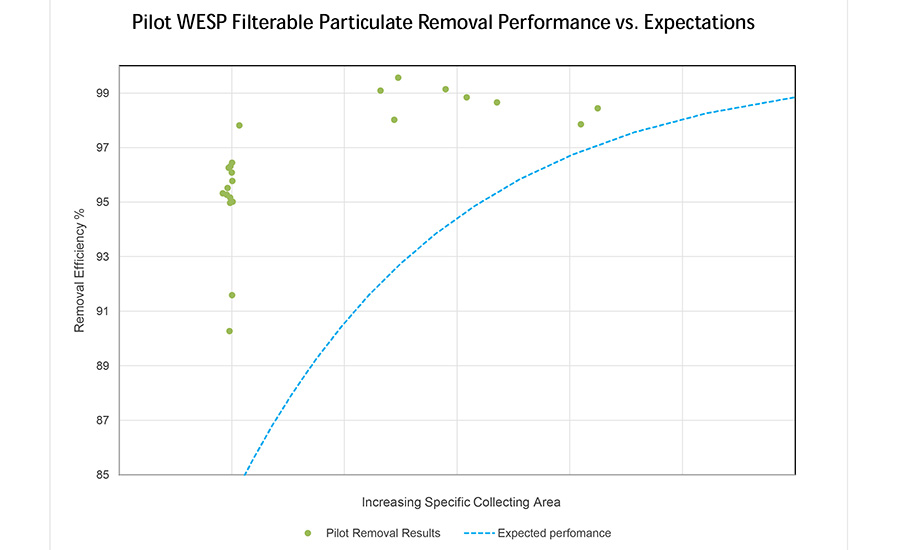 Pilot testing validated the long-term operability of the WESP features that were added. Performance test results are shown. (Click on the table to enlarge.)

In order to prove the design, a large pilot system was built. The pilot unit treats process flows up to 25,000 actual cubic feet per minute (ACFM). It was installed on a dryer system at an oriented-strand board (OSB) plant, which produces a high concentration of sticky, tarlike particulate — one of the most difficult to treat.

The pilot WESP was tested over an eight-month period. The testing showed the water shutoff system worked as designed. The high area traps were easy to clean and enhanced maintenance access. The cleaning system components all functioned as intended and were optimized, with some minor modifications, to the cleaning sequence. Recirculating water from the existing WESP onsite was used exclusively. It operated without any plugging or measurable pressure drop increase in the cleaning system. In addition, extended tests were performed with the cleaning system. They demonstrated its ability to get the WESP tubes back to a bare-metal condition in a repeatable manner.

The pilot operation concluded with an extensive battery of performance testing. Eight test conditions and a total of 22 individual tests were conducted. Under each condition, the removal efficiency of the WESP exceeded expectations, typically by wide margins. The performance testing also showed that the high area traps contributed to increased efficiency. The pilot testing effort provided great confidence in the long-term operability and performance of the upgraded design features.

After pilot testing was concluded and fully evaluated, the design of the product was finalized, incorporating the information obtained from the pilot project.

Jeff Rudolph is the process engineering manager at Dürr Megtec. The De Pere, Wis.-based company can be reached at 920-336-5715 or visit durr-megtec.com.