Many of the world’s industries have been recovering heat from exhaust gases for decades. For instance, in both metal and plastics processing, producers often recover heat from flue gases emitted from the production processes. The recovered heat can be reused or converted into electrical energy or steam.

Yet, some of these same industries may be overlooking another opportunity for heat recovery: High temperature bulk-solid materials remain a large and mostly untapped source of energy for cogeneration, or the conversion of waste heat into useful process heat or electricity. Cogeneration can be realized through the combined use of moving-bed heat exchange technology (MBHE) and the organic Rankine cycle (ORC) process. 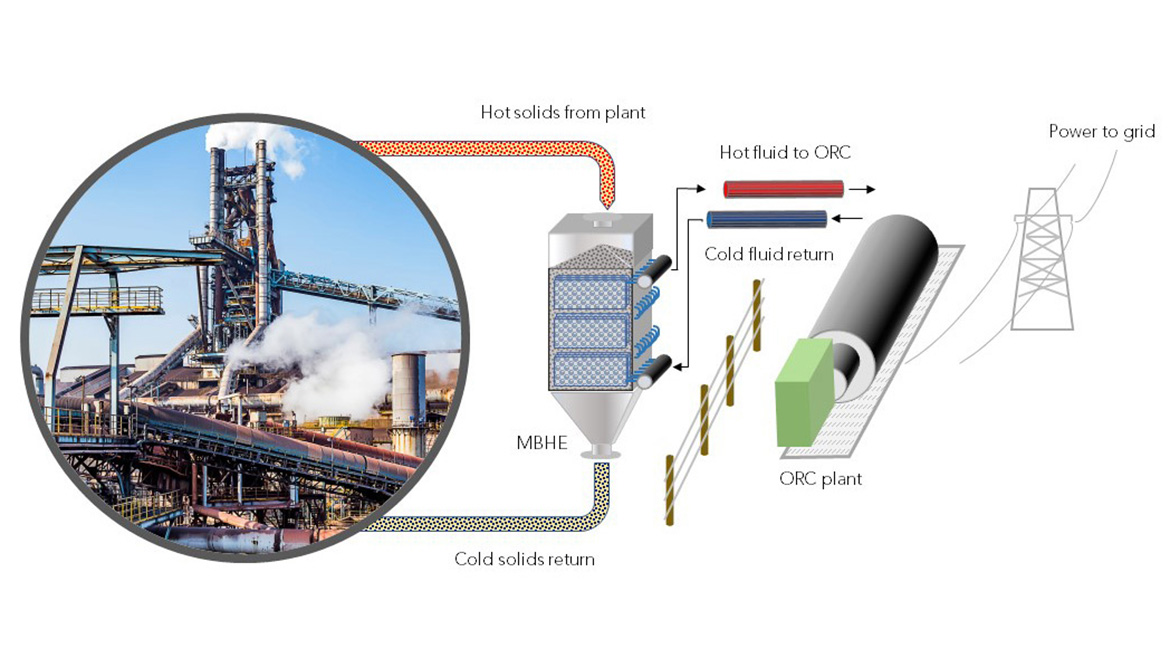 In many industries, hot solids at temperatures ranging from 932 to 1472°F (500 to 800°C) are left to air cool or be water quenched. For example, slag — a byproduct from the smelting process — typically is quenched (cooled) with water as it exits the furnace. In total, air cooling and water quenching represent millions of gigajoules of energy that dissipates as vapor into the environment every year (as well as inefficient water usage).

Realizing the energy potential within these hot materials via heat recovery can reduce the overall energy consumption within a facility while also improving water stewardship. Ideally, there is a use (elsewhere in the plant) for that otherwise wasted thermal energy. For example, recovered thermal energy could be used to preheat combustion air. If the air can be heated to between 392 and 752°F (200 and 400°C), then producers are going to see an immediate, significant reduction in energy use. If the combustion air is already preheated to 572°F (300°C), then less fuel will need to be supplied to the burner.

If there is not an obvious need for hot air, an opportunity to tie in with an ORC process exists. This allows producers to convert that otherwise wasted thermal energy into electrical power.

ORC technology has been around for decades. Typically, it has been used to convert low temperature heat sources into mechanical energy that then is converted into electricity. Because it operates under a lower operating temperature and pressure than in traditional steam plants, ORC’s primary benefit is its ability to recover waste heat that is normally inaccessible to the traditional steam Rankine cycle.

More recently, ORC technology has been used successfully in geothermal applications to convert an organic working fluid to steam, which then expands through a turbine to generate electricity. Yet, it has never been combined with heat recovery from a hot bulk-solid stream. 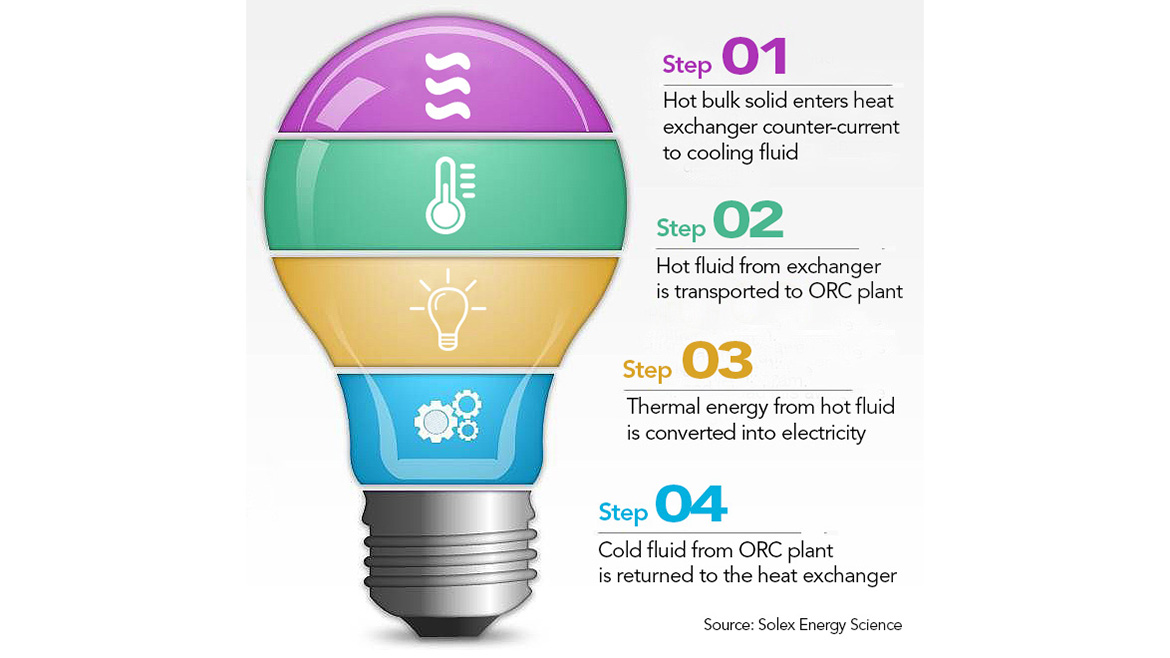 The heat energy in hot bulk solids can be converted into energy through a series of steps. Photos credit: Solex Energy Science (Click on the image to enlarge.)

At a high level, here is how cogeneration can be realized using moving-bed heat exchange technology and the organic Rankine cycle process.

A high temperature solid goes into the MBHE while a relatively cold working fluid — one example would be a thermal oil at around 300°F (150°C) — is used to indirectly cool the solids. A relatively hot (480°F [250°C]) working fluid then exits the heat exchanger and is piped to an ORC plant, which takes the energy out of the 482°F fluid and returns it at 300°F, producing electricity.

As a result of this process, producers can generate electricity to offset electrical demand. Alternatively, producers can feed it into the grid and generate a revenue stream. In many cases, neither the owner of the energy source nor the facility with the cooling demand needs to be the operator of the ORC plant. Instead, the thermal energy can go “over the fence” to the ORC plant financed and operated by an independent provider on a contractual basis.

At a more detailed level, the heat exchange in a moving-bed heat exchanger is realized by conduction across the surface of a series of plates or tubes. As the granular solids flow by gravity through the unit, there is no contact between the solids and the working fluid.

In an MBHE with a plate configuration, the working fluid can, in principle, include any heat transfer media, including water, thermal oil and steam. For high temperature bulk-solid streams, that fluid tends to be thermal oil, which has the advantage that the vapor pressure at a given temperature is lower than water. The MBHE does not include any moving parts aside from the discharge device. This provides uniform mass flow and, as such, consistent heating or cooling of the solids.

In addition to plates, moving-bed heat exchangers can use vertically or horizontally oriented tubes to enable conduction heat transfer between the flowing solids and the working fluid. 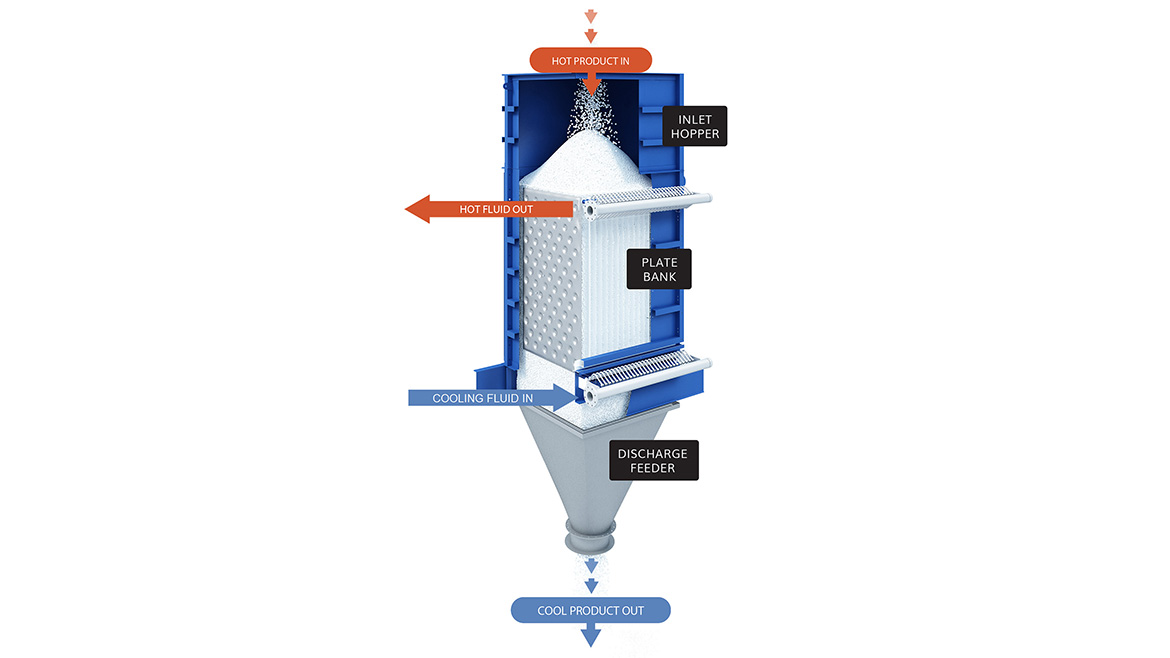 The heat exchange in a moving-bed heat exchanger is realized by conduction across the surface of a series of plates. As the granular solids flow by gravity through the unit, a working fluid flows counter-currently within the hollow plates. A discharge device provides uniform mass flow and, as such, consistent heating or cooling of the solids. Photos credit: Solex Energy Science (Click on the image to enlarge.)

The most obvious benefit to generating electricity from high temperature bulk solids is the opportunity to reduce overall energy consumption by converting waste heat into usable process heat. Yet, in light of the rapid decarbonization taking place in the global economy, another benefit may be present. Many jurisdictions are taking either a carrot (subsidies) or stick (carbon levies) approach to encourage environmental change. Reduced energy consumption — and even reduced water consumption if the bulk solids were previously being water quenched — plays into these opportunities.

Tied to this is the role that environmental, social and governance (ESG) principles are playing in key decisions being made by consumers and investors. A recent study released by PwC found 65 percent of investors factored in ESG issues when managing investment risks.[1,2] Meanwhile, a Bank of America survey reported that 92 percent of Gen Z consumers would switch to a brand that supports ESG issues versus one that does not.[3] Consumers and investors today are demanding higher standards of sustainability from companies. Meeting this need can be at least partly solved through cogeneration.

Another benefit is that often, producers can achieve a realistic payback period. Both ORC and MBHE are proven technologies with decades of real-world applications in various industries. Having the ORC side located “across the fence” means producers do not have to assume the capital and operational costs and risks associated with having to operate a power plant.

There are points to consider before proceeding, however. The process of using bulk solids to generate electricity will not be a fit for all industries. It is best suited for industries where a large amount of solid granular product is available with temperatures between 752 and 1,472°F (400 and 800°C). Industries most likely to fit that description will have solids throughputs of at least 20 tonnes per hour, or cooling demands around 2.5 MW at the indicated temperature range. The iron and steel industry and slag granulation (dry slag), cement plants and the refractory industry are all prime examples that could benefit from MBHE-ORC integration.

In conclusion, hot bulk granular solids remain an untapped source of energy. In most heavy industrial applications, these solids are subject to rudimentary processes, allowing that energy to be lost to the atmosphere or additional energy used to cool these hot solids with water.

Wasting energy and, in some cases, supporting inefficient water stewardship practices is no longer being tolerated. Industries globally are being held to higher environmental, social and corporate governance standards than ever before.

By combining two well-established technologies in MBHE and ORC, producers have an opportunity to reduce overall energy consumption with low risk and a practical payback period. This risk can be further minimized with ORC technology potentially being financed and operated by an independent third party.

Neville Jordison is the CEO of Solex Energy Science. The Calgary, Alberta, Canada-based company can be reached at 403-254-3500 or visit solexenergy.ca.