Tips for Selecting an Infrared Heater

Switching to an infrared system operating at the proper wavelength can provide increased efficiency.

From glass manufacturing to textile production, companies utilize heat during their manufacturing processes. This heat often is supplied in the form of convection: a process that works on the easy-to-understand principle of using hot air to heat an object. Another commonly used method is infrared heating. It uses energy in the electromagnetic spectrum to directly provide heat to an object. The principles behind it are somewhat more complex.

Switching from a convection heating system to an infrared system operating at the proper wavelength often is desirable due to the increased efficiency and speed that can be achieved. Consider one example: A company was using a convection system to vulcanize a rubber product. The heating process time was 8 to 10 minutes. After switching to an infrared heating system, the company was able to reduce the heating process time to 3.5 minutes. Effectively, the company doubled its rate of production.

Infrared energy typically is defined as electromagnetic energy having a wavelength between 0.76 microns and 1 mm. When it comes to manufacturing processes, the useful range runs from about 0.76 to 6 microns; any infrared wavelength longer than 6 microns does not have much use in industry.

The useful range of infrared wavelengths is further commonly subdivided into three primary categories: short-, medium- and long-wave. Definitions vary for these categories, but generally, they are defined as: 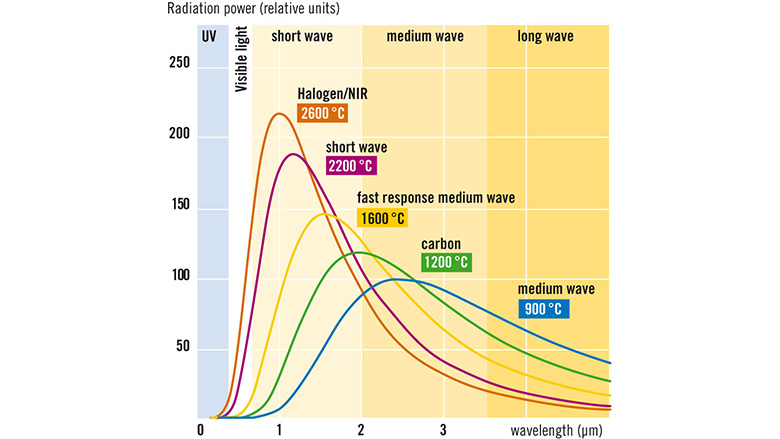 
It is important to note that a heater does not operate at one specific wavelength but rather over a range of wavelengths. The lines in figure 1 represent the relative power that a given heater outputs within the infrared spectrum. For example, we can see that a short-wave heater operating at 3992°F (2200°C) has a peak output of about 1.2 microns. It also has a relatively high power output over the entire 0.8 to 1.6 microns range. Understanding the peak outputs of a heater — and its overall output range — is useful when selecting a heater for an application.

Figure 1 also demonstrates why wavelengths longer than 6 microns do not have much use in industrial applications. As wavelength increases and the heater operating temperature decreases, relative power output also decreases. Heaters operating at peak wavelengths longer than 6 microns produce relatively low levels of power compared to their size; thus, they are impractical for industry. They either take too long to heat an object or take up too much space. 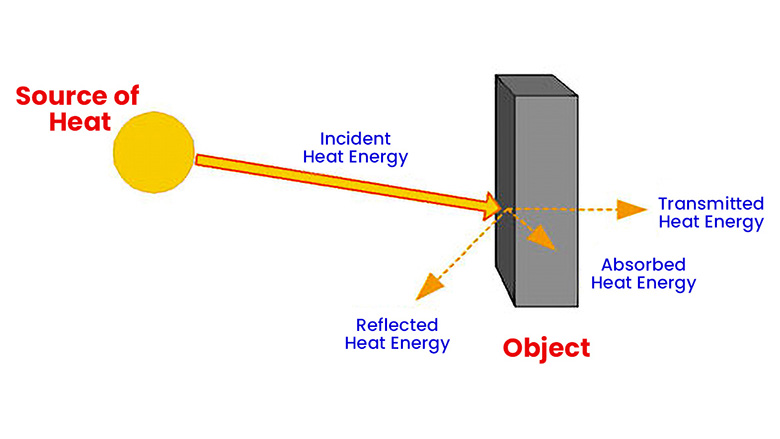 FIGURE 2. The interaction of heat energy with an object explains how when electromagnetic energy hits an object, one or more things occur: The energy is reflected, transmitted (passed through) or absorbed by the object. Credit: sensortips.com

When electromagnetic energy hits an object, three results are possible: The energy can be reflected, transmitted (passed through) or absorbed by the object.

In practice, all three of these results occur simultaneously (figure 2). For every material and every wavelength, the ratio of the possible outcomes varies. To find an effective wavelength to heat an object with infrared energy, it is necessary to perform product testing to identify the wavelengths at which absorption is maximized. Product testing will identify the most efficient heating; the maximum amount of energy will be absorbed into the object and used to heat it. 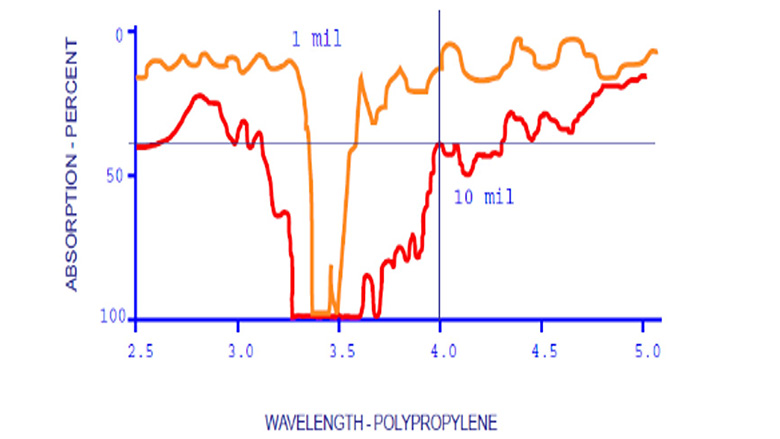 
There is another point that must be made when reviewing figure 3. The figure includes the absorption spectra for two different thicknesses of polypropylene: 1 mil and 10 mil. Despite being the same material, for the same wavelength, the thicker polypropylene absorbs a higher percentage of the energy that hits the material. If we look at the 4-microns wavelength, for instance, the 1-mil thickness absorbs approximately 10 percent of the energy, and the 10-mil thickness absorbs around 40 percent. This is because the 10-mil material can be thought of as the equivalent of ten layers of 1-mil material, with each layer absorbing 10 percent of the energy that passes through the previous layer. Thicker materials tend to be easier to heat with infrared because the range of wavelengths they absorb efficiently is larger.

The thickness of an object also is important when it comes to heating extremely thin materials and coatings. Consider this example: A company needed to dry a water-based coating that is 0.3-mil (7.6 microns) thick on a metal strip. The company had a 30'-long, medium-wave infrared dryer operating at a temperature that produced a peak at approximately 3 microns. Because the thickness of the coating was only slightly more than double the wavelength of the infrared energy, however, most of the energy did not interact with the coating. Instead, it passed through the coating to the metal strip underneath.

Most metals reflect a significant portion of energy with wavelengths longer than 1.6 microns, so a good deal of the energy in the process was not being absorbed. Switching to a short-wave infrared system operating at a higher effective temperature (and producing a peak around 1.2 microns) increased the amount of energy absorbed by both the coating and the metal strip underneath. The energy absorbed by the metal was transferred via conduction into the coating, further increasing the process efficiency.

In this example, the short-wave infrared dryer was 12' shorter yet able to dry the coating. The company also was able to speed up the line, increasing production while saving floor space.

Once product testing helps determine effective heating wavelengths, an appropriate infrared heater can be selected. To facilitate this discussion, consider another infrared absorption spectrum, this time for an application that requires a water-based coating to be heated.

Water has several wavelengths where it has good absorption; that said, peaks occur at 3 microns and 6 microns (figure 4). Wavelengths longer than 10 microns also have good absorption, but as noted earlier, 6 microns is the upper end of the useful range of industrial infrared heating. 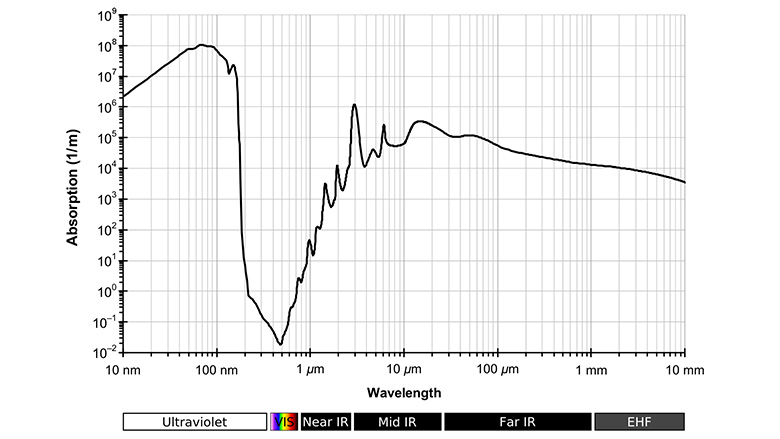 FIGURE 4. The infrared absorption spectrum of water shows that water has several wavelengths where it has good absorption. Credit: Kebes via Wikimedia Commons


By selecting the shortest wavelength possible — 3 microns in the case of water — the heater operates at shorter wavelengths and thereby operates at higher relative power levels. This means the heater can heat an object more quickly while using a smaller amount of space. Medium-wave heaters have a high relative output at 3 microns, so this wavelength heater will be selected in this example.

Figure 5 shows the output curve for a medium-wave quartz tube heater. The figure shows that a peak output wavelength of 3 microns roughly equates to 1,382°F (750°C) with an energy output around 25 W/in2. Such is a heater suited to the application. 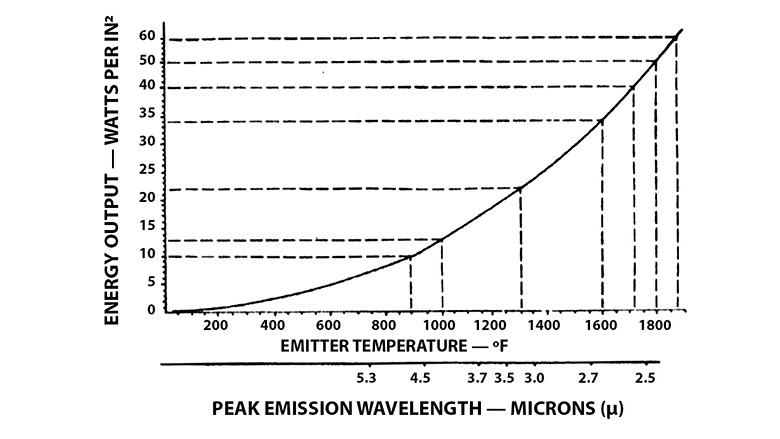 
Other Factors to Consider. Infrared heater lifespan is a factor of operating conditions, with higher operating temperatures equating to shorter lifespans. One way to help mitigate this is to select a heater that is slightly overdesigned for the application.

Going back to the water-based coating application, recall that a medium-wave quartz tube heater operating at 1382°F (750°C) and 25 w/in2 was recommended. If the heater purchased has a maximum operating capacity of 1517°F (825°C) and 30 W/in2, it will likely last longer because it would not be operating at 100 percent of its capability.

At times, the object being heated is constructed of a non-uniform material. In those cases, it may be necessary to consider introducing air movement. For example, in an application that involves drying a temperature-sensitive material such as cloth or paper, the goal is to heat and remove water from the material while not damaging it with excessive heat. Introducing airflow into these applications helps to keep the base material from overheating while the water absorbs the infrared energy.

Another important consideration is the production environment. Does the process generate a lot of debris? Is it possible that material or debris could end up on the emitting surface of the heater? Are there obstructions between the heater installation location and the object to be heated? Unlike convection heating, where hot air is recirculated and reaches all areas in a chamber, infrared heating works on a line-of-sight basis. The infrared heater must be able to “see” what it is heating. Any obstructions between the heater and the target object, or debris on the heater emitting surface, will absorb the infrared energy and decrease system effectiveness. Depending on the type of infrared heater, some will be able to burn off any debris that lands on the emitting surface.

To help direct the energy to the correct location, some heaters have internal or external reflectors. External reflectors are not suited for a dirty environment because they will become obscured eventually and lose effectiveness. By contrast, internal reflectors do not require periodic maintenance or cleaning.

One final item to consider is how quickly the process requires the heaters to ramp up to temperature and cool down. In a high speed web-heating application moving hundreds of meters per minute, the ability to rapidly reach temperature setpoints is critical to avoiding kilometers of inadequately heated product. Stamped wire elements or quartz tube heaters are best in these settings. Conversely, for an application heating steel molds weighing hundreds of pounds with cycle times measured in minutes or hours, temperature stability and the ability to maintain setpoint without significant power usage is more important. A higher mass panel heater made from ceramic, metal or refractory materials might be best.

In conclusion, the methods in this article provide a way to identify the type of infrared heater suitable for an application. Every application has its challenges, however, and it is advised to consult with an infrared heater manufacturer to discuss their recommendations for a specific application. Many manufacturers have testing laboratories to run heater trials. Being armed with the knowledge above will help you evaluate any recommendations and test results that you receive.

Derek Burkholder is the vice president of sales and engineering with Casso-Solar Technologies LLC. The Nanuet, N.Y.-based company can be reached at 845-354-2010 or visit cassosolartechnologies.com.