Before plunging headfirst into myriad industrial heat tracing designs, products and applications, one must first have an understanding of the basics of heat loss.

This article deals with the basic principles of heat transfer and the calculations used for pipes and vessels. By understanding fundamental heat transfer concepts, you can use them used to arrive at a general formula that is used in heat loss calculations.

Figure 1 depicts a sectional view of a typical pipe system. It consists of the pipe, insulation, a weather barrier and gaps between each layer. If the pipe and its contents are warmer than the surrounding environment, heat will be transferred from the pipe to the air. If enough heat is transferred out of the pipe, the pipe contents may thicken or solidify, resulting in damage to pipes or pumping equipment.

Heat flows from one object to another in much the same way as water. Objects of unequal temperatures in a thermal system tend toward thermal equilibrium. The hotter object transfers some of its heat to the colder object until the objects are the same temperature. Heat can be transferred by way of conduction, convection and radiation.

Conduction. Conduction is defined as transferring heat or electricity through a conducting medium by way of direct contact. The rate of heat transfer is dependent upon how much resistance exists between objects of differing temperatures. In many cases, the transfer of heat from one medium to another is desired. Cooking is an everyday example of intended heat transfer. Also, most electronic components operate more efficiently if excess heat generated by the equipment is dissipated to a medium not adversely affected by the addition of heat.

In contrast, preserving heat in a system can be just as important as heat transfer. Keeping a pipe's contents above freezing in cold weather is a common practice of minimizing heat transfer.

where
L is the insulation thickness in inches,
k is thermal conductivity, (BTU)(in)/(ft2)(oF)(hr)

As the thickness (L) changes, it affects the R value, or thermal resistance of an insulation. K values are constants that are specific to the physical properties of a given material. They measure a material's ability to transfer heat. Some common K values, as measured at room temperature, of materials are 325.300 for steel, 2750.700 for copper, 0.250 for fiberglass and 0.167 for air.

Convection. Losses by convection can be seen to be negligible in a system without extensive calculations. In any piping system, small air gaps exist between the surface wall and insulation. The air gaps normally are slight -- less than one-tenth of an inch -- and prevent the flow of air which restricts convection. Although small air gaps do not affect heat loss via convection, their thermal resistive properties should be analyzed to determine the contribution to system heat loss through conduction.

To illustrate, suppose the pipe shown in figure 1 consists of 1" fiberglass insulation, and the air gap between the pipe wall and insulation is 0.05". Using the R value equation, you can calculate the resistance of the insulation and air gap. A ratio of the two resistances indicates that insulation has the greatest impact in overall thermal resistance, and minor imperfections in applying insulation are minimal. 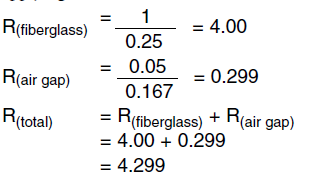 Radiation. Radiant heat loss occurs as a result of highly energized molecules transmitting heat by way of waves or particles. For significant heat loss to occur from radiation, the hotter surface must be well above ambient temperature -- much higher than what is observed in typical heat trace applications. Therefore, heat loss from radiation can be ignored.

Flat Surface Heat Loss Calculations. The term “heat loss” commonly refers to the heat transfer of an object to its ambient environment. This implies that the object in question -- a wall, for example -- is at a temperature above the ambient temperature (figure 2). Mathematically, the formula for calculating the heat loss of a system through conduction, expressed in BTU/hour is:

where
U is the conductance, BTU/(ft2)(oF)(hr)
A is the surface area of object, ft2
ΔT is the temperature difference (T1 -T2), oF

Conductance is the inverse of resistance, R, and can be expressed as U = 1/R or U = k/L. Therefore, another way to express the basic heat loss (Q) is:

BTUs and Watts: A Comparison. The equation above calculates the heat loss of an entire flat area in BTU/hr, but electricity is normally sold by kilowatt hours. Therefore, the equation needs a conversion factor to convert from BTU to watts. One watt equals 3.412 BTU. Modifying the equation yields a new formula:

Also, for pipe insulation, the outer area of insulation is greater than the inner area due to wrapping insulation around the cylindrical shape of a pipe. As a result, consideration must be made for this difference when calculating heat loss for pipes.

Because pipe heat loss is based on watts per linear foot rather than the entire pipe area, the mean insulation area for one linear foot of pipe is calculated (figure 3). The mean area (A) is the natural logarithm ratio of the outer and inner insulation diameters. To calculate pipe heat loss, the basic heat loss equation (Q) is rewritten as:

However, that basic equation is the heat loss for pipes due to conduction only. By adding 10 percent for convective and radiant losses, the final form of the basic heat loss formula is:

Primary heating is the process of adding heat to raise the temperature of a system, whereas supplemental heating is intended to only maintain the heat of a system at its current level. Typically, a higher density of heat must be added for primary heat as opposed to supplemental heating. As an analogous example, consider the amount of gasoline required to accelerate from 0 to 60 mph and maintain speed at 60 mph. The amount of fuel and energy required to accelerate is much greater than the amount of fuel needed to simply maintain speed.

Primary Heat. Primary heating is used to raise the temperature of a material or materials. The basic formula for calculating the amount of heat required for primary heating in watts/hour is:

Each material's weight and specific heat are multiplied then added together. The result is then multiplied by the temperature increase and finally converted to watts per hour.

An example will help illustrate the point. Suppose you want to raise a 4" steel pipe filled with water from 40oF (4.4oC) to 90oF (32oC) in one hour. Base the calculation on one foot of pipe. From various tables found in engineering handbooks, the information in table 1 is gathered and inserted in the basic heat equation.

If two hours were acceptable, the amount of primary heat to be supplied per linear foot on the pipe is 49.8 W/hr for two hours.

To illustrate, consider again the steel pipe example. Suppose you want to calculate the amount of heat loss, or supplemental heat, required to maintain the pipe and water at 90oF in a 40oF ambient using 1" of fiberglass insulation. The K factor for fiberglass is 0.25 BTU-in/hr-ft2-oF. The 4" pipe has an outside diameter of 4.5". We know that

Inserting the values from our example, we get: 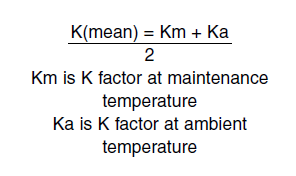 When designing a heat tracing system, keep in mind that designing for the lowest heat loss may not always obtain the best results. For example, polyurethane is a better insulator than fiberglass but has an upper service temperature limit of only 200oF. Cellular glass does not insulate as well as fiberglass but will not absorb liquids in the event of leaks. In most cases though, the decision of which insulation to use is best left to the plant specification.

Mark Crombie is vice president, heat trace, with Chromalox. The Pittsburgh-based company be reached at 412-967-3800 or visit www.chromalox.com.