This website requires certain cookies to work and uses other cookies to help you have the best experience. By visiting this website, certain cookies have already been set, which you may delete and block. By closing this message or continuing to use our site, you agree to the use of cookies. Visit our updated privacy and cookie policy to learn more.
Home » Investigation of Quantum Dots Leads to New Particles Formed by Molten Droplets
Hot News 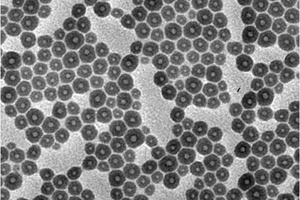 Serendipity — and the application of heat — proved to be key ingredients for nanoparticles discovered at Rice University, Houston. The “lava dot” particles were discovered accidentally when researchers stumbled upon a way of using molten droplets of metal salt to make hollow, coated versions of a nanotech staple called quantum dots.

“We’re exploring potential of using these particles as catalysts for hydrogen production, as chemical sensors and as components in solar cells, but the main point of this paper [recently published in Nanotechnology] is how we make these materials,” says co-author Michael Wong, professor of chemical and biomolecular engineering at Rice. “We came up with this ‘molten-droplet synthesis’ technique and found we can use the same process to make hollow nano-size particles out of several kinds of elements. The upshot is that this discovery is about a whole family of particles rather than one specific composition.”

Like their quantum dot cousins, Rice’s lava dots can be made of semiconductors like cadmium selenide and zinc sulfide. Wong’s lab has been working steadily to improve the synthesis of quantum dots for more than five years. In 2007, Wong’s team discovered a cleaner and cheaper way to synthesize four-legged quantum dots — particles smaller than a living cell that look like tiny versions of children’s jacks. These “nanojacks,” which are also called quantum tetrapods, can be used to harvest sunlight in a new kind of solar panel.

The key step in the 2007 discovery was the use of a surfactant called CTAB. In 2010, Rice graduate student Sravani Gullapalli was attempting to refine the “nanojack” synthesis even further when she discovered lava dots.

“This new chemistry to make the tetrapods was fairly cheap, but we were looking for an even cheaper way,” Wong says. “Sravani said, ‘Let’s get rid of this expensive phosphorus surfactant and just see what happens.’ So she did, and these little things just popped out on the electron microscope screen.”

Wong recalled the team’s initial surprise. “We said, ‘What is going on here? How do you go from four-legged nanojacks to these little balls?’”

He said it took the team more than a year to decipher the unusual formation mechanism that yielded the hollow, soft-shelled particles.

To make the particles, Gullapalli added three kinds of solid powder — cadmium nitrate, selenium and a tiny amount of CTAB — to an oil solvent. She then slowly heated the mixture while stirring. The cadmium nitrate melted first and formed tiny nanodroplets that cannot be seen with the naked eye.

She notes the cadmium selenide shell surrounding the hole is nanocrystalline and is enveloped in a soft outer shell of pure selenium.

When Gullapalli examined the lava dots with a transmission electron microscope, she found them to be bigger than standard quantum dots, about 15 to 20 nanometers in diameter. The holes were about 4 to 5 nanometers in diameter. She also noticed something peculiar: When sitting by themselves they appeared round, and when tightly packed, the shell appeared to become compressed, even though neighboring dots never came into actual contact with one another.

“That’s one of the twists to this weird chemistry,” Wong said. “The solvent forms its own surfactant during this process. The surfactant coats the particles and keeps them from touching each other, even when they are tightly packed together.”

The results appear online in the journal Nanotechnology.