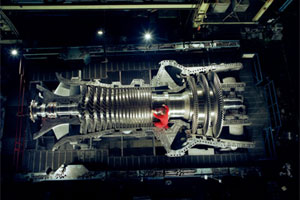 The three agreements include six new combined-cycle power plants that ultimately will increase Algeria’s generating capacity by 70 percent, adding more than 8 GW of electricity; two fast-track projects that added 528 MW of capacity for the past summer’s peak demand; and a simple-cycle power plant to add 370 MW to Algeria’s electricity grid.

Under the first agreement, GE has signed a $1.9 billion contract with Société Algérienne de Production de l’Electricité (SPE Spa), part of the Sonelgaz Group. For the six new combined-cycle power plants, GE is supplying Series 9F-3 gas turbines. Using natural gas from local Algerian gas fields, the turbines will be equipped with GE’s Dry Low NOx (DLN) dual-fuel combustion technology to reduce emissions, extend maintenance intervals and enable the Sonelgaz power plants to operate with greater flexibility. The 9F-3 gas turbines will be manufactured at GE’s Greenville, S.C., facility while the steam turbines and generators will be built in Schenectady, N.Y., for shipment to Algeria.

The nine Sonelgaz power plants receiving the GE technology are located in northern Algeria and will begin simple-cycle duty in 2015 and combined-cycle operation in 2017.

Additionally, GE announced the plan for a long-term joint venture with Sonelgaz for the development of a new production facility in Algeria that will eventually produce more than 2 GW of power generation equipment per year

For the second agreement, GE delivered its advanced aeroderivative gas turbines to support Algeria in meeting its 2013 summer peak electricity demand. This followed the an earlier contract signed by a consortium of GE and Power Projects Company, an affiliate of METKA and SPE Spa in October 2012 for nearly $800 million to supply 24 trailer-mounted aeroderivative gas turbines and services for two fast-track projects in northern Algeria.