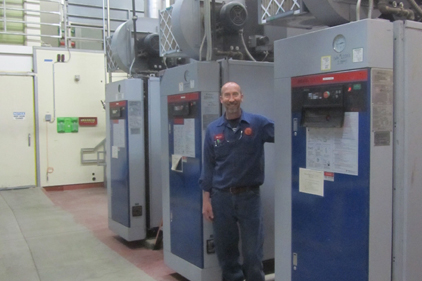 The maker of Fat Tire Amber Ale and a host of Belgian-inspired beers, New Belgium Brewing has tapped into the on-demand steam and sustainability advantages of three LX-200 boilers from Miura. Engineers at the third-largest craft brewery and the eighth-largest brewery overall in the United States say they selected the on-demand steam boilers because they generate full steam from a cold start in five minutes or less and are well suited for multiple-unit installation with changing load demands. Embracing a corporate culture that emphasizes philanthropy and environmental stewardship, the Fort Collins, Colo.-based brewery points to energy-efficient technologies such as its 10-year-old boilers to demonstrate its long emphasis on preserving resources and operating with a reduced carbon footprint.

“We were among the first in Colorado to get Miura boilers,” says Warren Bennet, a systems specialist at New Belgium. Bennet notes that New Belgium’s Miura boilers work in combination with a traditional watertube boiler that the brewery has had for nearly 20 years. “We use steam for brewing, sterilization and heating the building. Our steam load can spike up and down all day long. The Miuras and our older boiler work very well for us in tandem, with the older boiler in the background for low load times, and the Miuras doing high fire/low fire during high-demand periods. The Miura boilers make steam very fast. They don’t use a large volume of water, so when you do ask them to fire up and make steam, they produce it quickly, which is great for our needs.”

In addition, a microprocessor-based control system manages all three boilers and "stages them in" as needed, according to Bennet, depending on the steam-pressure setpoints. New Belgium credits the control system with cutting fuel costs by as much as 20 percent annually.