This website requires certain cookies to work and uses other cookies to help you have the best experience. By visiting this website, certain cookies have already been set, which you may delete and block. By closing this message or continuing to use our site, you agree to the use of cookies. Visit our updated privacy and cookie policy to learn more.
Home » Critical Considerations to Minimize Heat Loss in Industrial Process Applications
Fluid HeatingProcess ControlTemperature Sensing/ControlAll Process Industries
Industrial Insulation

When it comes to industrial applications, process control is absolutely critical. Poorly optimized process control can quickly become costly in terms of lost energy, translating to financial loss. It also can inhibit the transport of the material through the piping, potentially damage the quality of the substance within the pipes, and put the safety of plant workers at risk. To address each of these issues, industrial systems are designed to operate within a certain temperature range. The temperatures of industrial applications are managed by using insulation.

Maintaining the designed temperatures can be crucial to ensuring that the system caters to the unique chemical needs pertaining to extraction and end use of the substances within the pipes. For example, high viscosity materials may need higher process temperatures to become malleable enough to be extracted efficiently. Other materials may become nonviable for end use if they become too hot.

Moving beyond the operational side, process control also is critical for worker safety. ASTM C1055: The Standard Guide for Heated System Surface Conditions that Produce Contact Burn Injuries recommends that the maximum safe-to-touch temperature not exceed 140°F (60°C). It has been determined that the average person could touch a surface at this temperature for up to 5 seconds without suffering irreparable harm. Thus, many system designers target a surface temperature of 140°F (60°C) or less when designing an insulation system.

To accomplish this, system designers often will use insulation as the crux of the temperature-control method. When you consider the details of an insulation system, however, there is substantially more to consider than simply the insulation’s maximum use temperatures. Features such as hydrophobicity, compressive strength, the insulation binder, thermal shift, the geometry of the pipe surface and installation methods all influence insulation effectiveness. 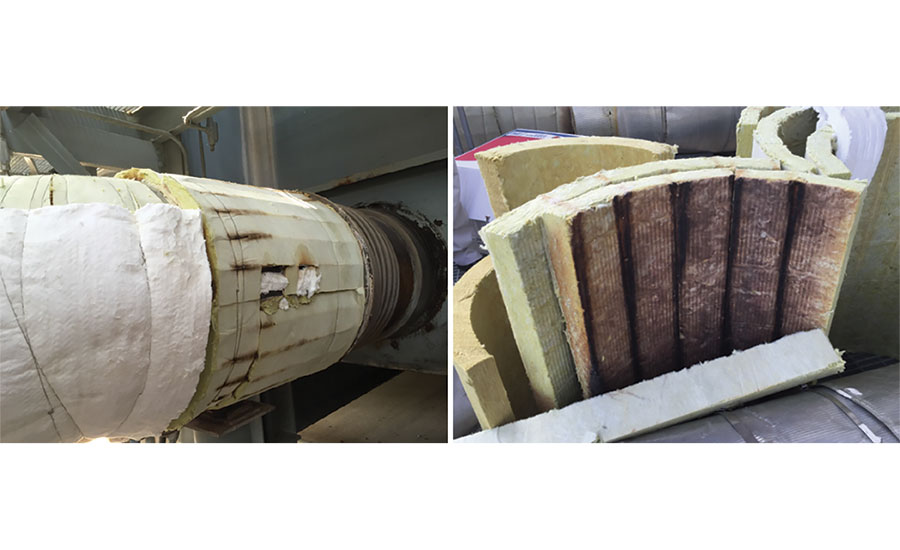 Given the broad spectrum of insulation materials available, understanding each of these variables and how the insulation can — or cannot — address them is key to ensuring that an insulation system and, subsequently, the pipe system, operate as designed. The key components of each of the features to consider are outlined.

Hydrophobicity. While most system designers select a hydrophobic (water-repelling) insulation as a method for mitigating corrosion under insulation (CUI), this feature also can play a crucial role in helping a system maintain its thermal integrity by preventing water intrusion. Water is highly thermally conductive, and when a system becomes saturated, the insulation’s ability to inhibit heat transfer decreases substantially until the insulation dries out or is replaced. Drying times vary significantly depending on the temperature of the system and whether or not the jacketing was installed with weep-holes. 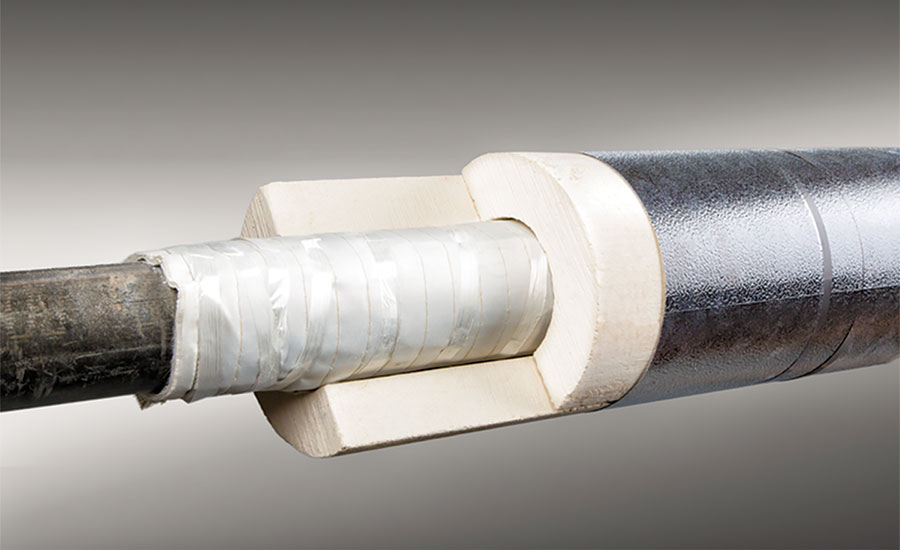 A high temperature microporous blanket can be paired with a water-resistant calcium silicate to create a hybrid insulation system. This allows for hydrophobicity on the inner layer and water resistance on the outer layer. Additionally, it takes advantage of calcium silicate’s compressive strength to support the jacketing. The microporous blanket’s low profile reduces the thickness of the overall insulation system without compromising thermal performance.

Compressive Strength. Because hydrophobicity is not a cure-all for water intrusion, system designers may need to consider selecting an insulation with high compressive strength. This will help prevent the jacketing from buckling and creating gaps where water could penetrate the system. Insulations with high compressive strength include calcium silicate, cellular glass or expanded perlite. They are especially important if the pipe system is located in an area or application where there is a lot of foot traffic on the pipes. Softer insulations like mineral wool or fiberglass will buckle under the weight of a person and, as such, tend to be better solutions for vertical pipe runs or systems that are too high off the ground for plant workers to easily walk on.

Binder. Another key component to ensuring an insulation maintains its thermal integrity is to ensure that its binder remains intact. (This feature does not affect molded insulations like calcium silicate or expanded perlite, or thin blanket insulations like microporous blanket or silica aerogel.)

Insulations that are held together with binder include mineral wool or fiberglass. Binders in insulation typically are organic in nature and, as a result, they tend to begin to oxidize and burn off at approximately 450°F (232°C). This reaction is called binder burn-out, and it can cause the insulation to lose its structural integrity. In some applications, where there is a lot of vibration, or there is a risk of external impact, binder burn-out can make the insulation prone to shift with gravity to the bottom of the pipe. This causes inconsistencies in the thickness of the insulation, which can result in inconsistent thermal performance, decreased process control and hotspots that create burn hazards. 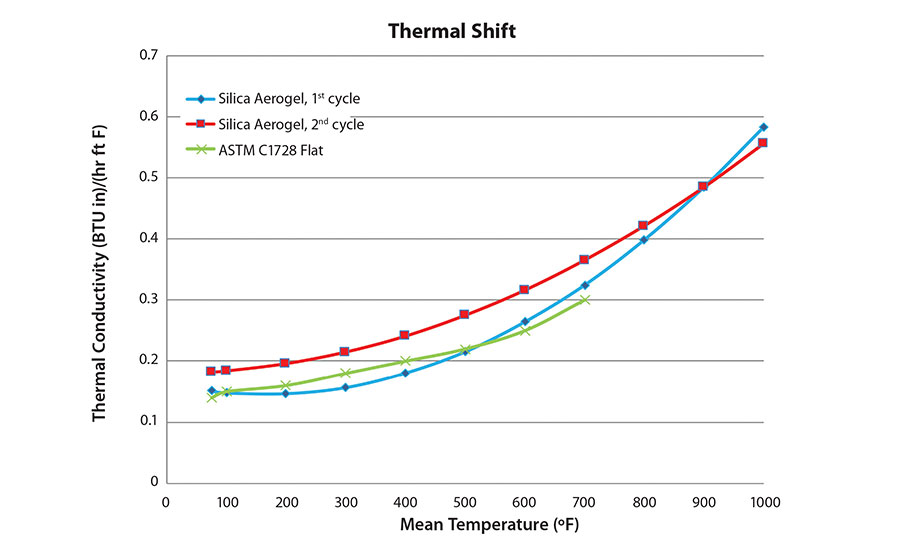 Thermal Shift. Thermal shift is a relatively new finding in the industrial insulation industry. It refers to an insulation’s decrease in thermal performance as a result of exposure to higher temperatures. Researchers tested several industrial insulations, including calcium silicate, mineral wool, expanded perlite, microporous blanket and silica aerogel, and they found that thermal shift was only present in the tested silica aerogel. It begins when temperatures exceed approximately 300°F (149°C). The tests showed that the temperature causes the silica aerogels within the insulation to fracture, subsequently causing the thermal performance of the insulation to degrade. The higher the temperature, the more rapidly the aerogels will fracture.

Fortunately, the thermal degradation is not indefinite. It stabilizes and remains consistent once it reaches a certain point. This allows designers to correct for thermal shift in their designs by adding additional layers of insulation to the design. It is important to address thermal shift preemptively because it is unlikely that a system will be corrected once it has been installed.

Designing the thickness of the insulation for a pipe (round surface) using thermal conductivities for flat surfaces will result in underdesigning the insulation thickness. As a result, it is important to note whether the data being used to design the specifications refers to heat transfer on a flat surface or a round surface. Many companies do not publish the round-surface data. System designers may need to request the information from the insulation manufacturer to ensure their specifications are accurate for the application.

In conclusion, while process control may seem to simply be a matter of specifying an insulation that has a maximum use temperature that falls within the parameters of the operating temperature of the system, designers should be both careful and thorough when selecting an insulating material. By taking the unique needs, requirements and nuances of the application into consideration in the design phase, designers can ensure that their insulation system is effective at maintaining the integrity of the process control, protecting plant and personnel safety and saving energy for the system overall.

Kim Melton is a technical writer and senior marketing specialist for the Performance Materials & Industrial Insulation Group of Johns Manville, a Berkshire Hathaway Co. The Denver-based company can be reached at 800-654-3101 or visit www.jm.com.