Cleaning and surface preparation are important production stages in many manufacturing industries, especially automotive. For example, machined parts and subassemblies must be thoroughly clean before they move into subsequent stages of assembly or coating. Metal burrs, filings and dust from machining, plus oils and other surface contaminants caused by previous production steps, must be removed. For any component that will have a specialized coating or paint applied, or be subject to some sort of surface conditioning, surface processing is an even more critical adherence requirement.

Ecoclean is a global provider of industrial robotic washers often used for such surface preparation. Headquartered in Germany with locations in nine countries, Ecoclean supplies industrial parts-cleaning technologies to global automotive car and truck manufacturers as well as engine makers.

Throughout the automotive industry, its EcoCFlex and EcoCAgile systems are used to clean powertrain, engine and transmission parts with heated, water-based soap solutions — including cycles with pressures of up to 10,000 psi — before the parts move to assembly lines for installation. Downtime for this equipment can disrupt those assembly lines, costing hundreds of thousands, if not millions, of dollars in lost production.

Unfortunately, early versions of the EcoCFlex Classic robotic washers were having sporadic problems heating water. Finding a simple way to monitor the health of heating elements in the robotic washers became a key objective. The main symptom of a heating problem was excessive heating times. 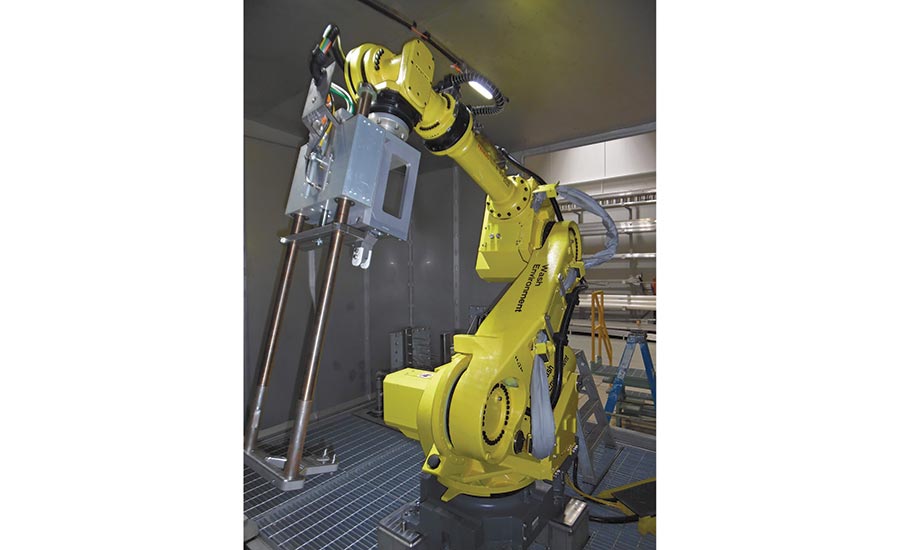 Two large immersion heaters located in the bottom of a tank were tasked with heating as much as 1,000 gallons of water. Ecoclean uses various size heaters in its washers, from 8 to 90 kW, drawing three-phase 480 VAC. Each heater comprises several heating elements connected with a fuse and an on-and-off contactor to energize them. The washer tank water can take up to two hours to heat, depending on the washer model’s tank size.

Because the heaters consist of several heating elements, the primary symptom — excessive water heating times — was frustratingly nonspecific. The issue might be a blown fuse or an open element pulling less current than it should. The operators found it hard to identify the offending element, forcing a technician to go inside the tank, drain the water and do the needed troubleshooting and repair. Once the repair was complete, the washer could be refilled, and the parts-cleaning operation could be started up again. The task could take the better part of an entire work shift, slowing production if not stopping it altogether.

The heater failures often were occurring due to damage from coarse debris that would accumulate at the bottom of the tanks, on top of the water heaters, said Les Brumar, Ecoclean’s manager of controls engineering. “Our customers typically put two washers on a line,” he explained. “The first is a primary wash, which cleans a lot of large refuse —such as aluminum or cast-iron shavings — from rough broaching and drilling operations. The second provides more thorough cleaning at the end of the line, but [it] also accumulates debris.”

While the Ecoclean washers have a pump and filter to remove suspended particulate matter, heavier debris from objects like 500-pound engine blocks and cylinder heads fall through a grate to the bottom of the tank. The heavy debris then is cleared every few months as part of the washer’s maintenance schedule.

“[During maintenance,] one or two workers enter an empty tank, remove the grate and shovel out the debris,” Brumar said. “But in doing that, they can inadvertently damage the heaters. Even a small pinhole in their housings can cause trouble, so we installed shields. But, sometimes, too, a combination of soaps and oils or coolants from prior operations would create a tar-like sludge on top of the heater elements, causing excessive heat at the elements and damaging them.”

Clearly, the company needed a better indication of heater performance in their industrial washers. “Because the elements heat such a large tank of water, we initially just monitored the water temperature. When it reached the desired setpoint, the heaters automatically turned off,” Brumar said. “Since we expect it would take a predetermined amount of time to heat a given volume of water, timers were the only way that we had to know the heaters were working properly. 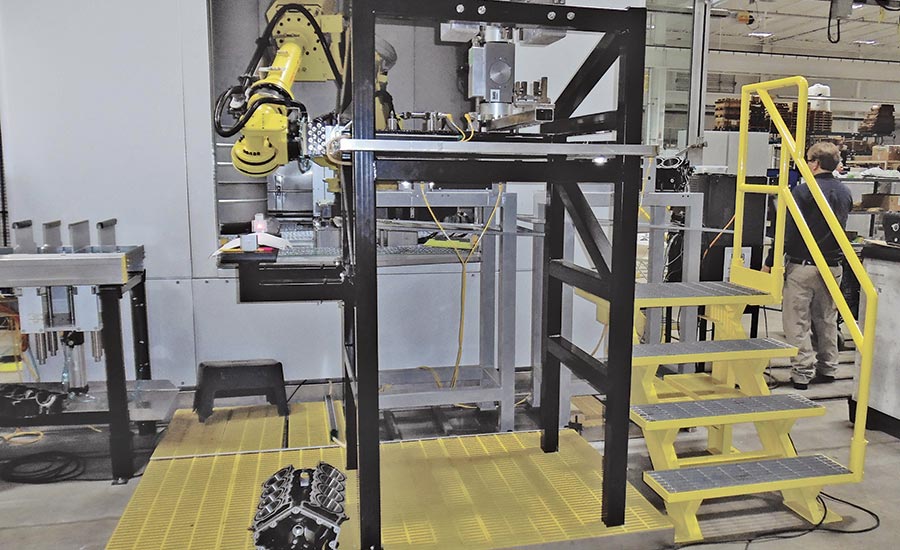 The Durr EcoClean EcoFlex robotic washer is used to clean machined parts and subassemblies thoroughly before they move into subsequent stages of assembly or coating.

“We soon realized we had to figure out how to alert operators to an impending heater failure, so they can manage the heating process with the other heaters inside a tank,” Brumar added. “That way, they could schedule preventive maintenance and repairs before an undertemperature situation slowed or shut down an assembly line.”

Seeking a solution, Brumar first contacted Ecoclean’s heater supplier. They suggested that the thermocouple in each heating unit be connected to a temperature controller for monitoring. An alarm contact on the controller then could alert the parts-washing equipment operator whether a heater was working or not.

Brumar and his team tried this approach, but they were not satisfied. “The problem was that the thermocouple device was mounted to only one of many elements inside each heater,” Brumar recalled. “So, while one element might be fine, others might not be, resulting in the heaters pulling less current and causing long heatup times again. This delay would then create a bottleneck on the production line, causing customers to lose throughput.”

After finding the thermocouple solution insufficient, Brumar shared the vexing issue with a local manufacturers’ representative. After giving the matter some thought, the rep suggested Brumar trying a Sirius 3RR, a current-monitoring relay manufactured by Siemens Industry Inc., Alpharetta, Ga. The relay could continuously check the power drawn by each heater.

“It worked,” Brumar said. “After all we had gone through to fix this issue, we were elated to find a reliable way for our customers to tell if the heaters in our washers were working properly.”

Ecoclean’s industrial washers are now using a three-phase standard version of the Siemens current-monitoring relay. In addition to motor loads, the relay can monitor multi-element heater loads and detect single-element failures. It also alerts maintenance prior to subsequent failures that might lead to extensive downtime and repair. Also, it provides a visual display for operating and diagnostic messages.

The relays are directly mounted to a Siemens 3RT contactor on the part-washing systems, but they also could have been mounted on a DIN rail when using third-party contactors. In turn, they can communicate with the washer’s third-party PLCs.

“We chose the size of the Sirius 3RR relay that’s appropriate for a washer heater’s current range, then set the minimum amps,” Brumar said. “If a heating element falls under that, we alert the operator to a problem. 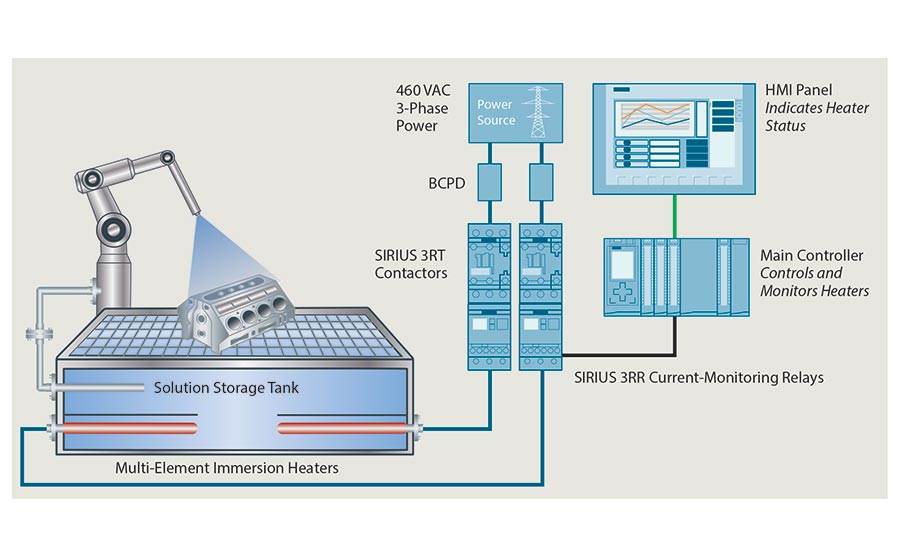 Current-monitoring relays were added to an industrial washer application with multi-element heaters. The relays can monitor the multi-element heater loads and detect single-element failures. They also alert maintenance prior to failures that might lead to extensive downtime and repair.

Given the success on early installs, Ecoclean opted to add the Siemens current-monitoring relays as standard components in all its robotic washers to keep operators informed of the unit’s water-heating performance. But, the biggest benefit of the Siemens relays goes to Ecoclean’s customers.

“Now, if the Siemens 3RR relays show diminished or no amps being drawn, a plant electrician can check for blown fuses or open elements that are operating at reduced power and therefore causing long heatup times,” Brumar said. By adding this capability, Ecoclean’s washers can help a factory support condition-based and predictive maintenance models. That is because each washer can have up to two large immersion heaters, and heatup times are proportional to how many heating elements are working at any given time.

“If a tank heater loses a few elements, it might extend heatup times by several minutes or even hours,” Brumar said. “But, at least the operators are aware that those heaters will need repair soon or that sludge might be building up. They can then schedule interim maintenance inside of our washers’ required maintenance windows.”

In the end, added visibility provides better process insights. By knowing that some heaters are failing or have failed — because their drawn amps are dropping — operators can then choose to “nurse along” a parts washer until production is slack and doing maintenance and repair will not impact the production line, Brumar noted. That can save the plant significant costs in lost output.

To learn more about the Sirius 3RR current-monitoring relay, call 800-365-8766 or visit Usa.siemens.com/controls.