If an application generates heavy amounts of moisture or involves drying solvents, the role of proper ventilation and the design of the exhaust system must be considered.

Drying applications vary: from drying frac sand — a relatively simply process often performed for screening purposes — to applications like drying wetted primer in ammunition — a process that depends on accurate temperatures sustained over time. Yet, in drying applications from simple to complex, airflow and temperature uniformity makes a difference.

The type of drying system that should be selected for a given application is influenced by several considerations. Key among them is the amount of moisture to be removed and the conditions required to produce the product. Inherently, the drying process involves removing moisture or some other solvent from the part surface or part interior. While drying seems straightforward at first glance, consistent drying results require careful attention to key elements. Exhaust is one of the bigger questions.

In an interview with Editor Linda Becker, Despatch Industries’ Rolf Kragseth shares further insights about drying products with solvent loads — the type of drying typically done in Class A ovens.

A drying oven, by definition, removes vapor from the process. As such, it must have adequate exhaust capability along with fresh makeup air capacity. A forced exhaust fan is recommended for drying applications that generate moderate to high amounts of moisture. For any drying application that evolves solvents in the process cycle, however, a forced exhaust fan is a required safety feature.

Inadequate ventilation can result in poor drying performance. Worse, in some cases, it can result in condensation on the oven walls or moisture buildup in the insulation space. Warmer air picks up more moisture than cooler air, so a warmer oven will typically speed the drying process; however, many parts can be damaged by drying too quickly. Ceramic catalyst cartridges, for example, can be damaged by drying too rapidly, and pharmaceutical glassware can crack under thermal shock.

Proper ventilation is especially important for drying applications involving solvents. The exhaust fan and dampers on a Class A solvent-rated oven are designed to allow enough fresh air ventilation into the oven to dilute the solvent given off in the process to safe levels — or levels that will not become explosive. The user is responsible for safe operation of the oven. This means controlling the batch size to ensure the solvent per batch remains within the nameplate rating on the oven.

Solvents given off in a batch process tend to spike at some point in the process. A drying process profile often includes a soak at an intermediate temperature rather than rapid ramping to the final temperature. The fresh air ventilation rate is calculated from the solvent rating on the nameplate, and that calculation includes safety factors to allow for a spike in solvent evolution during the process. But, the user must understand their specific process and set a temperature profile that does not ramp too quickly or soak at too high a temperature. Failure to do so could result in an excessive spike even if the batch size is within nameplate ratings.

Loading a Class A solvent-rated oven can be dangerous if safe loading procedures are not followed. Class A ovens include a purge timer to remove the potentially explosive mixtures of solvent that could build up after loading the oven but before enabling the heater. Before loading a Class A batch oven, cool the oven and reset the cycle so the purge cycle engages before the heating cycle starts. 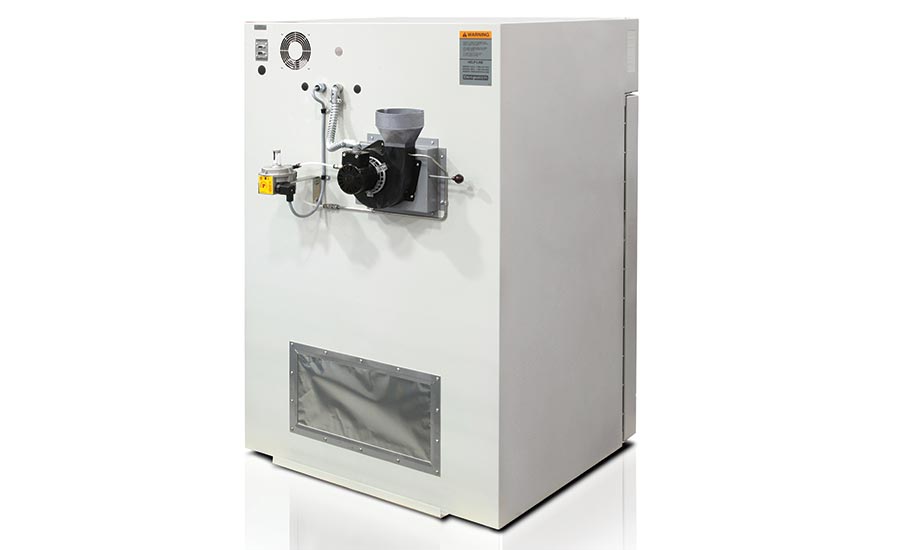 A foil relief panel may be preferred over explosion spring-latches or structural plugs on doors. The low mass of the foil panel reduces the risk of injury when it relieves.

A Class A oven has one last safety feature: the explosion-relief panel. If an explosion occurs in the oven, the relief panel allows a controlled release of pressure. Explosion relief can reduce the risk of catastrophic injury or damage. A foil relief panel may be preferred over explosion spring-latches or structural plugs on doors. The low mass of the foil panel reduces the risk of injury when it relieves.

The Case for Controlled Airflow in Drying: .22 Caliber Rimfire Cases

An ammunition company in the upper Midwest produces a variety of bullets, including .22 caliber bullets. All bullet production must take place within a critical window of temperature uniformity and airflow. This is a good example of a drying process that requires tight process control. 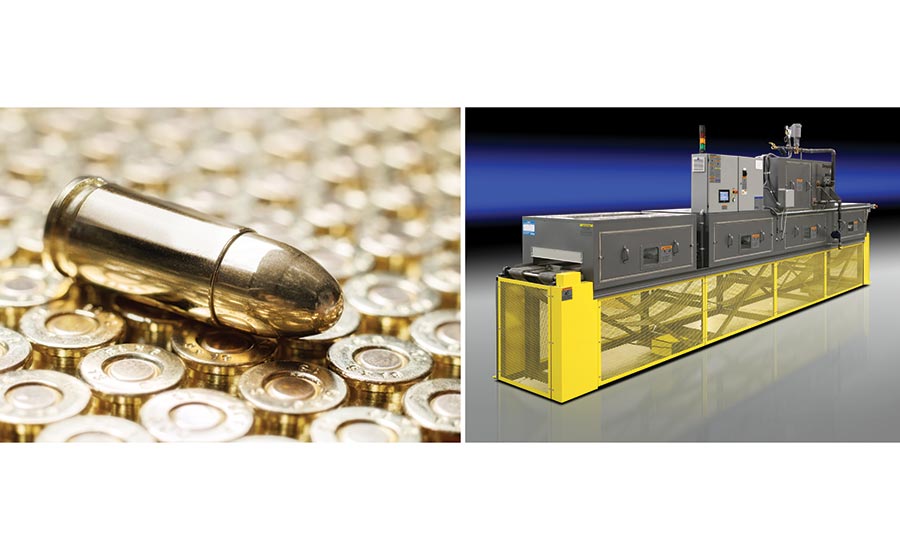 The drying solution for the bullet application was an oven that optimized airflow using perforated aluminum plates and a specially designed nozzle system. The dryer delivers both heat and airflow to the wet primer deep in the casing.

The manufacturer had a thermal profile that included a unique set of dryer design parameters. They include highly accurate temperature control along with the ability to control the dust that accumulated throughout the process. (The dust also had the capacity to detonate on impact.) The desired drying solution for .22 caliber bullets was a continuous oven with two conveyors carrying pallets at a high rate, with each pallet containing 300 casings.

After a critical look at the configuration and thermal profile of the existing oven, a new engineered drying solution was specified. The oven has optimized airflow using proprietary, perforated aluminum plates and a specially designed nozzle system that delivers both heat and airflow to the wet primer deep in the casing.

The new oven is capable of producing twice as much product as the previous oven. The engineered system uses a steam heat source with air temperature limited to 185°F (85°C) using a backup high limit controller. To handle the primer dust that accumulated during the processing, the oven has access points for interior cleaning and filters for the recirculating air. 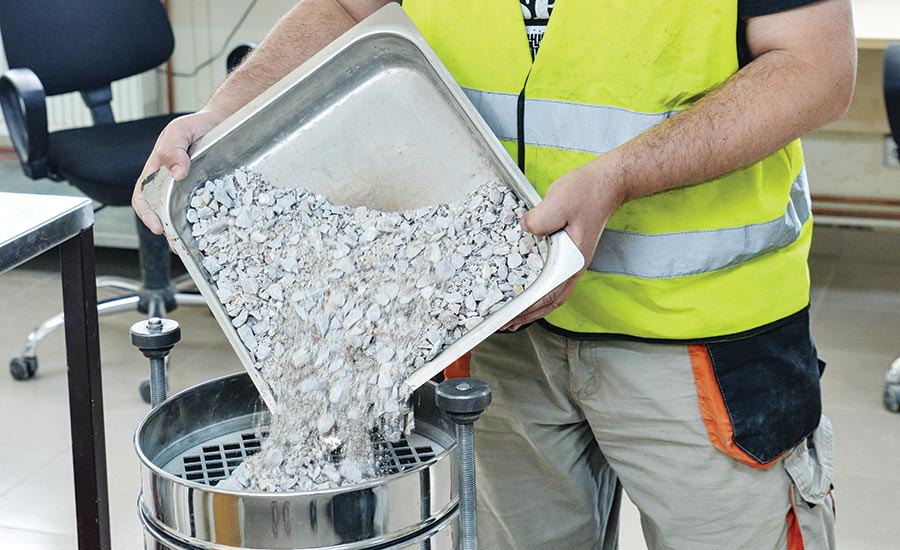 Asphalt mixture samples must be heated and dried to determine moisture content in the mix as part of the quality control process during road construction and repair.

Even the most mundane drying processes require a degree of uniformity and repeatability.

Asphalt mixture samples, for example, must be heated and dried to determine moisture content in the mix as part of the quality control process during road construction and repair. The samples are heated to a temperature of 325°F ±25°F (163°C ±14°C), dried and tested. High moisture content in the aggregate prior to mixing can lead to poor roadbed strength and increased potential for rutting.

While a kitchen range or a low cost static industrial oven can technically meet the uniformity requirements of these test specifications, only a high quality forced convection industrial oven with precise control and uniform performance will ensure accurate, repeatable test results. 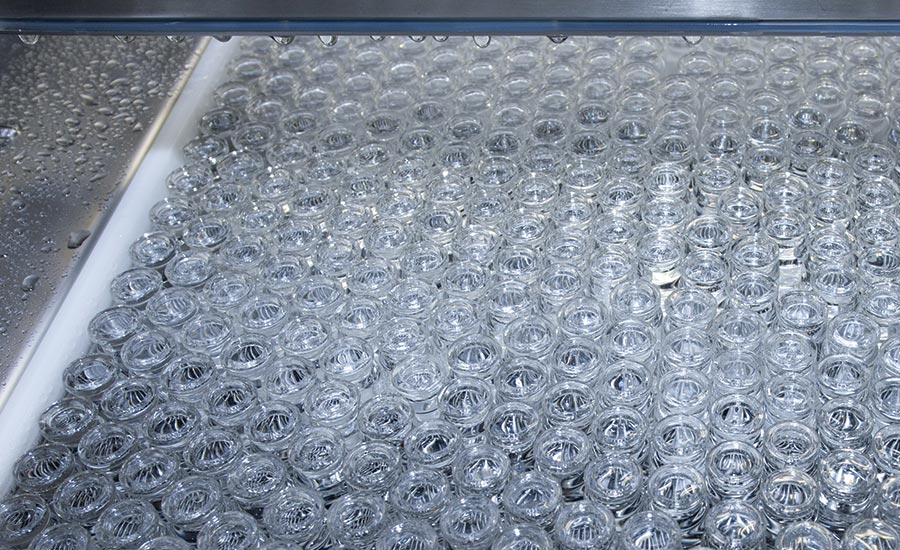 Even the less demanding drying processes such as drying glassware require a degree of uniformity and repeatability.

Good process control in a drying oven depends on a well-designed temperature control system and an optimized physical configuration.

Most people look at an oven and think of it primarily as a structural, insulated sheet metal assembly with a heater inside. Instead, it is better to think of an oven as a high performance temperature control system with an insulated box around it.

The control system for an industrial oven consists of a temperature sensor, PID temperature controller, heater control relay, heater and high limit controller. The temperature sensor for a drying oven is usually a Type J thermocouple, which is ideal for process temperatures in drying applications and limits of error under 1 percent. Thermocouples usually are placed in the supply duct airflow, where they are protected from damage but still measure the temperature near the chamber temperature and respond quickly to change.

Many high performing PID controllers on the market offer precise indication and control. They can include single setpoint control or profiling control using a process recipe. Most include an autotune feature to simplify setting the proportional control to optimize it for a given process. The controller works in tandem with the heater control relay. In an industrial oven, the relay is usually referred to as a solid-state relay (SSR) or silicon-controlled relay (SCR). These simple devices deliver rapidly cycled, high current power to a heater in response to a low voltage input signal from the PID controller. The heater has either sheathed elements or open coils of nickel-chromium resistive wire. Open-coil heater elements improve control system response, but sheathed heaters are used where lower watt density is desired or risk of shorting across uninsulated elements is present. A high limit controller — a required safety feature for industrial ovens — cuts power to the system in case the primary heating circuit fails in a powered state.

The physical construction of the oven has an enormous impact on the performance of the control system. A carefully chosen, highly accurate control system cannot compensate for a poorly designed oven configuration.

The two major considerations in an oven’s mechanical design are proper sealing of the chamber and effective air distribution throughout the system. A tiny leak across a door seal at elevated temperature can allow a cold thread of air to penetrate the working area, diminishing process control. A well-designed oven door will resist warpage due to thermal stresses. Over time, this helps ensure long oven life with tight process control. The door seal itself requires regular inspection and replacement if damage is evident. 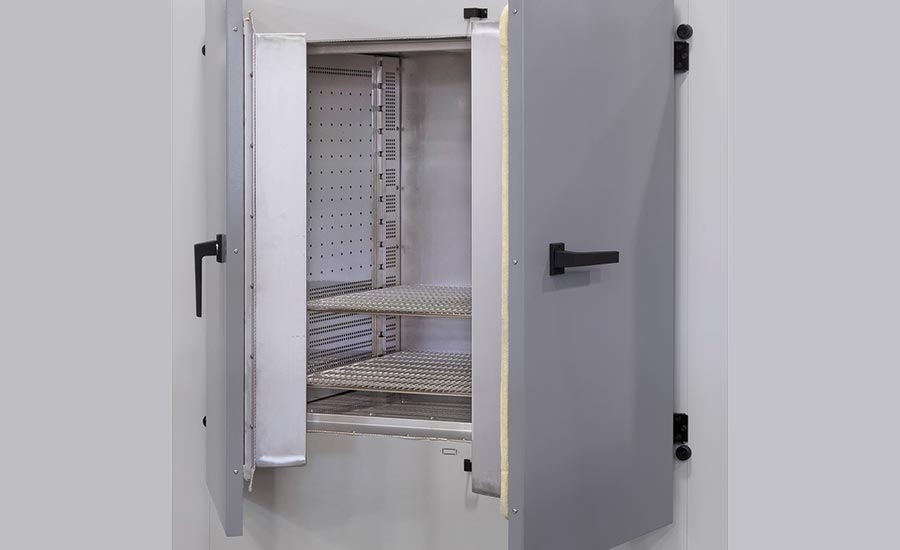 Door seals require regular inspection. A tiny leak across a door seal at elevated temperature can allow a cold thread of air to penetrate the working area and affect process control.

It is surprisingly difficult to design an oven with good uniform airflow and performance. Airflow is unpredictable, and small design details in a duct can result in poor mixing, undesirable eddies and poor temperature control. It can be a game of whack-a-mole. As you direct air to one area, it can result in poor airflow to another. Increasing overall air circulation will improve uniformity; however, in drying applications, higher air velocities can have the adverse effect of blowing fines from some dried materials.

In conclusion, if an application generates heavy amounts of moisture or involves drying solvents, the role of proper ventilation and the design of the exhaust system must be considered. Whether an industrial drying process is mundane or highly specialized to overcome difficulties and optimize a process, oven buyers should to pay close attention to the characteristics that lead to high accuracy and process repeatability: control system and physical design.

Rolf Kragseth is an applications engineer with Despatch Industries, Minneapolis, a manufacturer of industrial ovens and other thermal products. The company can be reached at 952-649-5289 or visit www.despatch.com.