This website requires certain cookies to work and uses other cookies to help you have the best experience. By visiting this website, certain cookies have already been set, which you may delete and block. By closing this message or continuing to use our site, you agree to the use of cookies. Visit our updated privacy and cookie policy to learn more.
Home » Wireless RTDs: The Modernization of Temperature Measurement
TechnologyTemperature ProfilingTemperature Sensing/ControlAll Process Industries
Temperature Measurement

Wireless RTDs have bridged the gap from decades of hardware to remotely connected devices.

Rapid growth and innovation in the past decade have enabled companies to implement key technologies to monitor, analyze, control and automate their assets. Wireless resistance temperature detectors, or wireless RTDs, have bridged the gap from decades of hardware to remotely connected devices. This modernization has greatly increased the demand for reliable, robust wireless technologies. From transmitting sensors to gateways and their physical connections, understanding radio frequency (RF) basics and hardware principles is vital for accurate industrial temperature measurements.

An RTD is a device containing a resistive element constructed of a material whose resistance changes with respect to temperature. The electrical resistance of materials is different at different temperatures. Sometimes referred to as a bulb or sensing element, this relationship is based upon the type of metal used within the resistance source. The most common sensors are platinum based and provide established output curves that work well over a range of temperatures. RTDs are known for their stability, linearity and accuracy. Consequently, RTDs are among the most widely used temperature sensor for industrial and process applications.

The basic two-wire RTD is the most cost effective but has performance drawbacks. It does not account for the added resistance from the lead wires on the temperature measurement. Even adding a short section of small-diameter nickel lead wires can vastly skew a very accurate two-wire platinum RTD sensor. This added resistance should be identified for installations that require high accuracy or long connection distances.

Four-wire configurations provide the most accurate and foolproof connection. The additional wire allows for the creation of a four-wire Wheatstone bridge circuit. In a true bridge configuration, the fourth wire provides even flow to the wires performing the temperature sensing while balancing and removing the inequalities of the lead wires. This filtering allows for inequalities such as uneven lead lengths, mixed wire gauges and dissimilar ambient conditions among the lead wires.

One disadvantage of using four-wire RTDs is that one more extension wire is needed. For long-length connections runs, this additional wire cost may be a small price to pay for accuracy or installation requirements.

Outside of these unique circumstances, three-wire RTDs have become the industry standard. They provide repeatable accuracy that meets industrial needs and offer economical trade-off between function and form. They are used in many industrial applications and processes, especially in chemical refineries and petrochemical plants where temperature monitoring and control is of extreme importance. As a general rule of thumb, standard-construction industrial RTDs can be usable for both cryogenic temperatures as well as applications up to 1200°F (649°C). 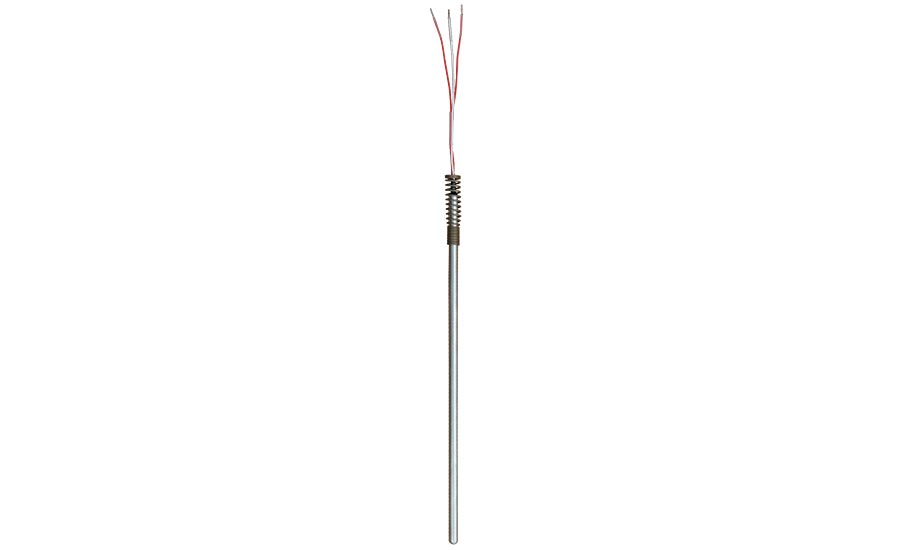 Shown here is a typical RTD configuration when installed in a thermowell. Spring compression against a terminal block or transmitter provides good contact of the sensor tip to bottom of the thermowell.

Even with the range of performance capabilities and price points for wired sensors, engineering teams have been challenged to continually reduce the total operating and installed cost for temperature sensing projects. Sustained lower commodity prices have pushed oil-and-gas companies and others to demand increasing performance, productivity and efficiency of temperature-measurement devices.

One major area for cost reduction is eliminating the need for long or complicated wired connections. The larger cost to physically install RTDs is the associated burden of the conduit, cable trays, welding and fabrication, painting and insulation. Depending on the geographical region, the cost to install industrial RTDs is estimated at $25 to $45 per foot of installed RTD, which is not including the cost of the sensor itself.

An obvious solution to reduce associated wiring cost is by changing to wireless RTDs for some plant locations. This offers a hybrid approach, combining both the traditional hardwired options as well as the wireless remote capabilities. Early adopters of this emerging technology have laid the foundation for future cost savings by taking the first steps toward enhanced productivity. 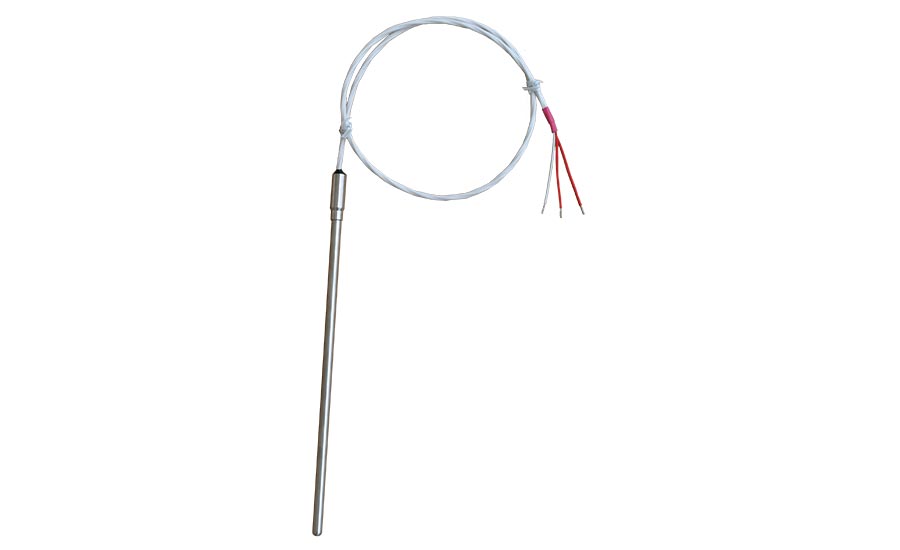 This is a typical RTD configuration for installation where extension lead length provides for a remote connection option.

Wireless RTDs are not a new concept; however, their adoption is far from widespread. Legacy plants and processing facilities built prior to the wireless transformation of recent years often rely on wired networks until outside forces (plant expansion, failed equipment and the like) force revisiting the temperature-measurement solution in place. Often, wireless RTDs are implemented when upgrades are scheduled or when a spot-specific solution is required. That being said, there are nearly 100,000 wireless RTDs deployed in industrial applications worldwide. And, while wireless technology is becoming a more integral part of our everyday lives, the technology itself is not fully understood.

At their core, wireless transmissions are radio-frequency signals that are emitted by an antenna on the transmitting end of one device and received by another antenna on the receiving end of a different device. The data content is first modulated by varying properties of the signal, which allows the data content to be physically transmitted. The signal is picked up by the antenna and then demodulated to recover the information after being received. The characteristics of the wireless signal are governed by the frequency, wavelength and amplitude.

Frequency ranges, or bands, are controlled by regulatory bodies unique to each country. The regulators dictate what specific purpose each band of frequencies can be used for and where their use is allowed. In the United States, the Federal Communications Commission reserved the industrial, scientific and medical (ISM) band, which provides a license-free operation in the 900 MHz, 2.4 GHz and 5.8 GHz ranges. A common example of an ISM frequency is WiFi, which uses both the 2.4 GHz and 5.8 GHz bands. Other countries will vary, but most have an allocated ISM band or bands of their own.

The final characteristic is amplitude. Amplitude is the peak height of the wave and is a function of power. The larger the amplitude or output power, the higher the wave’s peak. Almost all of the technologies being deployed in the wireless sensor field have fully adjustable output power, allowing the signal’s amplitude to be adjusted too. 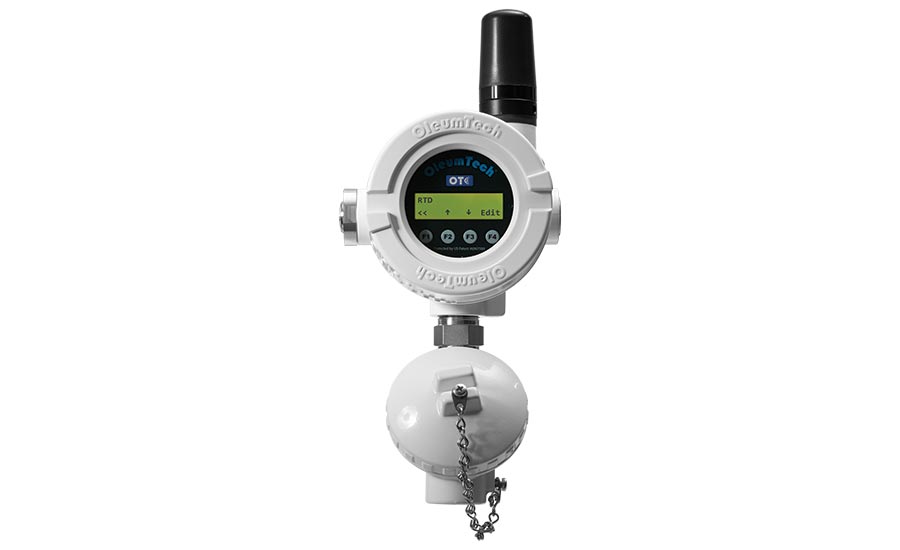 Currently wireless RTDs are being implemented whenever upgrades are scheduled or when a spot-specific solution is required. There are nearly 100,000 wireless RTDs deployed in industrial applications worldwide.

The combination of proven hardwired RTD performance with the flexibility of wireless solutions has culminated in both cost-savings benefits and the creation of wireless platforms that allow for future smart-device connectivity.

Wireless technology has become more robust, and customers are no longer limited to a singular band that might be congested by WiFi of other sensors. Wireless RTDs — certified for hazardous and nonhazardous environments and made for both 900 MHz and 2.4 GHz frequency spectrums — provide end users with the freedom to select what works best for their unique application. The overwhelming proliferation of embedded sensors and connected devices has opened up unprecedented visibility into operations and process measuring. These sensors open up the possibility for new practices, procedures or workflows that facilitate increased automation efficiency.

Stephen Drake, Ph.D., is the research and development manager of testing with Thermon Inc. The Houston, Texas-based company can be reached at 800-654-2583 or visit www.thermon.com.

Ted Johnson is the director of global temperature sales with SOR Controls Group. The Lenexa, Kan.-based company can be reached at 913-888-2630 or visit www.sorinc.com.

The Workhorses of Temperature Measurement