What Caused My Heater to Shut Down?

A troubleshooting guide to common causes of heater shutdown can help you identify why your thermal fluid heater stopped working.

Most modern thermal fluid heaters at industrial plants are reliable, so unexplained heater shutdowns do not happen often. As a result, many plant operators do not know how to fix a shutdown problem — they have never encountered one in the past. But, eventually one does occur, and it is usually at the most inopportune time. This means the operator is under pressure to get the heater back in operation.

Typically, the operator immediately calls the factory and asks a service technician, “What caused my heater to shut down?” But, before the technician can answer that question, he must ask the operator some questions of his own, including:

After getting answers to a few more questions, the problem is usually identified and quickly solved.

Operators would do well to learn about the most common causes of heater shutdowns before they encounter one. The time may come when it is necessary to fix the problem before help is available. So let’s talk about why heaters shut down and how to fix the problem. 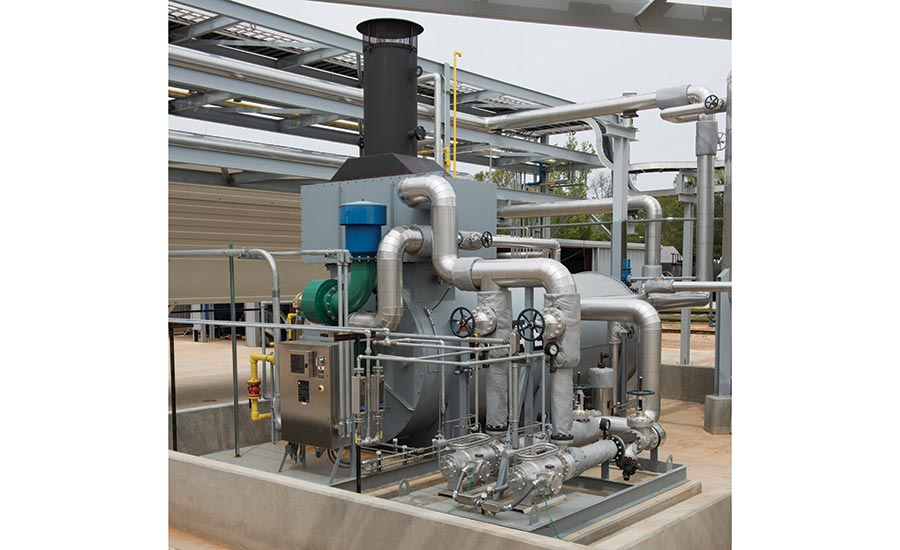 Operators would do well to learn about the most common causes of heater shutdowns before they encounter one.

By the way, virtually all thermal fluid heaters have similar circuits to protect them from abnormal operating conditions. So, this information could help you regardless of what company made your heater. 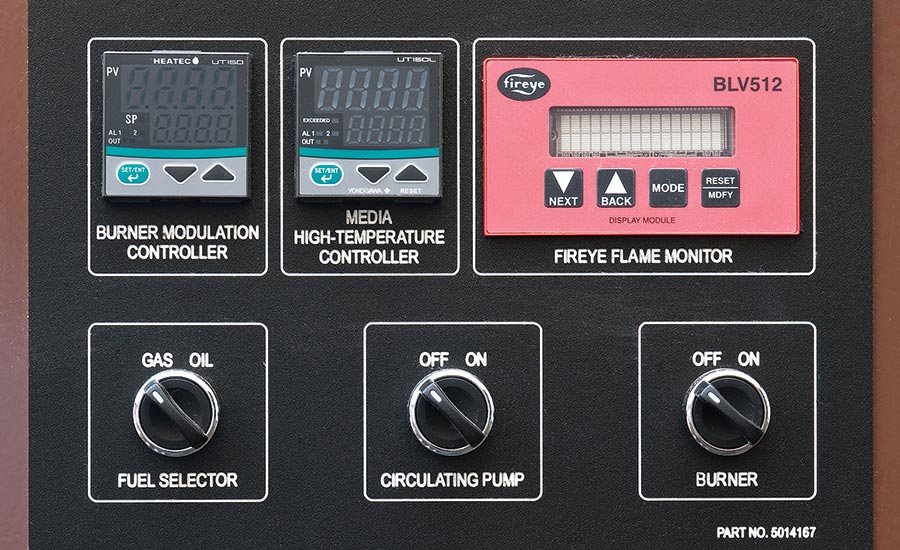 The message on the burner-management display shows the heater’s operating status. In case of an abnormal shutdown or lockout, the message identifies the cause.

The first step in fixing the problem is to identify which device sensed a problem and shut down the heater. This is not always easy: It could be any one of the 10. But, once the device is identified, the next step is to correct the condition that triggered the device.

With the advent of modern controls, identifying the device that shut down the heater has gotten easier on new systems. For instance, on heaters that are less than 10 years old, the controls may allow you to read an error message that appears on the burner display. The first line of the message identifies when the lockout happened: either during prepurge, purge, pilot trial for ignition, main trial for ignition or main burner on. The second line of the message identifies exactly which one of the 10 conditions or devices caused the lockout. 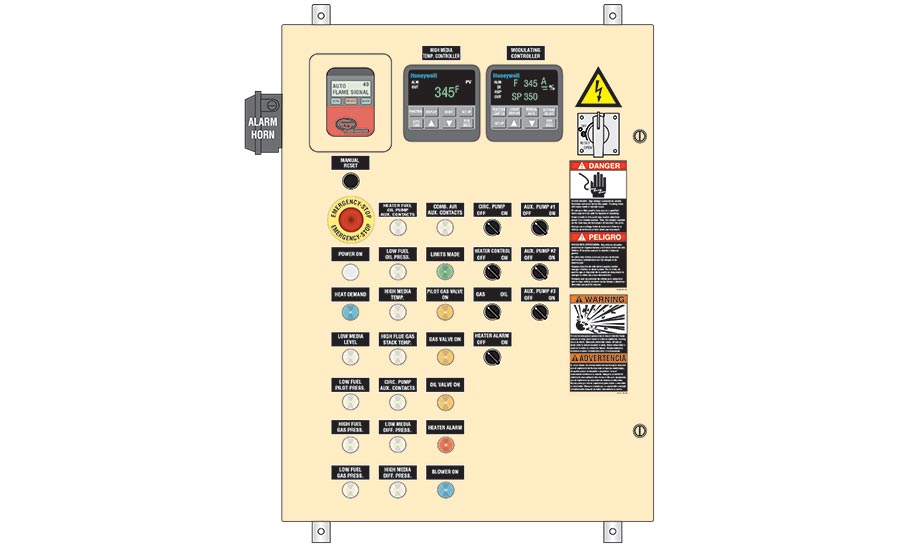 Status lights on the control panel can indicate where a problem might be. The status lights are arranged in order from top to bottom and in columns from left to right. That sequence corresponds to the sequence of the limit devices in the 3-to-P circuit. Each light indicates the status of one of the interlock devices. When one of the devices opens, its light goes out.

On older thermal fluid heaters, the controls are not as descriptive. In some cases, however, the first line of the message on the burner display still identifies when the lockout happened. The second line of the message may indicate the 3-to-P interlock circuit is open using language such as 3-P INTLK OPEN. Such a message does not, however, identify which one of the 10 conditions or devices caused the shutdown. To determine which one opened, it is necessary to check status lights on the control panel.

The status lights are arranged in order from top to bottom and in columns from left to right. That sequence corresponds to the sequence of the limit devices in the 3-to-P circuit. Each light indicates the status of one of the interlock devices. When one of the devices opens, its light goes out. And all status lights in order after that light will also go out. Thus, the first status light (in the order of lights) to go out usually indicates which device triggered the shutdown. 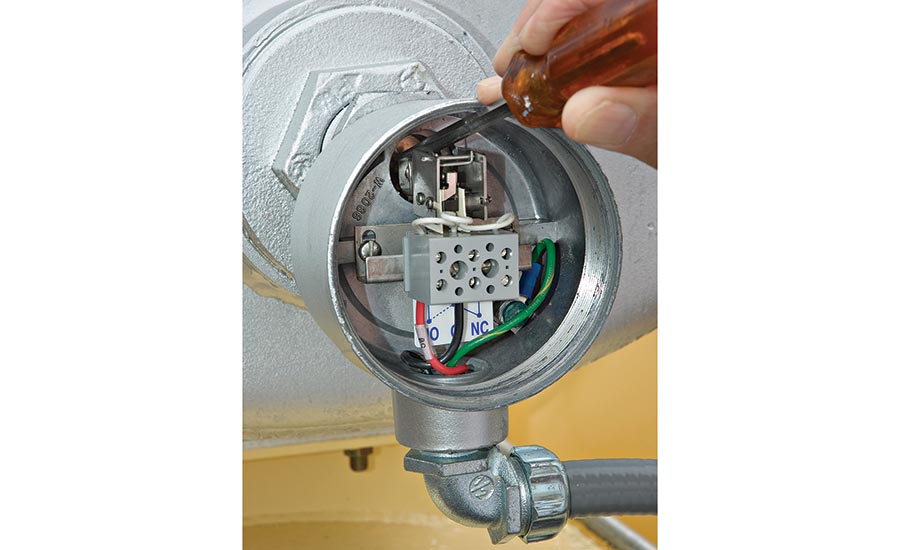 But, sometimes the status lights do not provide a totally reliable way to determine which device caused the shutdown. An example is when certain devices automatically reset themselves after a shutdown. If a device has reset itself, you will not know it caused the shutdown unless you were watching the lights and saw its light go out and then come back on.

Another concern is the status lights could have burned-out bulbs that went previously unnoticed. In that case, you must use a voltmeter to determine whether there is still voltage present at the bulb.

The first suspect is often the limit device itself. So, you may want to make sure the limit device is working properly before exploring other possible causes. It may not be set properly, and you may need to consult factory information provided with your heater for its recommended settings. Or, it may simply be defective. Again, factory information should provide instructions on how to check the device.

In some cases, you may want to just do the easiest thing first. For example, if the low media level switch caused the shutdown, the easiest thing to do is to check the level of thermal fluid (the media) in the expansion tank to see if it is really too low. If it is too low, add thermal fluid. But if its level is not too low, check to make sure there are no loose wire connections in the switch circuit. If the connections are okay, it may be time to check the switch itself. 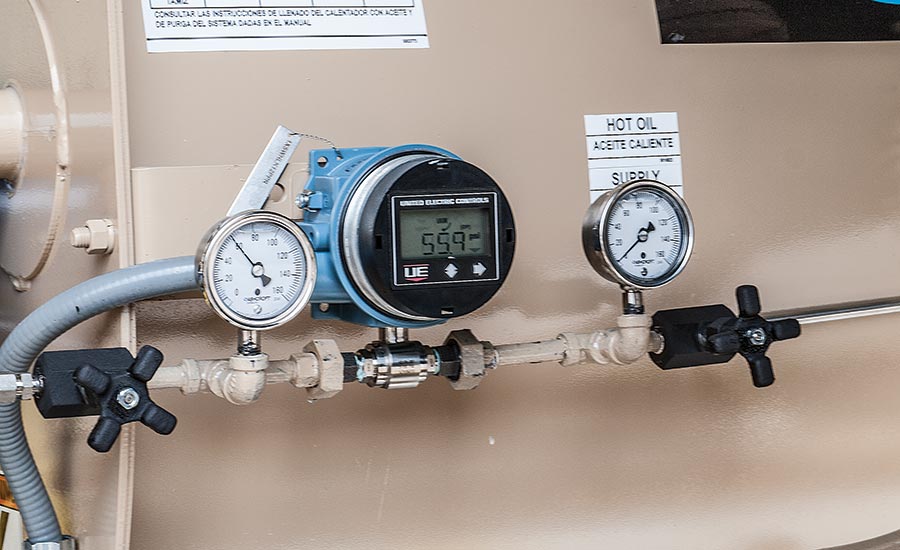 If the differential-pressure switch shuts down the heater, the cause could be any one of about nine things described in factory instructions.

Some shutdowns can have any one of numerous causes, including some that are not so obvious. So, finding the problem often requires using the process of elimination. Again, do the easy things first. For example, if the differential-pressure switch shuts down the heater, the cause could be any one of about nine things described in factory instructions. But, the most common cause is a clogged hot-oil filter. Check that first.

You get the idea: It pays to learn all you can about your heater before you encounter an emergency. At the very least, learn the purpose of every interlock device on your heater and where it is. The manufacturer of your heater should provide you with this information.