Improvements in heat exchanger, evaporation and zero-liquid discharge technologies work together to boost the efficiency of heat recovery in waste management.

The process-efficiency benefits of utilizing heat from one part of an industrial process in another are well understood. Heat reuse — sometimes referred to as regeneration — is widespread across a range of processes: pasteurization and sterilization, evaporation, drying, distillation, pressurization, cooking, space and media heating, and reactor heating, to name a few. In fact, the list of applications is as varied as the industries themselves.

At the same time, the environmental impact of all businesses — and industrial processing in particular — has come under increasing public and political scrutiny over the last 20 years. This has further lead to a general trend toward cleaner processes with fewer emissions, lower energy requirements and less waste production.

Efficient heat exchangers play an important role in this development in a number of ways. The first regenerative heat exchangers were invented by the Rev. Robert Stirling in 1816. He used them as an integral part of his Stirling engine design. Similar energy recapture was quickly utilized in blast furnaces, with one of the most well-known examples being the patented Cowper Stove from 1857. Since then, more applications for recovered heat have been discovered, and more efficient ways of implementing the technique have been developed.

Efficient heat recovery reduces the need for additional energy for heating processes. Certain design features — corrugated tubes, scraped surfaces — along with effective product and service flows, and continual monitoring of processes, have improved the process to the extent that a modern scraped-surface tubular heat exchanger may bear little visual resemblance to its forebears. The thermodynamic physics that underlie the processes are the same. Today, however, they are put to different uses.

As any evaporator is essentially a form of heat exchanger, using heat exchangers to supply heat for evaporation has become widespread. Beyond that, adding multiple evaporators provides additional energy benefits. (The first reduces energy consumption by 50 percent, the second by 33 percent, etc.) This has led to the adoption of multi-effect evaporators in a number of industries.

The effectiveness of such units in chemical processing and water treatment has allowed both end-users and manufacturers to extend the use of evaporation technology for product recovery and waste stream minimization. One common example is the implementation of zero-liquid discharge (ZLD). 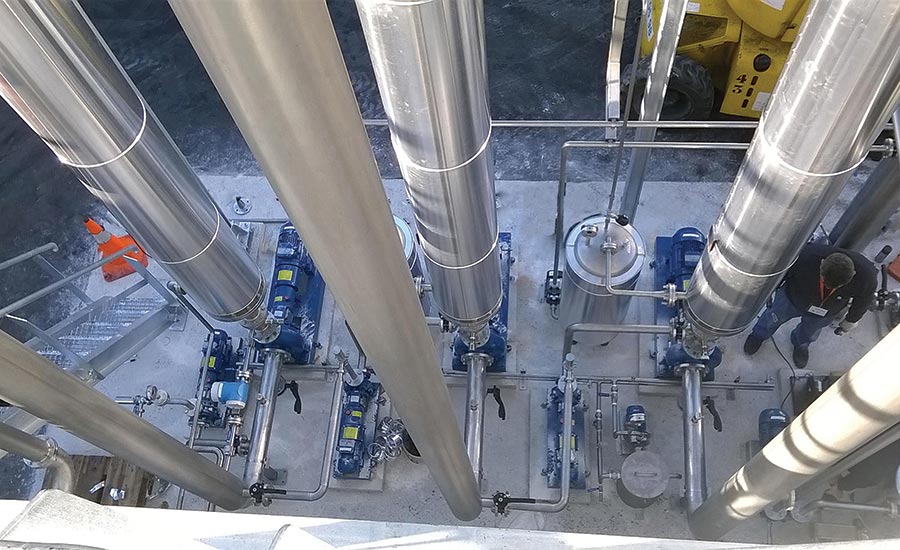 A multi-effect vapor compression evaporation system has been created for zero-liquid discharge use that employs scraped-surface heat exchangers.

Zero-liquid discharge aims to discharge no liquid waste to the environment. Instead, the goal of the process is to recover as many products from the waste stream as possible — leaving just water, which can be reused. Depending on the nature of the initial waste stream, the effectiveness of the evaporation systems, and any post-evaporation treatment, the water then can be used for various purposes, including cleaning, as a heating or cooling fluid, or even inclusion into other products.

The theoretical ability of zero-liquid discharge to separate unwanted materials from water — whether they are benign, hazardous or toxic — means that the resulting solid residues often are stable. A well-designed zero-liquid discharge system should minimize or even eliminate liquid waste streams. Instead, it produces clean water for reuse or environmentally friendly discharge, and a solid residue suitable for further processing (often to recover valuable components for use elsewhere) or for safe disposal.

To achieve this outcome, it is important that the correct zero-liquid discharge solution is chosen for each application. Even where the initial wastewater stream is relatively dilute, preprocessing may be required before the evaporation phase. In such cases, common water treatment techniques such as reverse osmosis generally are employed. The composition of wastewater streams varies greatly even where the same basic processes are involved. Certain sources will leave salts that may be hazardous or valuable — or both — in the water. Waste streams also may contain highly soluble calcium and aluminum salts as well as heavy metals that are not easily crystallized by evaporation. In this case, the waste stream will need significant levels of pretreatment, often using lime or soda ash to introduce sodium ions so that a crystalline solid can be produced by the evaporation stage.

The effective design of any zero-liquid discharge system is therefore dependent on the correct analysis of the water/waste stream. It is essential to have an accurate analysis of composition, flow rates, chemistry, etc. Without this, any designed solution will fail to deliver the required results, if it works at all.

A multi-effect vapor compression evaporation system has been created for zero-liquid discharge use based upon a series of scraped-surface heat exchangers. Vapor compression evaporation can recover up to 95 percent of the wastewater as distillate. Any remaining concentrate then can be treated physically or chemically to produce solid residues (such as crystals) and water.

Running the evaporators at lower pressures means that the boiling point of the liquid being treated is reduced. This means that multi-effect evaporation can be made possible; that is, steam from a previous evaporation stage is used as thermal energy in the next stage, which works at a lower boiling point. This way, multiple evaporation stages are combined, generating energy savings. For many components, crystal precipitation is favored at lower temperatures because lowering evaporation temperatures helps to increase the solids yield. 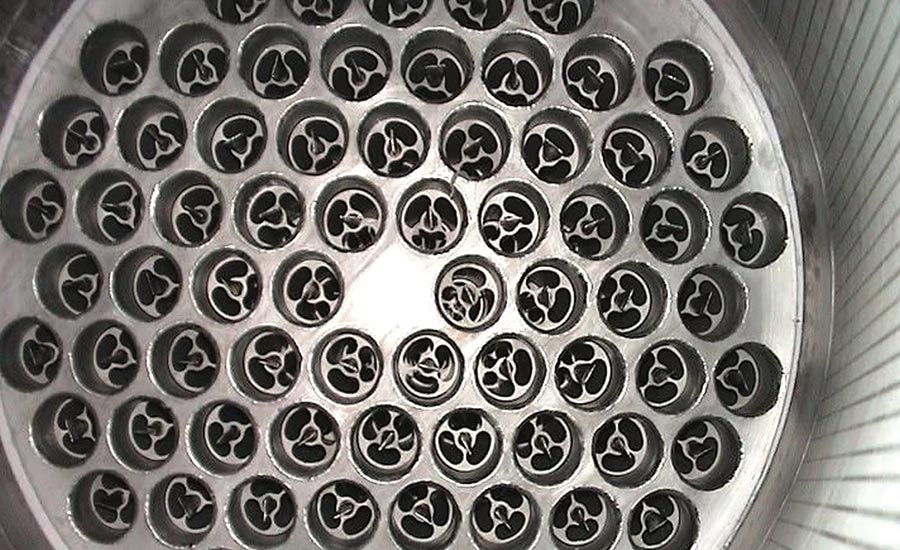 The scraped-surface heat exchangers use a reciprocal scraper to reduce fouling, which results in effective heat transfer and efficient crystallization. Using this heat exchanger in zero-liquid discharge applications also means that heat from process water and other existing sources can be used to drive the evaporation process, along with the recapture and reuse (regeneration) of any heat left at the end of the process. A typical process consists of three steps:

When used in zero-liquid discharge applications, the heat exchanger is combined with coolers and custom-designed crystallization tanks. The result is an efficient process that can work continuously without requiring scheduled downtime.

The ability to use “free” heat as the basis for a zero-liquid discharge system can alter the economics of such a project. In some cases, it makes this technology available to a wider range of businesses and industries than might previously have been the case. As well as reducing the energy costs of running such a system, a well-designed zero-liquid discharge plant will provide other benefits in terms of resource use and savings in raw materials such as water.

Every cubic foot of recycled or reused water results in a corresponding reduction in mains water demand and wastewater discharge. There also are benefits in terms of the energy and carbon footprints associated with material recovery when compared with primary extraction and processing, together with further environmental benefits arising from reduced waste disposal impacts. Researchers are increasingly identifying food processing and supply chain waste streams as a major resource for the development of bio-based products and processes, suggesting that the valorization of food waste should focus on both commodity and higher-value specialty products.

When taken together, all of these factors mean that even if you have previously discounted zero-liquid discharge technologies on the basis of cost, it may be time to reevaluate them. If you are involved in an industrial process that creates liquid waste streams and have never consider the feasibility of zero-liquid discharge in your business, now is the perfect time to do so.

Matt Hale is the international sales and marketing director with HRS Heat Exchangers, Atlanta, a manufacturer of thermal processing technologies for the food and beverage industries. For more information from HRS, call 770-726-3540 or visit www.hrs-heatexchangers.com.