This website requires certain cookies to work and uses other cookies to help you have the best experience. By visiting this website, certain cookies have already been set, which you may delete and block. By closing this message or continuing to use our site, you agree to the use of cookies. Visit our updated privacy and cookie policy to learn more.
Home » Industrial Controller Connects Edge Data with IIoT
TechnologyProcess ControlPower ControlsAll Process Industries
Industrial Internet of Things

In 2018, a glass products manufacturing company in Ohio presented its automation engineers with a new project: Data from manufacturing lines needed to appear in a web-based user interface (UI) already in use by company supervisors. The UI showed production goals and sales data for the company database. Supervisors needed to see real-time production figures, compare them to goals and actual sales, and adjust production accordingly.

How hard could it be? Almost everything was on the premises. The automation and IT teams settled into connect the systems.

First, field devices on the manufacturing lines were wired to local programmable logic controllers (PLCs), with field-device values in counts. Next, getting data from the PLCs required device-specific communication drivers. The engineers purchased and installed them, chose the desired points and mapped the points into a spreadsheet. Data-in counts had to be converted to engineering units.

Third, the PLC data was networked to a PC-based human-machine interface (HMI) and a supervisory control and data acquisition (SCADA) system. These systems required the engineers to configure data tags, drivers and polling-rate assignments. Then, working with the IT department, the engineers also configured the HMI and SCADA system to transport the data into the company database. One final adjustment was that additional programming was required to make the data available to supervisors.

Though expensive and complicated, it worked. The automation engineers and IT personnel could get back to other projects they had put on hold while they worked this out. Though they wished there had been an easier (and possibly less costly) solution, the project objectives had been met.

But then, the company realized that the supervisors needed more information from the manufacturing lines as well as a way to control some process elements. In addition, new production lines were being planned that would be used to manufacture a different kind of glass. The new lines would require control and a similar complex architecture to share data with the supervisors’ interface.

These types of issues often arise in Industrial Internet of Things (IIoT) implementations, but there are ways to address them.

The Challenge of the IIoT

The extent of these factors is not often not obvious before a project begins; instead, each becomes apparent once the project is underway. Data-intensive automation applications — part of the Industrial Internet of Things (IIoT) — often end up involving far more complexity, many more security risks and a much greater investment in time and money than many companies want to expend. 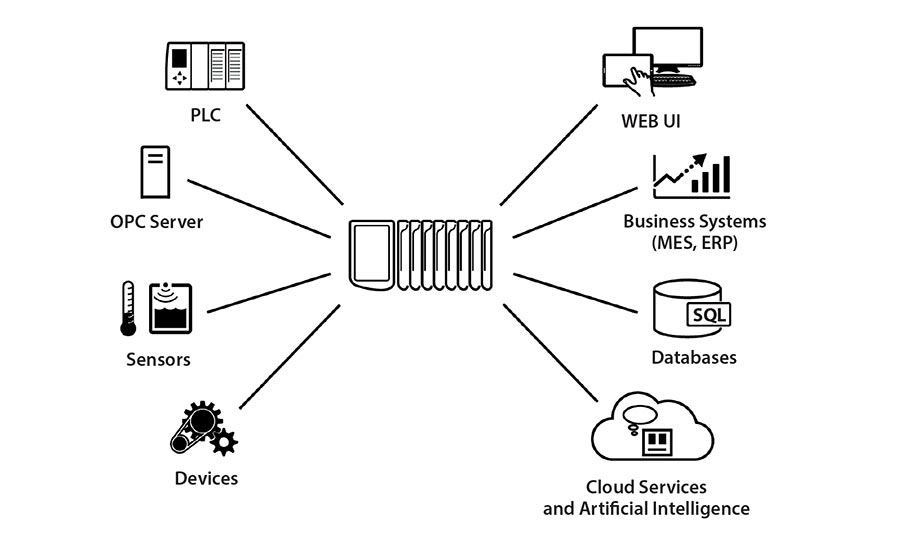 The company already uses PLCs to control their existing manufacturing lines. An edge programmable controller was used to connect the existing PLCs and communicate data. When new lines are added, the edge controllers can be connected directly to sensors and actuators (without PLCs) to provide control while communicating data wherever it is needed.

Getting data from the edge of the network — from the sensors and actuators in factories and remote sites — to the databases and the people who need to use the data can be daunting. Bidirectional communication — for control as well as monitoring and data acquisition — can be even tougher. Most control systems and equipment use protocols and networks proprietary or specific to automation — Ethernet/IP, Modbus, Profibus, serial, OPC or others. But, computers and mobile devices use standard Ethernet or wireless networks, along with open protocols and standards.

Translating data between these systems and moving data where needed involve middleware — computers, gateways, drivers, parsers, customer software and licenses — and their related expenses. As soon as data moves outside its immediate network or off premises — for use in the company computer network, remote locations or on a tablet or smartphone connected to the internet — middleware increases, and security concerns balloon.

Automation and the IIoT

Both PLCs and programmable automation controllers (PACs) have been used and improved over many years. They now incorporate capabilities formerly found only in SCADA systems, share communications with Microsoft Windows-based HMIs, run on standard Ethernet networks and offer other enhancements.

But, more is needed from industrial automation systems. For the kinds of applications seen now and in the future, simplified connections and communication are needed. Solutions that shrink or eliminate the middleware — to help reduce costs yet let users move data from where it is produced to where it is needed in fewer steps — can better serve process applications. 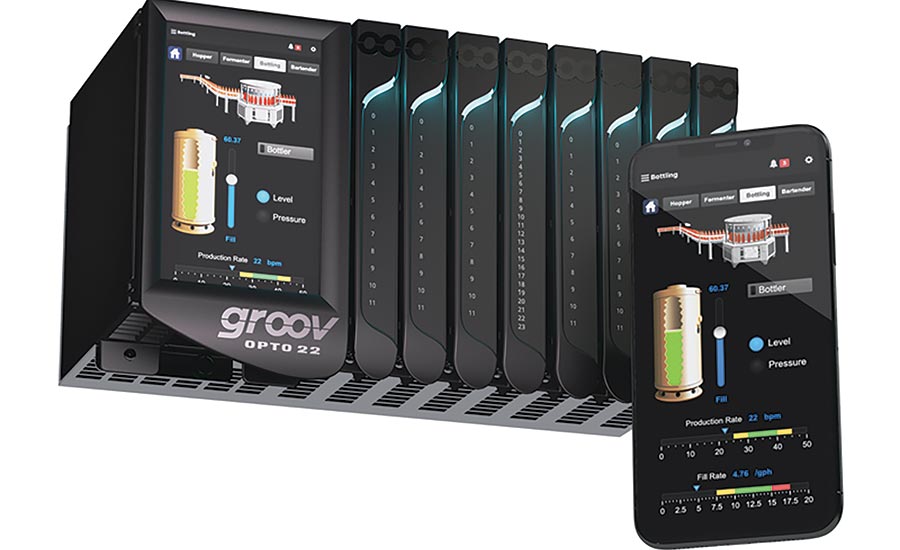 Addressing Challenges for the Glassmaker

So, how did an edge programmable industrial controller help the glass products manufacturer?

The company already used PLCs to control its existing manufacturing lines. The edge controller was used to connect the existing PLCs and communicate the data. Once the new lines are installed, however, the manufacturer will not to need to purchase additional PLCs. The edge controller can be connected directly to sensors and actuators to provide control while communicating data wherever it is needed.

Because the edge programmable industrial controller provides data in standard engineering units, conversion software is not required. Once configured with plain-language names, I/O channels are available automatically as tags in all of the software.

Incorporating production goals and sales data from the company’s database can be simplified with the edge programmable industrial controller. The revamped system includes software to acquire data through prebuilt nodes. Data from all sources — PLCs, sensors and devices wired to the programmable controller, the company database and other platforms — is made available to authorized users in the HMI software.

Utilizing devices such as an edge programmable industrial controller may help simplify future changes or expansions. In addition to providing connections to PLCs, databases and an HMI to provide real-time control, such controllers can be used to move data among OPC servers, business systems like manufacturing execution systems (MES), enterprise resource planning (ERP), cloud services and software. Data from new sources can be added to the system without middleware. IIoT connections are encrypted and authenticated. New data, controls and authorized users can be easily added to the HMI, with changes pushed out to users.

In conclusion, modern controls exist that allow users to collect, process, view and exchange data where it is produced — at the edge of the network. Working with the data where it is produced eliminates concerns about latency. The controller can securely share data among databases, cloud platforms, web services, PLC systems, and other systems and equipment, using open, modern communication standards. Users can visualize data on the controller’s integral touchscreen, an external HDMI monitor, or from any web browser or mobile device. Features such as a real-time, open-source Linux operating system; multi-tasking real-time control engine; and dual independent gigabit Ethernet network interfaces to help securely segment your control network from your business network — yet allow data to be shared.

Features such as a mandatory administrator account and built-in firewall can help plants ensure communications are encrypted, user authentication is required and inbound connections are blocked by default. Also, a controller with more than one independent network interface can keep the control system network segmented from untrusted networks.

Process visualization is key to IIoT implementations. Features allow the HMI to run on the controller’s touchscreen or remotely on a computer or mobile device with a web browser optimize access. The edge programmable industrial controller can include data and controls from equipment, software and online sources. Data from an edge programmable industrial controller also can be used in other systems via ports on the controller, software or protocols.

Modularity allows I/O to be adjusted to meet changing needs or allows expansion of the control system. The edge programmable industrial controller can act as a supervisory controller, or each can run independently and share needed data.

Benson Hougland is the vice president, marketing, with Opto22. The Temecula, Calif.-based company can be reached at 800-321-6786 or visit www.opto22.com.