This website requires certain cookies to work and uses other cookies to help you have the best experience. By visiting this website, certain cookies have already been set, which you may delete and block. By closing this message or continuing to use our site, you agree to the use of cookies. Visit our updated privacy and cookie policy to learn more.
Home » Reducing the Carbon Footprint of Heavy Industry
HeatersChemicals/PetrochemicalsOil & Gas / Ethanol / BiofuelsFinishing (Paint & Other)
Industrial Heaters

An electric heating technology may help reduce carbon dioxide emissions and the reliance upon fossil fuels in petrochemicals, steel and other industries.

Industrial heating can be obtained through various technologies such as fuel, electricity and steam as well as hybrid technologies that combine two or more technologies. Fuel-based heating technology is the most common today due to the relatively low prices of fossil fuels.

As the requirements for carbon reductions increase, fuel-based heating is being challenged. Heavy industries such as petrochemicals, steel and cement account for a substantial portion of the world’s carbon dioxide emissions. Recognizing this and desiring to reduce CO2 emissions, two engineers that live just 68 miles (109 km) south of the Arctic Circle developed a heating solution that has the potential to help with the shift to fossil-free heavy industry.

Electric heating allows for lower carbon dioxide emissions, improved throughput and higher quality, just to mention a few advantages. As a result, even the most energy-consuming industries may look to convert from fossil fuels to electricity.

Green Steel Industry: Is It Possible?

In 2012, Swerim, a Swedish metals research institute, started a project to design a fluidized bed. The organization needed an effective heater to heat air and gas into the reactor. An engineer working at Swerim at the time, Thomas Olsson, developed a prototype. Simulations using computational fluid dynamics (CFD) showed that the efficiency of the prototype was high at nearly 100 percent. In addition, despite the high temperature increase, the surface of the heater remained so cool that it was possible to keep a hand on it during the process.

Olsson saw the potential of using the same technology for other applications. He sought and received permission from Swerim to file a patent for the heater and develop it further in a company created by him and another inventor, Ralph Nyström.

“Heating of process gases has always been a hot topic. There just hasn’t been a good solution for the reactive gases,” says Nyström.

As it happened, the heating system developers lived and worked in Luleå, Sweden, not far from one of the production facilities of the largest steel sheet manufacturer in Scandinavia. Given that SSAB is one of the major employers in the region, the developers felt the steel industry was a good place to begin applying the technology.

Steel can be produced from steel scrap or iron ore. Scrap-based production is fossil-free, provided that the electricity used in the arc furnaces is made from renewable energy sources. Iron-ore production, by contrast, emits CO2 in the reduction of ore to iron. This process takes place in blast furnaces by removing the oxygen from the oxide iron minerals with the help of coke. 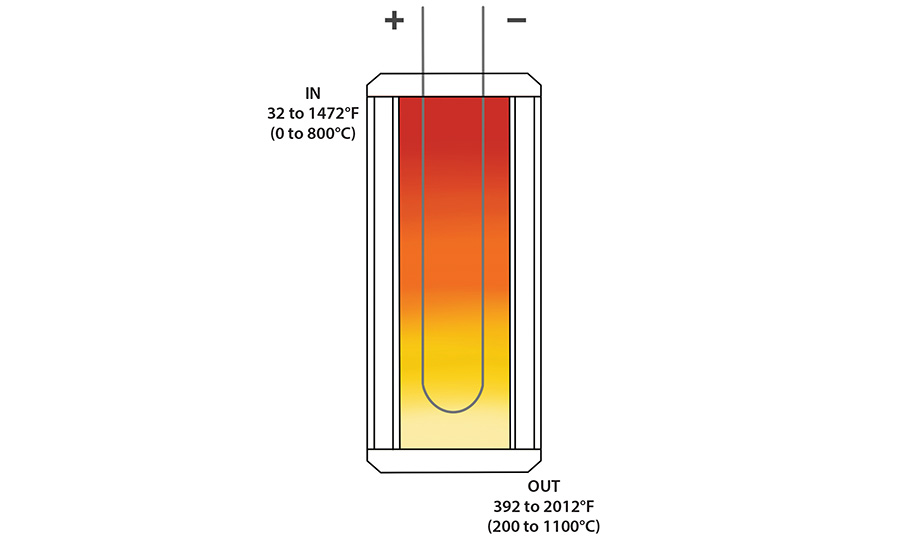 SSAB is well aware of the fact that the ore-based steel industry is one of the highest CO2-emitting industries. It accounts for 7 percent of CO2 emissions globally, according to HYBRIT. If successful, HYBRIT will help to reduce Sweden’s CO2 emissions by 10 percent and Finland’s by 7 percent. In addition, it will create the opportunity for iron-ore steel producers around the world to convert to the greener technology.

To succeed, an efficient electric heating solution is required to heat up the hydrogen. Due to the gas’s reactivity, the heating solution must be able to work in hazardous environments, be explosion classified and be approved for pressurized vessels.

The heating system developers proposed an application for their heater to be used in a process based on reduction of iron oxide with hydrogen. Reduction of iron oxide with hydrogen has an endotherm reaction that must be supported with more energy than heating of the charge. About 15 percent of the total electrical energy is required for heating and reduction and about 85 percent is required to produce hydrogen. 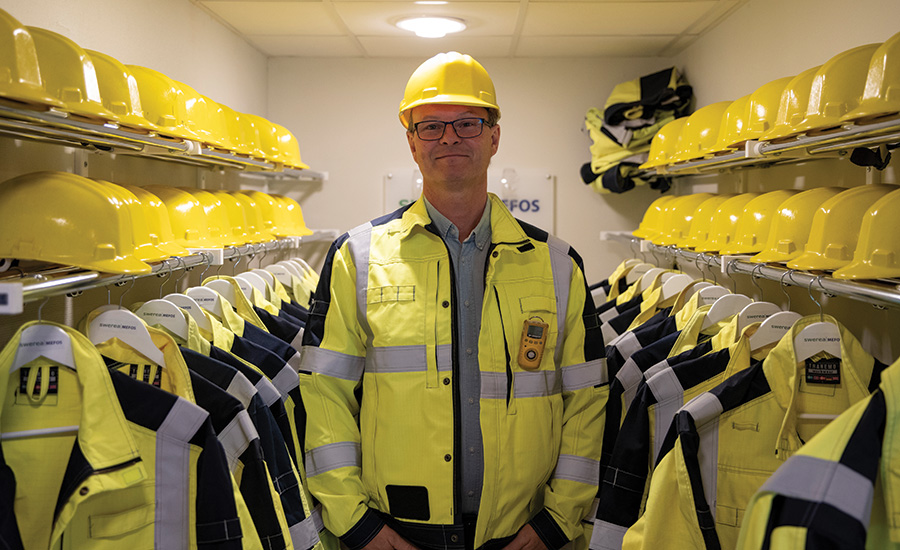 Thomas Olsson developed the first prototype of the electric gas heater in 2012. It was highly efficient from the start.

Reducing Emissions in the Cement Industry

The steel industry is just one example of an application area for the electric gas heater. Cement production is another industry with heavy CO2 emissions. In this industry, the heater can be used to decompose limestone to lime in the calcination process.

For the cement industry, the heating system makers developed a process with recycled CO2 where the CO2 is reheated up to 2,012°F (1,100°C). A burning chamber fired with hydrogen and oxygen oxy-fuel, mixed with reheated CO2, produces process gas up to 2,912°F (1,600°C) that contains carbon dioxide and steam. Because the process gas contains high amounts of steam, it reduces the decomposition temperature for the limestone, and the steam can be separated from CO2 by cooling. Using renewable energy and carbon capture and storage (CCS), the process can reduce the environmental impact from the cement industry.

The combination of reheated CO2 and oxy-fuel reduces the total energy consumption, according to the developers. Hydrogen and oxygen also can be produced by renewable energy and be stored, which gives a positive impact to the national electric grid. The ratio between reheated CO2 through the heater and oxy-fuel hence be changed depending on the best process economy and the situation on the national electric grid. 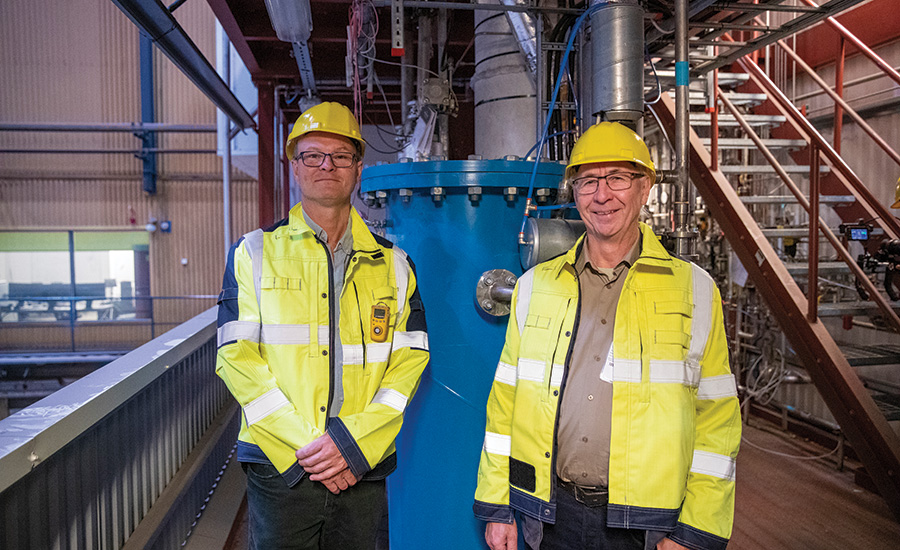 The light and compact heater has the potential to make heavy industry fossil free.

“When heating gases containing carbon, the carbon easily bleeds. The main key to avoid this problem is selecting the right material,” Nyström explains.

Hence, the material used in the solution is selected carefully, and the heater is designed to ensure that all heating elements are exposed to the same pressure. Both the steel and cement industries require high effects. By using high voltage, the heater consumes low current and, thereby, provides less energy loss. The heater is modular, which means that it is scalable from kilowatts to multi-megawatts size. Each heater can provide effects up to 35 MW.

The heater can be adapted to different production flows and gas compositions. Also, say the developers, it can handle a range of incoming gas temperatures, making it possible to reach high outgoing gas temperatures. Only standard components that have been used in heavy industry for decades are used in the design to ensure high availability and long lifetime. The heater is approved and certified by Pressure Equipment Directive (PED) and ATEX, the directive that regulates explosive atmospheres.  PH

Asa Backman is a freelance technical writer. NyCast AB is located in Sodra Sunderbyn, Sweden. The company can be reached at +46 70 627 34 53 or visit www.nycast.se.